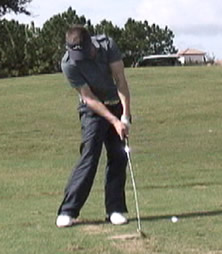 Golfers learning the Rotary Swing 1 (RS1) swing will often “over cook” certain aspects of the swing as they try and develop the new sensations of the swing.

One common “miss” occurs when the golfer hits the ball fat � when the ground is struck before the ball. One of the most common causes of this is when the arms release too early in the swing and body stops its rotation to the left.

As you have learned, as soon as the body stops or slows its rotation, the passive arms have the opportunity to “catch up” to the body and release off the chest. If the body has not properly cleared to the left to give the arms room to swing through, the club will be slung down too steeply toward the ground.

It is critical for the body to keep rotating to the left while keeping the arms passive to avoid this common miss. It is also very critical that the golfer never try and actively use the arms to generate clubhead speed as this will cause the arms to release from the body too early in the swing.

Golfers who are very focused on maintaining their spine angle throughout the swing also can have tendencies to hit the ball fat as they tend to stop rotating the body out of the way or increase the spine angle too much during the downswing.

Tiger Woods, a golfer who tends to significantly increase his spine angle on the downswing, on occasion will hit shots fat at inopportune times. At the Masters in 2005, he duck hooked a driver off the tee hitting several inches behind it and did the same thing during the 2005 Open Championship with a 3 wood off the tee on 18 on Friday.

Because his spine angle increases during the downswing, he is forced to decrease it through impact by, in essence, somewhat coming out of the shot or else he would hit the ball fat on every shot.

Keep your spine angle constant and your arms passive to start hitting the ball pure. For a practice drill, use the “Broom Golf Swing Drill” to get a feel for how to properly release the club in the swing. 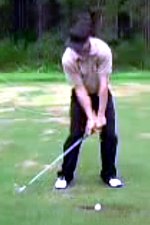 Another common miss in the Rotary Swing 1 (RS1) is for golfers to hit fat golf shots, or hit the ground before they hit the ball. Of course, they can't make solid contact. They lose all their power, they have no control over the shot at that point.

In the golf swing it's very important that you make ball-first contact, hitting the golf ball first before you hit the ground so that you can control trajectory, control spin, control the golf shot, compress the ball properly, and all these things.

In the one plane swing, golfers who tend to hit fat golf shots usually will do everything very well with their body. They'll tend to stay down through the shot, their spine angle will stay constant, they won't slide. They'll usually keep everything pretty solid.

What generally happens with the students that I teach who hit it fat is that their arms start to release very early in the downswing because they're trying to hit the ball with power with their arms rather than using their body to keep rotating through the shot. 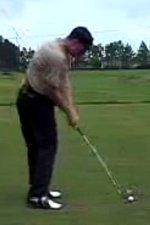 Everything in my golf swing was pretty good there, but what happened is I started to go from the top. I kept my spine angle constant, but I released my arms very hard. I stopped the rotation of my body and my arms just kind of died through the shot.

It's very, very important that you continue to rotate through the shot while keeping your arms passive so that they won't come down and release down into the ground because of course if your body stops rotating and you release your arms, I could actually hit the ground this far back.

It's important that you rotate all the way through the shot and rotate through into impact. Keep the arms passive and it will look like this.