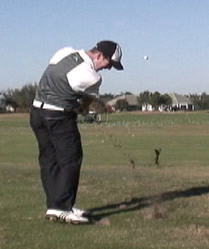 Golfers learning the one plane swing who miss to the right are often more experienced, lower handicap golfers who have been taught to swing more from the inside.

Most of these golfers come from a two plane swing background that teaches the golfer to drop the arms back down from their “high above the head” position at the top of the swing.

In order to give the hands time to get back down on plane, their hips will slide laterally toward the target while delaying the rotation of the upper body back to the target. This move drops the club back to the inside and is unnecessary in a more rounded type golf swing.

Because the one plane swing is built around a rotational action of the body, sliding the hips toward the target causes the club to be delivered too much from the inside causing blocks or snap hooks. When the hips slide toward the target, the position and angle of the spine is changed.

First, the upper spine tilts away from the target, which in turn, changes the plane angle of the shoulders. This change in the shoulder plane drops the right shoulder beneath the desired plane which, in turn, drops the club beneath the plane. From this position the golfer must rely on his hands to square the club and control the ball flight.

If the golfer does not have an overly strong grip and does not try and rotate the club face back to square with the hands, the ball will be blocked to the right.

If he does try and “save” the shot by squaring the clubface with the hands, this will cause a snap hook. Somewhere in between these two extremes is a ball flight that starts right and draws back toward the center, but the timing required to execute this consistently is not something that can be repeated over the long haul by the average golfer.

To stop missing shots to the right, maintain your angles throughout the swing. Your hips should rotate, not slide and your shoulders must rotate on the same plane back and through with no dipping of the right shoulder.

Notice in the photo above that I have rotated my body aggressively through the shot while "swinging left" but the ball has come out perfectly straight and on line with the target. This is the ideal feeling of the Rotary Swing. 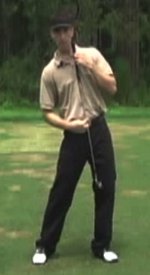 Moving base of spine toward target tilts spine & shoulder plane

Golfers who struggle missing shots to the right in the one plane swing, or blocking shots or blocking cutting shots, typically have one main culprit in their golf swing, and that is for their hips to move towards the target during the downswing.

When you move that base of the spine, you not only shift your center of gravity, but if I put a shaft down the center of my spine and I shift just the base of my spine towards the target, my spine shifts away from the target.

When that happens, that tilts my shoulder plane back. When my shoulder plane is off level, the arms drop and the club shaft of course has to drop, and then I come too far from the inside and I block it out to the right. 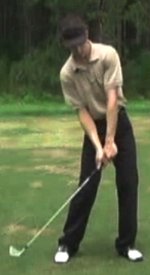 Arms drop & shot comes from inside

There I slid my body through impact. I blocked it out to the right, and the only way I could have saved that shot is to try and rotate my hands aggressively through impact, which of course is difficult if not impossible to time consistently.

In a one plane swing, it's not necessary to slide your body through impact. In fact, just the opposite is true.

You need the base of your spine to stay centered so that you can rotate around it so that you're your angles stay constant throughout the swing, rather than sliding and trying to save the shot with your arms and hands.

All we need to do, for golfers who block shots to the right consistently, is to quiet these hips down and learn to rotate around the body, around the spine, rather than shifting and then trying to rotate.

You can't aggressively slide through impact and turn at the same time. You have to be always rotating in this one plane swing, and sliding keeps you from doing that. 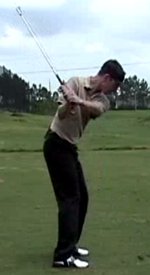 All you need to do, for golfers who consistently miss to the right, is you're actually going to feel like - if you look down the line here - it's going to feel that your shoulders are moving more out over the top of the plane.

You're going to feel like you're actually coming over the shot, rather than inside and dropping this right shoulder, dipping it down, changing the shoulder plane, changing the path of the club and coming too much from the inside.

Get Your Free Membership to Watch "Day 7: High and Low Draw" Right Now!