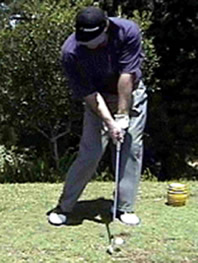 If the spine angle decreases during the downswing, often referred to as “coming out of the shot,” the club will not be able to reach the ball as the whole body has moved away from it.

There are two common causes for coming out of a shot in the one plane swing, a fear of hitting it left and simply swinging too hard by driving the lower body aggressively toward the target.

Golfers coming from a two plane swing background often feel like they are swinging “over the top” when learning the one plane swing because they are so used to dropping the club to the inside.

If the golfer actually does come over the top, the ball will go, or at least start, left of the target. However, in the one plane swing, the golfer swings in a way that feels over the top because there is no re-routing of the club with the arms on the downswing, but the ball goes straight.

When faced with a shot that would penalize a ball missed to the left, one planers sometimes don’t stay committed to the shot for fear of hitting it into trouble and will hit the ball to the right as a bail out.

The other common cause of losing the spine angle is when the golfer simply swings to hard and rotates so aggressively to the left or slides the hips so much that it is physically impossible to maintain the spine angle.

The fix for both of these misses is much the same, stay committed to the shot, rotate through it and trust it.

Another common miss in the one plane swing is for golfers to hit it thin. What I mean by "thin" is that as they're coming through impact they'll hit it a little bit low on the club face, so rather than catching it more in the center of the club face they'll actually hit it a bit low so the club face can't hit it and make solid contact.

Nine times out of 10, the general culprit of that is for the spine angle through impact to move away from the ball. What I mean by that, if you look down the line as I'm coming into impact, if I keep everything constant the club will be able to make solid contact. 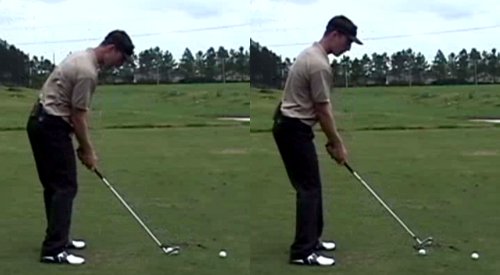 Losing the spine angle moves the club head away from the ball, causing thin shots 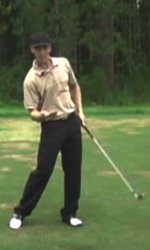 The right hip kicks in toward the target

It's important for golfers who hit it thin to stay into the shot, stay through the shot and drive through with their body, rather than coming out of the shot, kicking this right hip into the ball and losing it and hitting it thin.

To hit it thin; if you watch, I'll hit this one thin and I'll lose my spine angle through impact. Here I came out of the shot. My right hip kicked in to the target. I had no chance at hitting a good, solid golf shot.