On Days 4 & 5 we talked about how to hit the ball very, very low and very, very high. Now we're going to do a drill that's closer to an actual scenario out on the course. You're going to hit each shot progressively a little lower, then a little higher, instead of taking it to extremes.

Use Your Normal Trajectory as a Reference Point

Start by hitting a few regular shots to identify you normal trajectory. Find a reference point on the sky or horizon to mark your normal ball flight, and then you can start to fine tune it from there. 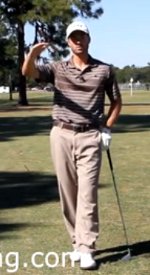 You're going to hit a series of shots at different heights. Each time you hit a shot correctly, move on to the next shot on the list. When you have gone all the way through the list, that's one round.

That's one round. You're going to do three rounds in all.

As you will recall from when we first talked about altering your ball flight, the left hand controls loft and the direction of the club face. The right arm and right hand are more passive. The right arm is just there for speed, so at this point we're mainly focusing on the left hand.

Go ahead and hit your first shot, trying for 15% lower than your normal trajectory. 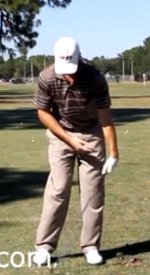 Let's say your first shot doesn't go quite low enough. As you know from Day 4, you hit low by turning the logo of your glove down toward the ground and bowing your left wrist forward to deloft the club.

As you can see in the photo, bowing the wrist causes the shaft to lean significantly ahead of the club head, which delofts the club.

Watch the trajectory of your shots, and then adjust your wrist as needed. You may not get the results you expect.

It may feel like you're bowing your left wrist a lot but if the ball is still going pretty high you'll need to exaggerate the movement, bowing it more and more until you get the results you're after.

Just watch the ball flight and adjust your swing accordingly.

Keep trying until you succeed in making a shot that's 15% lower than your normal trajectory, then move on to 30%, then 15% again, then back to a normal shot.

To go higher, you're simply going to do the opposite. Instead of feeling like you're turning the logo down toward the ground, you're going to keep the left wrist nice and flat.

However, don't be tempted to cup the wrist through impact. 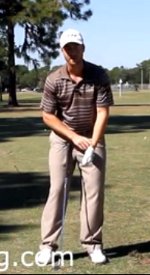 Cupping the wrist will cause you to flip the club, which allows the ball to just roll up the club face. When that happens, you lose compression and trajectory altogether.

For your highest trajectory, just keep your left wrist nice and flat so you get the full loft of the club.

The only time you would ever cup the wrist in a golf shot is if you needed to go over a very tall obstacle like a tree and had no other choice but to really add a ton of loft. That type of shot is strictly a last resort.

Go ahead and practice until you hit one 15% higher than normal, then 30% higher, back to 15%, and then end the drill with another normal shot.

As you work through this sequence remember that if the ball starts to slice or fade a little bit, you know how to straighten it out. Just roll your left hand to the left or right like you learned on Days 2 & 3.

Work both aspects together to keep a nice, straight ball flight as you to through the trajectory control drills. 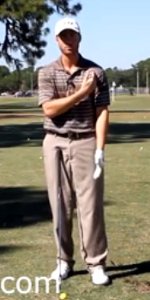 The swing arc bottoms out under the left shoulder

One thing we haven't addressed in this lesson series is ball position.

You want the ball a little bit behind that point so you can hit down and through the golf ball.

If you're trying to hit a lower shot, you can move the ball back slightly, especially if you're going for 30% lower or a stinger shot. Move it back just a little to help you hit down even more and really get a low ball flight.

But there is a limit. No matter how low you're trying to hit, never move the ball more than one ball width back. 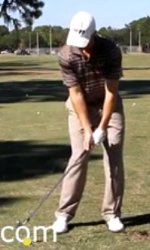 Much too far back

As you can see in the photo at left, if you put the ball extremely far back the club head would come down much too steeply as you swing down into the ball.

It's almost impossible to hit two solid shots in a row with the club head coming practically straight down like that. It's just too steep.

You'll find yourself manipulating the club, or flipping it at the bottom, or raising up. There's no telling how many compensations you would have to make to try and shallow out that swing plane.

You can see another problem if you look at the shot from down the line. The club doesn't move toward the target on a straight line. It swings around your body in an arc from inside, to square, then back to inside.

We see people put the ball extremely far back all the time in an effort to go lower and lower. They move it way, way back, almost off their back foot. 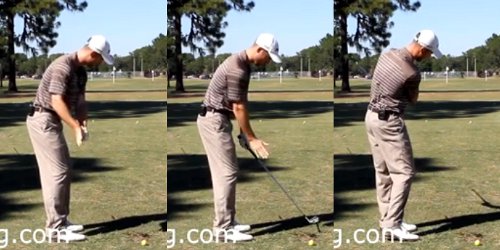 Not only does this cause the club to come down very steeply, as we saw in the first photo, it's also going to mean the club is swinging out to the right because it's still coming from the inside. The club hasn't gotten out in front of you yet. 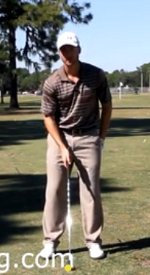 Now you're going to have to make a ton of compensations to straighten out that shot.

When you're moving the ball back to help lower the trajectory, don't take it any farther than one ball width.

The same is true when you move it forward to try to raise the trajectory, and for the exact same reasons. Never move the ball more than one ball width forward of the normal ball position.

If you go too far forward the swing plane will be too shallow and you'll hit a lot of thin shots. In addition, you'll be swinging to the left as you come through and, again, you'd have to compensate for all of that.

Go ahead and work through the trajectory drills, hitting shots through the sequence outlined above.

Tomorrow is Day 9 - the culmination of this lesson series. Tomorrow you will learn the same drill Tiger Woods uses to help practice his ball flight.

This final exercise will really show you your strengths and weaknesses and allow you to analyze your ball striking. You will get a score that allows you to track your progress, as well as learning what to work on in order to improve the most and fine tune your new skills.

Get Your Free Membership to Watch "Day 8: How to Shape the Driver" Right Now!