Day 3: How to Hit a Fade Shot in Golf

Welcome to Day 3 of the "9 Days to Amazing Ball Striking" series. 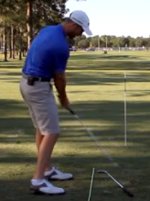 Yesterday we discussed how to draw the ball. Today we're going to reverse that and learn how to hit a fade.

A lot of golfers are already pretty familiar with hitting a fade. We're going to learn how to do it correctly and give you some drills.

You'll practice hitting a fade the right way and learn to do it consistently.

The principle and the technique of hitting a fade is basically the reverse of the technique you learned in yesterday's lesson to hit a draw.

The Opposite of Day 2

Instead of rolling your left hand to close the face and release the club, today you're going to keep your hand a little bit open. 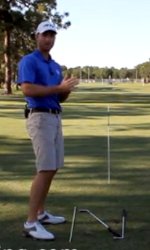 The back of your left wrist will point up at sky. This keeps the club face open, pointing off to the right.

When the club head swings left while the face points right - at the target or even to the right of the target - the ball starts left and then curves to the right.

As we discussed yesterday, the greater the discrepancy - the larger that V - the more spin we put on the ball. With the club moving left and the face pointing right, we're going to get some left-to-right spin that will allow the ball to fade right.

We'll do the same drills we did on Day 2, but reversing the direction.

Just as you did yesterday, take a normal, neutral grip with your left hand and hold the club out in front of your body with the face completely vertical. 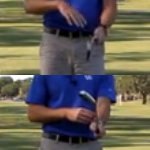 Now roll your hand open - to the right. You're letting your left wrist rotate clockwise, which opens up the face.

However, there is one difference between this and the Day 2 drill. We don't need to over-exaggerate this movement like we did with the draw, so you're only going to open the club face about 45 degrees.

Most people don't have that much difficulty getting a little bit of fade on the golf ball. At some point in your golf career you've probably already hit a fade, so this is going to be fairly familiar to most people. We don't need to go to extremes to over-exaggerate the movement patterns.

Just rotate the face about 45 degrees open. Go ahead and do 20 reps of that, then you can move on to Step 2.

Get out your impact bag and do the same drill as yesterday, making mini swings with just the left hand. 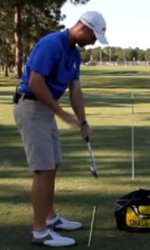 As you come down, concentrate on the feeling of keeping the club face open. The back of your left wrist should face out in front of your body so the heel of the club leads the way as you come down.

The club face should be about 45 degrees open when you get down into impact. Stop at impact and hold your position to check the club face and make sure it's open.

It's not very difficult to do. Most people have done this at some point in their golf career.

Just feeling that the heel of the club is leading the way as you're coming down through impact may be all it takes to leave the face open.

In Step 3 you'll make some small swings with the left arm only. 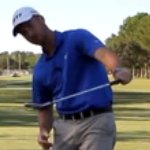 Imagine holding a cup of water on the club face

As you come up through the impact position, focus on holding the face completely open so the club face points straight up at the sky at the end of the swing, when the club is parallel to the ground.

A lot of golfers find it helpful to imagine setting a cup of water on the club face. As the club head comes through, it should be flat enough to hold a cup of water. If you released the club like you did with the draw, you'd dump the water.

You can also use your wrist watch or the back of your left hand to get the same kind of visual. If your watch and the back of your hand point up toward the sky, then the club face will to be open and you'll be able to hit a fade.

Now you're ready to do the full drill and hit a few shots. The first thing you need to do is make sure you're swinging to the left. 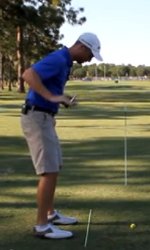 Line up square to the target line

Get everything lined up so your feet, hips and shoulders are all parallel to the target line, where the stick is.

You're going to swing to the left, so your arms will come out and your shoulders may open a little bit. Swing left and just feel that you hold off the release of the club, the same as you practiced in the drills.

Start out with a nice, easy little swing the left, holding the face open. Your ball should start to the left of the stick and curve right.

As you become comfortable, speed up a little until you're making full swings. Work on the fade until you're able to make 20 full swings where you swing to the left, hold the face open, and hit a nice little cut. 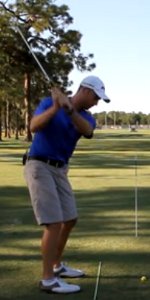 Swing to the left

If you have a tendency to take great, big divots and hit really big slices, you're probably coming pretty far across the ball.

You know now that you can compensate for that. If you want to straighten out your ball flight you can go back and work on the Day 2 drills to straighten it out with a draw.

Go ahead and hit 20 full swings, starting the ball out to the left and fading back to the right. Again, it doesn't matter at this point whether the ball curves a ton or just a little. As long as it's curving, that's good for now.

Work on your fade and then we'll be ready to start talking about controlling trajectory, hitting your shots higher and lower on Days 4 & 5.