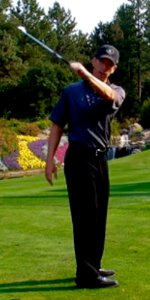 Swinging the left arm is one way

Many golfers are confused about the term "swing plane." It's used a lot; Ben Hogan is credited with coining the term in relation to golf instruction.

The swing plane is vastly misunderstood. How do we create a swing plane? Why does it matter? What do we do with it once we have it?

Today we're going to look at how to create the swing plane correctly. It's very, very simple, and it's probably nothing like what you think.

The problem is that just swinging that arm creates unnecessary movement. All the movement in that left-arm swing comes from the left shoulder socket - that's what creates this type of swing plane.

Two Ingredients for the Swing Plane

Creating a proper swing plane is actually even simpler than that. The plane in a golf swing is made up of two types of movement:

Of course the vertical aspect could be created by the left arm swinging and across the body, but that's not the best way. Right elbow flexion makes the whole thing simpler and more consistent. 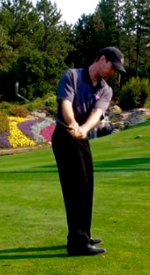 See for yourself. Get into your setup position and just start with a simple rotation. Hold your arms still and rotate your upper torso back and forth.

Rotation provides the depth of the swing plane. As you rotate - with no shoulder elevation or right elbow flexion yet - the club will follow a small swing plane.

Granted, it's a very shallow one. The club is not getting up into a good position, but it is in fact singing on a little plane, just from the rotation.

That's rotation, the first part of the plane we're trying to achieve in the golf swing.

Now do the elevation. Stop rotating and get back into setup position. Hold the club in your right hand and just do the shoulder elevation and right elbow flexion. The club simply moves up and down.

That's the vertical component of your swing plane. Elevation gives the swing plane its height.

Put it All Together 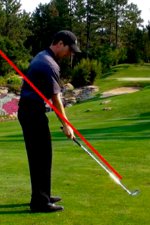 Now we'll combine the two. You're in your posture, doing the elevation. Continue the elevation and right elbow flexion, up and down, and now add the rotation back in. The right arm movement creates height, and rotation provides depth. Just put them both together.

But when you put them together, around and up, in fact you create a proper swing plane without even trying. It's that simple.

It's just your right elbow flexion, a little bit of shoulder elevation, and pulling your right shoulder blade back.

Why is This Better?

Again, you could create this same motion with your left arm. Why not do it that way? 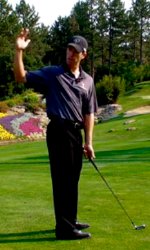 The right arm gets pushed back

The catch with what we call a "left-arm push" is that when you let the left side dominate in order to create the swing plane, it means you're pushing from the left.

That typically causes your head to move off the ball and, more importantly, it forces the right arm back and away. The swinging of your left arm creates a lot of momentum - too much for the right elbow to fight - so it gets stuck back behind your body.

We see a lot of amateur golfers get to the top of the swing with their right arms buried back behind their bodies. Then they either get stuck coming down or they come over the top. It's almost always because they're trying to create a swing plane with the left arm.

Focus on the Right

We teach you to create a swing plane by focusing on the right side, pulling back with the shoulder blade instead of pushing over from the left.

When you concentrate on keeping the right arm in position, creating the right elbow flexion, and rotating correctly, the swing plane is created automatically and you get into a perfect position at the top instead of being buried.

We've been practicing with the right hand only because it's a right-side dominated move, but when you put both hands on the club it's still the same thing. Put the left hand on there but keep focusing on the right side. The left side barely does anything.

Even with your left hand back on the club, don't go back to thinking of your left arm swinging around your body to define swing plane.

If you do, you get your left side pushing across your body, forcing your arms and hands deep behind your chest and getting the club stuck back behind you, all the while trying to learn to coordinate a left arm movement that's unnecessarily complex.

Get Your Free Membership to Watch "Creating a Swing Plane" Right Now!