How to Improve Your Distance Control in Putting

With a conventional putting stroke all your feel, touch, and distance control is done with the hand that most instructors tell you to take out of the putting stroke! 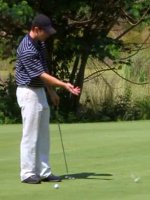 Rolling a ball with the dominant hand

With the conventional stroke, your trailing hand - the right if you're right handed - is responsible for the feel and touch of the stroke. It is critical for distance control in putting!

That's actually great news. Think about it - if you're right handed and someone asked you to pick up a ball just roll it to the hole, you'd probably do it with your right hand. You wouldn't take it in your non-dominant hand and backhand the ball toward the hole - that wouldn't make any sense.

The good thing, since most golfers are right handed (if you're left handed, just apply this to your left hand) is that your sense of touch, your dexterity, feeling, control and sensitivity, all reside there in your right hand. 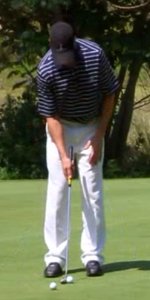 Look at the best putters in the world; Tiger Woods is a great example. When he goes to a new course to practice and get the feel for the speed and touch of the greens, he'll practice for 30 minutes using his right hand only to learn distance control on the greens.

He'll hit little right handed putts all day long, just working on the feel and his sense of speed and touch with the right hand, until he feels like he's got the speed of the greens down.

Why does he do that with just the right hand? Obviously that's the hand he feels he has the most sense and touch and control in the putt, and of course he's right.

Again, if you were to throw a ball you would rely on the sense of touch, the feel and control of the right hand. The thing is, most instructors teach golfers to basically take that right hand completely out of the putting stroke.

What About the Yips in Putting? 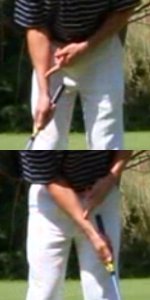 As they get older, a lot of golfers say the develop the yips in putting. That's nonsense. The yips are nothing more than a flip of the right hand.

The yips are just a result of being nervous about something - being too concerned about the results - and flipping the right hand.

In these lessons we're concerned with the process, which in this case is to take that right wrist, hinge it back slightly, and let it release slightly. As you're learning how to putt correctly, you need to allow for a little bit of hinge in the wrist.

Now, that's going to terrify a lot of you, especially if you've struggled with the yips, but just like anything else you can learn to develop the correct movements, and when you do the yips will go away and your distance control will improve instantly.

Hinge & Release in the Putting Stroke

That little bit of hinge and release is going to take the sense of touch and control that you naturally have in your right hand and put it to use in your putting stroke so you can finally control your distance.

It's just a little bit of hinge in the right wrist and a little bit of unhinge through. Obviously you're not flipping it through, but as you let it hinge back slightly you get some feel in that wrist. As you come back through, it simply allows you to give the ball a little bit of a strike. 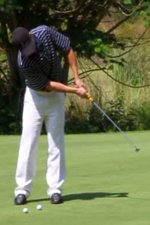 Head moves all over

If you've been taught to just rock your shoulders and you're trying to hit a 40-foot putt without using your wrists at all, your putting stroke is going to be really awkward.

Your head is going to be moving all over the place. As your eyes are moving you end up changing your perception of the line of the putt because your shoulders are rocking so much, and we obviously don't want that.

Instead, just get that little bit of hinge and release. Your follow through is completely under control. There's no need for a big, long follow through on a 40-foot putt; that would be silly.

Allow your right wrist to hinge back and through and give the ball a nice swift strike, with just a little bit of wrist hinge and a little bit of release coming through, like Tiger or Faxon. That's what you want in a conventional putting stroke.

Practice like this, working on getting a feel for that slight hinge and release. Once you're comfortable with that, it's time to develop a feel for hitting your putts in the center of the face.

Center of the Putter Face

If you're used to just pulling your left arm through in your stroke and rocking your shoulders, you may have a hard time hitting the center of the face. As soon as you start allowing the wrist to work back and through, you'll notice that you have a lot more control.

Fortunately, our friends at Eyeline Golf have developed the Sweet Spot 360, a simple little training aid that will help you with this step.

Simply peel off the backing and stick the device onto your putter face - they're all reusable several times. With the Sweet Spot 360 in the center of the face, when you mishit it - either on the top, the bottom or sides - the ball will go offline.

Try it yourself; if you hit a putt high on the face or off the toe the ball won't go very far because the Sweet Spot 360 is padded to cushion the blow of the strike. It will only roll normally if you accurately hit the center of the putter face. 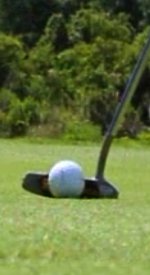 This device provides instant feedback, both through the ball's response and through the sound it makes. If you don't hit the center of the face you won't hear a solid strike. It will hit the padding and sound like a dud.

This will help you develop the feel and sense of control in your right hand because when you hit the center of the face you'll hear a normal strike sound, and f you miss it, it will sound off and won't go anywhere.

Once you're comfortable with the right hand only, try putting your left hand back on the putter without losing that sense of feel and control in your right hand as you practice hitting your putts.

Work with the Sweet Spot 360, do some right hand only drills, and watch your distance control improve dramatically.