Forearm Rotation in the Golf Takeaway for More Power

Don't let this happen to you..rotate your forearms properly!

Do you have trouble getting effortless power through the ball?

If so, you may have overlooked the role of golf forearm rotation during the takeaway, a key to achieving a powerful release.

I'm sure you understand that counter-clockwise rotation (for righties) must happen in the downswing.

However, you MUST get in the proper position in the backswing to prepare for it by rotating the forearms during the takeaway.

But fear not, there's good news:

It can be much easier than you might've thought to correct the position you see below. 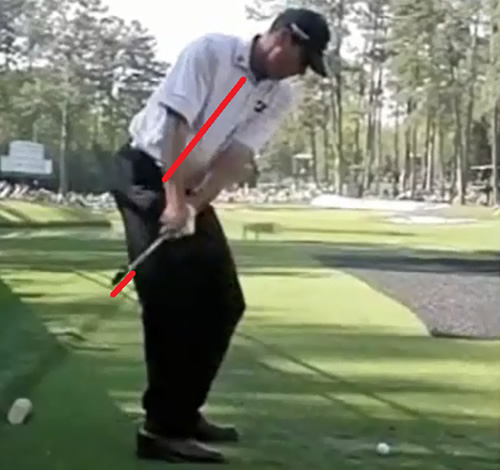 Matt Kuchar's takeaway forces him to do all his forearm rotation late in the backswing. He practices enough to pull that off. It doesn't have to be that hard.

On a daily basis, I see players with a closed face like this during the takeaway, indicating a lack of early clockwise forearm rotation. This even seems to be what a lot of instructors are telling you to do.

Such golf instruction would have you match the club face with your spine angle at the completion of the takeaway, as Matt Kuchar demonstrates above.

Even though Kuchar obviously manages to make an effective golf swing this way, when you think about this from a biomechanical standpoint, it doesn’t make much sense to match the spine angle.

After all, you're not going to match your spine angle the entire backswing; you must rotate the forearms at some point.  Even Kuchar eventually does.

So, you might as well use forearm rotation in the takeaway to help build power and consistency in the golf swing.

"I started rolling my forearms more on the takeaway and doing the thumbnail [thing]. It took me from a weak slice to a strong draw."
-Matthew L. | Aug 12, 2012 | Charleston, SC

If you don't rotate your forearms early in the backswing in golf, the forearms will be forced to rotate much more in the last half of the backswing, which can be tough to time.

Or even worse, you may not rotate them at all, sabotaging your power.

In the picture below, you can see how Trevor Immelman performs this move correctly. 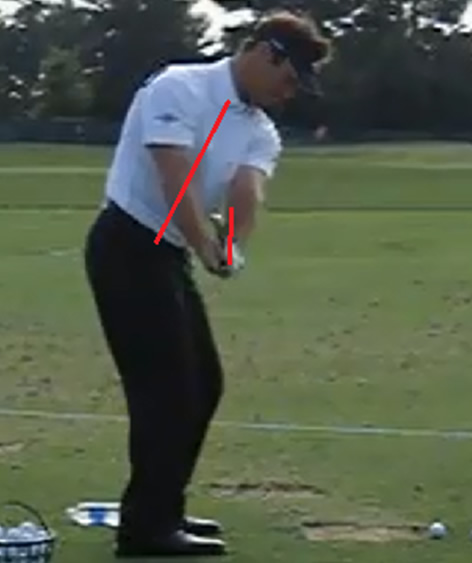 Trevor Immelman's takeaway demonstrates proper forearm rotation to get the club in a "toe up" position. This will help him produce more club head speed later.

He's now got the ability to release his forearms aggressively on the downswing and gain easy power.

In fact, the toe of the club can move as much as 20 mph faster than the hosel. Wouldn’t you like to tap into this easy, consistent golf swing power?

Watch the golf instruction video now to find out how you can enjoy all this using your...thumbnail!

(Yes, it sounds ridiculous, but I've helped several students instantly fix their forearm rotation issues with this one swing thought about the thumbnail.) 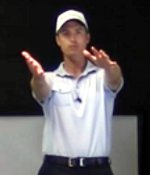 The first thing we need to understand about golf swing forearm rotation is that, as the club goes back, the forearms are going to rotate about 45 degrees. As I mentioned, this sets the club on plane.

As we come down we're going to need to release this rotation, and that's what's going to increase club head speed. Imagine, if you take this club right out in front of your body and you rotate your arms 45 degrees, that's essentially what's happening during the backswing. 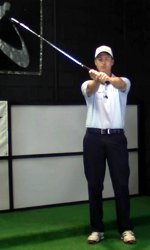 To further understand how this actually works, I want you to grab your right wrist. You'll feel this bony protrusion at the bottom of your right wrist here. This is your ulna. This is the bone that's on the outside of your forearm; your radius is on the inside of the forearm.

You can feel, as you twist these back and forth that these rotate on top of each other, one way or another way, and that's what helps the forearms rotate in the golf swing. As I'm doing this, you'll notice my upper arm is not rotating. My forearm can rotate independently.

Your upper arms also have a job to play in this rotation, especially the left arm. My left elbow here, and my upper arm, is going to rotate a bit internally to help set that club on plane during the backswing. That's what's going to help rotate the arm. 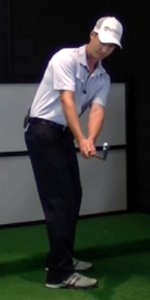 The club face is vertical at completion of takeaway

Most of the right arm rotation in the golf backswing is going to happen just from the wrist, and the radius and the ulna, as we talked about before.

The tip for today is a great checkpoint, and a very easy visualization to have. It's to do with the right thumbnail. As we go back to the completion of the takeaway, a couple of things need to happen. One, the face needs to be vertical.

This face needs to be rotating until the completion of your takeaway. That face is vertical on the club. If I do this correctly, if I have a neutral grip, my right thumbnail is going to be facing straight up toward the sky.

Let me do this again for you, in slow motion. As I turn back, I'm really focusing on this right shoulder turning back. I'm getting a little bit of forearm rotation so that my club head is vertical, and now the nail of my right thumb is facing straight up toward the sky.

If I don't get enough rotation of the golf club during the takeaway, the club is going to be shut, as I see almost every day in the swing reviews - pretty much every day - and this thumbnail is now going to be pointed over in front of my body.

One of the reasons this all came about was, a lot of golf instructors tell you to swing the club where, at the completion of the takeaway, the club face matches your spine angle. This simply isn't true. If I went by this ideology, the club face would match my spine the entire swing, and I think we can all agree that this is...I'm not even sure if that's possible, but definitely not the ideal position to be in. We need this face to rotate open, and then closed, so that we can pick up some club head speed.

If I do it correctly, my hands are a bit below my waist, I'm at the completion of the takeaway, and my right thumbnail straight up toward the sky. This is how much forearm rotation is needed during the takeaway in the golf swing. 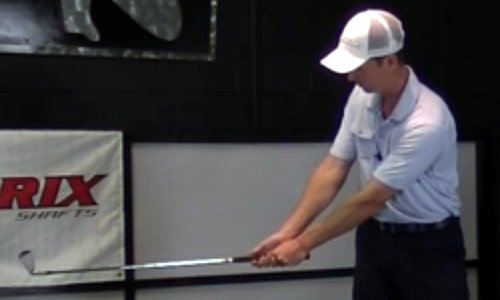 The right thumbnail points straight up

I will mention that this is a drill, the exact degrees of rotation of your thumbnail may not be perfectly vertical at the completion of the takeaway. The goal is to get the club face vertical, so if your thumbnail is a couple degrees in or out, it may not be absolutely perfect.

Another recommendation would be to try to work toward a neutral grip, and then realize for this drill the exact degrees of rotation of the thumbnail may not be perfect.

Get Your Free Membership to Watch "Forearm Rotation in Golf Swing for Power" Right Now!