Fundamentals of The Golf Swing | Based on Facts Not Assumptions

The fundamentals of the golf swing are based on anatomical absolutes

The objective of the Rotary Swing is to define a common set of fundamentals for the golf swing, just like we have in all other sports. The first step is to understand what a fundamental actually is; from there we can move on to determine the fundamentals of the golf swing.

Everything you've learned in life has been based on a set of fundamentals agreed upon by the members of whichever industry governs the subject in question.

When you learn how to play tennis, there are accepted grips or fundamentals of the tennis grip. There are fundamentals that govern how you serve, how you hit a forehand, a backhand, and so on.

Golf, however, has somehow managed to escape the idea that there's a fundamental way of doing things, and that's crazy. How are we going to help people improve and learn to play better if our sport isn't rooted in a common set of fundamentals that's agreed upon, that makes sense, that's based on anatomical absolutes?

That's exactly what we're here to discuss. The first thing we have to do is define a set of fundamentals.

What's a Fundamental and What's Not?

What are the fundamentals of the golf swing? In Rotary Swing clinics, we ask participants to share what they believe are fundamentals. A lot of people suggest the golf grip ("You have to grip the golf club, so the grip is a fundamental"), stance width, swing plane, balance, and weight distribution.

Let's look at some of those proposed fundamentals. Take the golf grip; there are many different acceptable ways to grip the golf club - interlock, ten finger, and so on. If more than one method is correct, then the golf grip itself is not a fundamental.

What about stance width in golf? Many participants in the clinics consider stance width to be a fundamental, but when we ask them what the correct width is, we get five different answers.

Let's see how Webster's Dictionary defines fundamental. According to Webster's, a fundamental is an original source. It's central. It's a basis determining a central structure or function. It's primary of, or relating to the foundation or base. It is serving as an essential component, a cardinal rule.

That's a little confusing. If we move on to the synonyms of fundamental, that will make it easier for us to understand the word. Fundamental is synonymous with:

Before we go back and talk about the grip, stance width, swing plane, balance and all those things, let's take a look at the antonyms as well. The antonyms, or opposites, of the word fundamental are:

What Aspects of the Golf Swing Meet the Definition?

Fundamental
...an original source; central; a basis determining essential structure or function; primary of or relating to the foundation or base, serving as an essential component; a "cardinal rule"

Now that we know the definition and synonyms of fundamental, let's talk about swing plane.

Golf swing plane is a much-discussed topic in the golf instruction world. Many golf instructors consider it to be the only thing that matters. Our question is, is swing plane, by definition, a fundamental of the golf swing?

Well, by definition we can discard swing plane immediately because it is not absolute, nor is it primary. Going back to the antonyms, swing plane is dependent. It is completely dependent on how you move your body.

By definition, swing plane is completely dependent. It's peripheral to what's going on around the body. The way the body moves dictates the swing plane, so swing plane is definitely not a fundamental of the golf swing.

Now, don't take that to mean that swing plane is not important. It is important but, because it's a byproduct of the movements of muscles and bones in the body, by definition it can't be a fundamental.

What is Absolute in the Golf Swing?

If swing plane can't be a fundamental because it's a byproduct of body movement, then what is absolute? What is fundamental?

What About the Grip?

As we mentioned earlier, there are lots of different accepted ways to grip the club. If we consider an interlock versus an overlap grip, one is not necessarily better than the other, at least not according to research that we have to date. That may eventually change, but at this point there's no fundamental that says you should grip the club this way or that way.

What About Stance Width?

Stance width in golf is a hotly debated topic. We talk about stance width quite a bit for the Rotary Swing, and as we get into future lessons we'll discuss it in detail.

You see some golfers using a very wide stance and others using a very narrow one. We'll be looking at the issue closely in the setup articles. We'll explain the fundamentals of the setup and exactly why the Rotary Swing stance width is what it is. As always, we'll begin by going back to the definition of a fundamental. 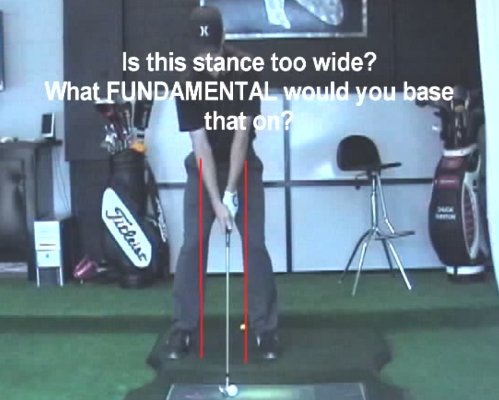 Is this stance too wide? Why, what fundamental of the golf swing would you base that on?

Whenever you see or learn about some aspect of the golf swing that someone describes as a fundamental, you should question it and think it through. "Is this a cardinal rule? Is it an original source? Is it the foundation of my golf swing?"

For example, the positions of the club are all peripheral things. The club depends entirely on how the body moves, so that's not the place to look for fundamentals of the golf swing.

There are fundamentals that are important to how the golf club moves and how it comes into impact, etc., but they are completely, 110 percent dependent on what your body does, what your muscles do.

That's where you need to start looking for the fundamentals of the golf swing.

Get Your Free Membership to Watch "TRUTHS of Instruction - Part 3" Right Now!