How Your Grip Affects Swing Plane

If you struggle with knowing where the ball is going after you hit it, you need to make sure you know how to grip the golf club properly first.

I’ve talked quite a bit about the golf grip on this website and in my golf instruction book The RotarySwing Tour Certification Manual.

In this video golf lesson, I’m going to talk about how your grip affects your swing plane and other positions of your club throughout the golf swing. 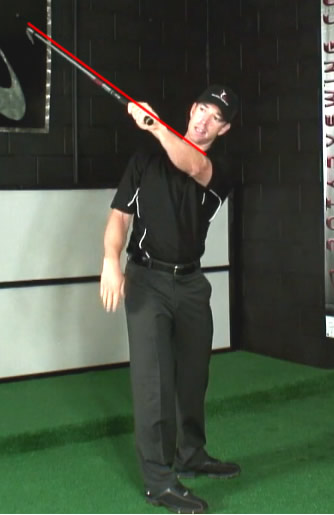 Your grip at setup directly impacts your club face position at the top of your backswing.

First off, the most important aspect of the grip is that it makes it easier to square the club face at impact. This is the most critical aspect of the golf swing, in general, and your grip is an integral component of this fundamental.

Once you start looking at your golf swing in terms of position and swing plane throughout, the grip also has a direct influence on this. That’s what I’m going to talk about here.

Most all golfers during our golf lessons get fixated on their position at the top of their backswing. That’s what people associate with what their golf swing “looks like” or what defines the “type” of golf swing they have.

They look at things such as where the club shaft is pointing in relation to the target, whether the left wrist should be bowed, cupped, etc.

A lot of things that happen during your golf swing influence your position at the top of the backswing, but in this golf instruction video, I’m going to talk about two things in particular.

The first is if you want a true, anatomically flat left wrist at the top of your backswing, with a square clubface (you can see I’m checking that here by holding my left arm parallel to the ground) you have to be careful in how you start bringing the club down in the downswing. 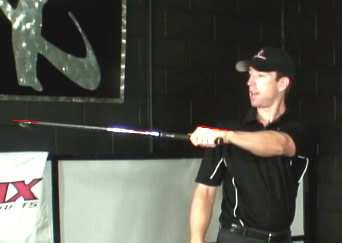 A simple way to check how your grip affects the club face at the top of your backswing.

The tendency from this position, where the club face and left forearm are parallel to each other, is for the clubface to come down and remain a little open.

To do this, I’m beginning to bow and rotate my left wrist as I come down. For the most part, this will happen naturally and that’s a good thing as this gradual rotation encourages a full release.

However, for most golfers, it takes a long time to master having what is a truly anatomically flat left wrist at the top of the backswing and learn how to square the face during the downswing.

Most golfers who don’t get to practice that frequently are better off by having a slightly stronger grip so that there is less rotation of the left arm required during the downswing.

Slightly Shut Face at the Top May Be Best for You

By taking this slightly stronger grip, the club face should actually be slightly shut at the top of the backswing unless you were to cup your wrist.

For this reason, it is perfectly ok to have a slightly closed club face at the top of your golf swing.

Having this slightly shut club face at the top makes it significantly easier for the average golfer to square the club face at impact, and having a slightly stronger grip makes this much easier.

There will be less dependence on timing, which means less time required to practice your golf swing. 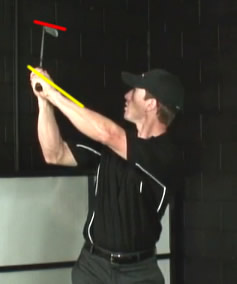 A simple way to check how your grip affects the club face at the top of your backswing.

The only downside of this slightly stronger grip is that it can be slightly more difficult to work the ball (i.e., hitting a fade or hitting a draw). But for most amateurs this is not a concern as the goal is to learn just to hit the golf ball straight.

Don’t feel that this is a limitation on your ability as a golfer. Most better players don’t work the ball much at all and have one predominant shot shape for all shots.

Now let’s talk about how this grip affects the swing plane.

Having a slightly stronger grip can and will steepen the swing plane slightly, as you can see me demonstrating here.

Having a swing plane that is very slightly steeper than, say, a parallel swing plane like what Tiger Woods worked on with Hank Haney is perfectly ok and even preferential.

You can see that this steeper plane is actually “on plane” as the butt of the club is pointing directly at the ball halfway back.

Having the weaker grip like Tiger used to have with Haney makes it much easier to swing the golf club along parallel planes, but that’s not necessarily desirable.

In fact, not a single player on the PGA Tour swings the way Haney advocates with his parallel planes swing theory as of 2012. Tiger was the only one and the last one.

Now that he has strengthened his grip under Sean Foley, his swing plane is steeper, as you can see me demonstrating here. 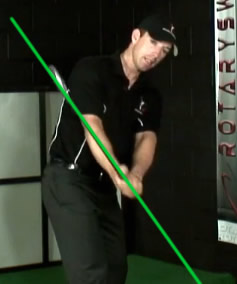 A simple way to check how your grip effects the club face at the top of your backswing.

Parallel planes look cool, but simply aren’t effective, as Tiger proved with his wild ball striking off the tee. Once Foley strengthened his grip, this steepened his plane, and his driving improved dramatically.

So, don’t be afraid to have a club face that is slightly shut at the top, like you see here, and you’ll have a much easier time getting rid of that slice!