Find Out How to Aim in Golf (or Pay the Price)

Tour Sticks will help you line up.

You're on the 18th hole, down by a stroke to your golfing nemesis.

Your ball's in the middle of the fairway, and you've left yourself with the perfect 9 iron distance.

There's water left of the green and a bunker to the right.

But you feel good, confident in how well your RST swing is holding up under pressure.

You set up and pull the trigger.

The swing feels great, you flush it at impact, and you hit the ball exactly where you aimed!

As you follow through, knowing you'll have a short putt to tie the match, you see...

How the heck did that happen?

You were lined up at the water and didn't even know it.

Don't let this happen to you.

Check out the video on how to aim in golf because too many players overlook this crucial aspect of the game.

(And if you need to grab some Tour Sticks to help with your alignment, you'll find them in our Training Aids store.)

Video Transcription: How to Aim in Golf

Today we're going to talk about alignment. It's a very simple subject, but one that can generate some confusion because of a few myths that are out there. 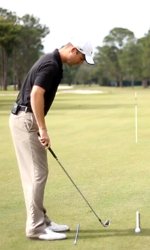 Rotary Swing Instructor Clay Ballard is set up to hit a straight shot in the photo at left. His target is just to the right of the bunker in the distance.

Since he's getting ready to hit a dead straight shot, he's going to line up parallel to the starting line. His feet, hips, and shoulders are all in the same alignment, all square to the target line.

It doesn't matter if he's hitting a shot 20 yards or 400 - his feet will always be about two feet inside the ball.

Technically, that means his feet should point about two feet to the left of the target in the distance, but most people can't judge two feet from a hundred yards away. Setting up parallel to the target line is close enough.

What About "Parallel Left?" 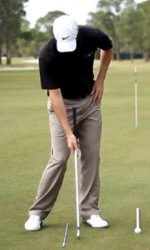 Things can get a little confusing when we start talking about parallel left.

The concept of parallel left comes from golf instruction a long time ago, when players were taught to line up with everything parallel, then flare the left toe open.

It's fine if you want to do this. Flaring the left foot opens up your hip socket a little bit. If you have limited mobility in your hips, that might actually be a good idea for you.

Go ahead and turn that foot open a little bit if you want to. As you can see in the photo, it will allow you to rotate your hips more easily while still keeping your shoulders square to the ball.

If you want to do that in your swing for whatever reason, that's just fine. 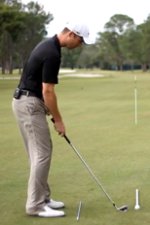 Let's just take a look at how that affects your alignment.

You can see in the photo at left that if you set up parallel - square to the target line - then flare your foot open, you will appear to be lined up to the left.

In fact, you're still lined up square, ready to take a straight shot.

This is what people mean by "parallel left." If you're going to use this technique, just make sure to line up your feet up square at first to make sure you're aligned correctly.

Once you're squared up you can go ahead and flare your foot open if you like.

What about shot shaping? How do you line up for a draw or a fade?

As it turns out, the rule of thumb couldn't be any simpler. Always align your feet, hips, and shoulders in the direction you want the ball to start. That's all there is to it. 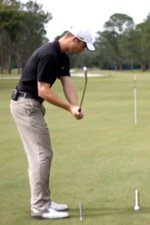 Suppose Clay is still aiming for the same target, straight down the line shown in this final photo, but this time he wants the ball to start to the left and fade back.

In this example he wants to hit a 10 yard fade, so he simply lines up his feet, hips, and shoulders 10 yards left of the eventual target. You can see that the reference line on the ground by his feet is now pointing off to the left.

He lines up to the reference rod, maybe swings a little bit to the left of that, and starts his ball out 10 yards left so it can fade back and reach the target.

If he wants to play a 30 yard fade instead, he will just line up 30 yards to the left of the original target line. Again, he swings a little inside-out, and lets the ball curve back.

Alignment really is that simple.

Get Your Free Membership to Watch "How to Align Your Body for Straight Golf Shots" Right Now!