How to Fade the Golf Ball

Hittting a fade for many golfers is the most desirable shot in golf.

Because the RST swing pattern is built around hitting perfectly straight shots, hitting a fade from the perfect RST positions is incredibly simple. 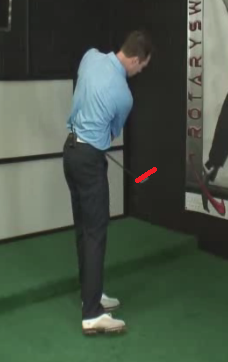 This is a critical checkpoint in a swing designed to fade the ball.

Once you've mastered the RST swing, you'll want to explore the capabilities of being able to shape shots. This gives you the ability to attack tough pins or safely work the ball away from trouble for a conservative tee shot.

Because the RST method is engineered around the simplest possible movements of the human body, the club is taking a very simple path away from and back to the ball.

This allows you to make very small and easy adjustments to hit the ball high, low, left or right.

In this video, the focus is on the simple adjustments needed to be made to the release to get the ball to curve left to right.

In case you are unfamiliar with the new ball flight laws, they can roughly be summed up by the following:

When hitting a fade, the primary concern should be your clubface angle through impact and how you release the club.

In the image above, you can see that the clubface is still open long into the follow through. This is the key to hitting a controlled fade.

If you feel that the toe of the club doesn't turn over through the hitting area by holding off the release with the hands, the ball will have cut spin and work itself left to right.

Note that hitting a typical fade will tend to add loft through impact compared to a normal stock shot, so that will typically lend itself to you needing to take 1-2 more clubs than normal for the given shot.

Video Transcription: How to Fade the Golf Ball 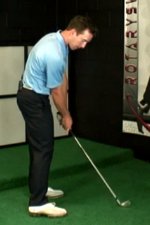 Coming from the inside

As I talked about in the "Draw the Ball" video, everything that you're doing is being dictated by what you do with your left hand in the swing, in terms of what the club face angle's going to do.

When it comes to fading the ball, it's incredibly simple. Again very, very slight adjustments in your swing that are going to make it so that you can get the ball to cut left-to-right without any problems whatsoever. That's the whole point of RST, is that the movements are so small and simple that you have the ability to manipulate, and the freedom to manipulate, the club face as you see fit.

Here's all you're going to do to learn to fade the ball. As I talked about in the "Draw the Ball" video, I move the ball back slightly if I want the ball to start out to the right and draw back to the left. It just depends on the type of shot that you need. 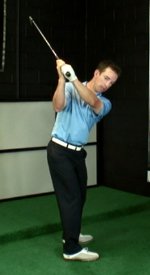 That's going to tend to let you hit a ball that's going to start to the right, versus if you just want to hook it around a tree really quick you might not move the ball position because you want it to start left of your target line.

As it's forward, it gives me the ability to come a little bit more over it and get the ball to start slightly left of my target line, or even on my line, and fade to the right. The big thing there is now just controlling the club face angle. You can move the ball slightly forward to give you a slightly in-to-out path, and now all we need to do is just worry about this logo on our left hand. 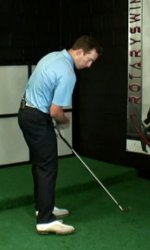 Now as I'm in that position, the club face is slightly open. As I come down, I'm basically just going to keep it there so at this position my wrist is no longer in that little arched position. It's slightly cupped - very, very slightly cupped - and now as the ball is forward, I'll probably get my shoulders just a hair open at impact, and that allows me to keep the club face from releasing. 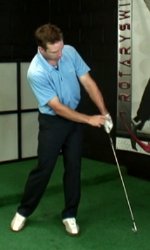 Hitting a fade, very, very simple. You're going to let it cup slightly at the top, move the ball slightly forward in your stance if you want the ball to start left of your target line or even on your line, and then as you're coming through impact keep the logo of your glove facing down the target line just a split second longer.

Hold off the release depending on how much you want to cut it, and you'll be able to get around those trees or anything else and fade the ball to right flags with no problem at all.

Just work on holding that angle just a little bit, getting a little bit more cupped at the top, and you'll be able to hit fades.

Get Your Free Membership to Watch "Hitting a Fade" Right Now!