In studying the basic movements of the Rotary Swing Tour golf swing, and why we do it the way we do, one part that's very easy to understand is the basic, overall movement of the golf swing.

The basic throwing motion remains the most efficient way anyone has ever come up with to use the human body to propel an object with speed, and we use the exact same motions and movements in the golf swing. 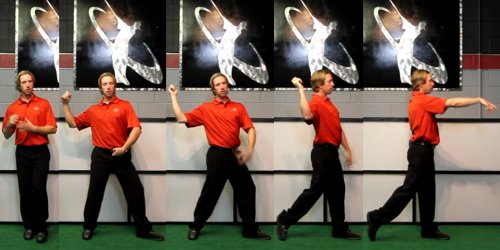 What makes up the throwing motion? A right handed person takes the following steps to throw an object:

Shoulder Blade Down & In

Notice that the arm externally rotates. You're moving your shoulder blade down and in as you go back to throw. Sound familiar? 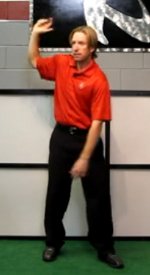 You can't throw very far with the shoulder up & out

Nobody throws a ball with the shoulder blade raised up and out - not very far anyway. Your natural athletic ability tells you to move the right shoulder blade back and down. As the body moves forward, the energy is transferred from the body up through the arm for release.

You may have been taught, somewhere along the line, that "The golf swing is 100% left arm."

It may feel like that to the instructors who teach that way, but if you could really get that much power by pulling with the left arm things would look very different in the Major Leagues because they'd be throwing baseballs that way! There's just no speed in it, or they'd be doing it too.

The left arm definitely has an important role to play in the golf swing. It creates the shape of the swing, and in a lot of ways it creates the plane and the path, working together with the right arm. It also controls the impact alignment, which helps control the club face.

All of these things are very important, but the left arm is mostly in a free-swinging orbit through the swing, while the right arm is providing the power and propulsion because it's more efficient at throwing, and the golf swing is a throwing motion.

When you swing a golf club you load up on the right, shift your weight, pivot your hips, and then fire your arm. It's the exact same concept, the same basic moves, that you use when throwing a ball. 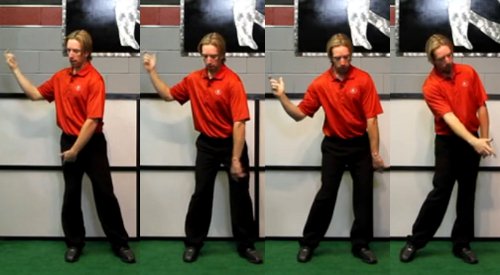 You sometimes see Tour pros stuff their shirt up into their armpits as a reminder to keep the arms connected to the chest. Let's think about that logically. 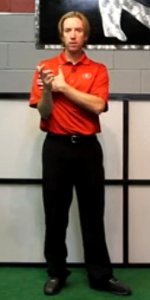 Connecting the arm to the body removes leverage

If you stuff your shirt up under your right arm and then try to throw something, how are you going to get any speed? You've taken the leverage out of the swing.

If you're focusing on keeping your bicep connected to your chest, you can no longer elevate your arms high enough to create leverage.

Imagine a karate chop. You're not going to break any boards if you're keeping your shoulder from elevating because you're trying to keep your bicep stuck to your chest.

The same is true of the right elbow and wrist. The right arm produces a great deal of leverage in the swing. When you take that out by keeping everything connected to your body, then it's forced to move at the same rate that your body is turning, removing all leverage.

Imagine you're a hunter-gatherer and that's how you've figured out how to throw a spear. How fast and how far is that spear going to fly if you're trying to hold something under your arm while you throw it?

The Fundamental Source of Speed

The basic motion of RST is the same set of movements that humans have been using to propel objects since we lived in caves.

The left arm works along with it, and you've got yourself a golf swing.

You may occasionally get confused and bogged down in details of the golf swing. You can end up missing the forest for the trees as you try to correct one thing after another in your swing.

When that happens, go back and review Reshaping Your Swing for Lag. This lesson goes over the swinging motion as a whole. It allows you to take a step back and look at the big picture again and work on the most basic elements of your golf swing, before you return to all the little details.

Again, RST is a logic, common sense, and science-based approach to the swing. The throwing motion is the core fundamental when it comes to building club head speed in the swing.