Prepare for Power: The Importance of Axis Tilt at Address

A crucial and common mistake at setup that dramatically impacts the top of the backswing position is not having the proper axis tilt at address.

While I did a video before on setting up with the proper axis tilt and how to determine that, many golfers still arrive at poor positions at the top by ignoring this simple setup key.

In this video, I show you what commonly happens at the top of the swing when you don't have the proper amount of tilt. 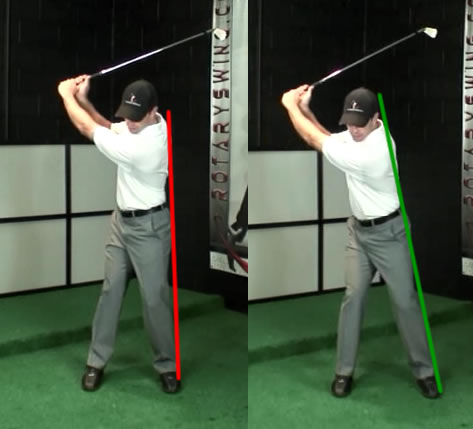 In the image above, you can see what happens to a golfer when they don't have the proper axis tilt at address on the left.

On the right side, you can see that you can almost draw a straight line up the left leg and back at a diagonal angle. That shows that the golfer had enough tilt at address (slightly exaggerated here to demonstrate the difference between the two). This is critical for two reasons:

Below, we can compare the look of Tiger Woods from around the year 2005 or so with Aaron Baddeley when he was with Stack and Tilt.

You can clearly see that Baddeley does not have any axis tilt at address; whereas, Tiger has about 6 to 8 degrees, which is the range I recommend for RST. 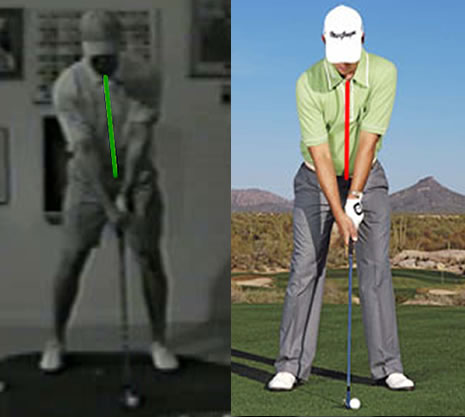 Though this doesn't seem like a big difference at address, as you get to the top of the swing you can see below what not having enough axis tilt tends to lead to.

Baddeley clearly is not in a very powerful or balanced looking position at the top. He looks unstable, as if you could tip him over.

Comparing that with Tiger, it's pretty easy to see how much more of a stable base Tiger has because his hips haven't slid further away from the target, and his upper spine hasn't moved toward the target as they have in Baddeley's case.

If you see yourself not loading up properly behind the ball at the top of the swing, check your axis tilt at setup first. 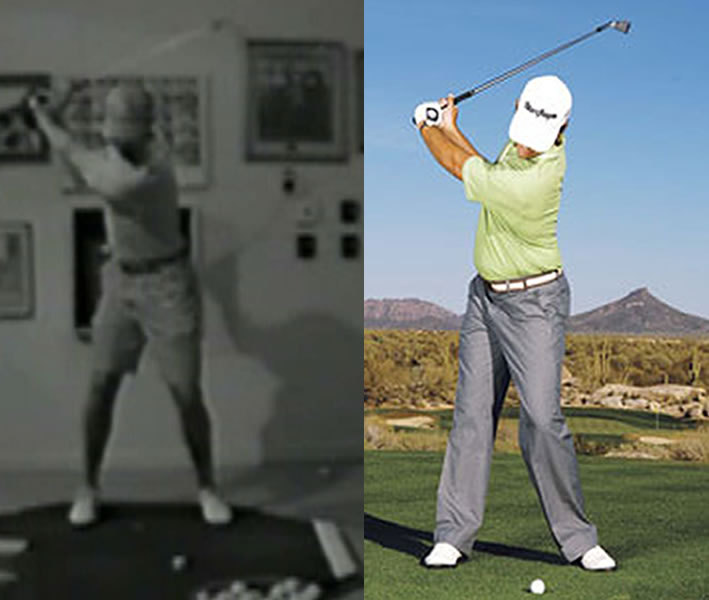 RST is based on nothing but pure logic, biomechanics, physics, anatomy - just raw science - so everything has a justification for why it is a fundamental of your swing pattern. One of the things that I think is overlooked is axis tilt at address. There's a reason why it's in there.

You need to pay close attention to it because a lot of golfers struggle with two very common problems that I'm going to show you, that are caused by not having enough axis tilt at address.

First of all, just to understand what axis tilt is, if you're not familiar; take your club, put it up at the sternum or the buttons on your shirt and run it through your belly button. As you set up, the more your spine is tilted away from the target, that's axis tilt.

Right now I have none. As I get into my setup posture I'm going to have a few degrees of axis tilt. Let's see what happens when you don't have any axis tilt, and you make a backswing.

I'm going to set up with my spine perfectly vertical. Now I'm going to try and rotate back, and here's what happens. The golfer is going to tend to fall back this way because as you're rotating back you're going to start twisting your spine. Because your spine didn't have any tilt away from the target, you're kinking it going this way.

With no axis tilt, the hips slide out

The other thing when you start doing this is that the right hip is going to start sliding out this way. These two go hand-in-hand; no axis tilt, slide-y hips, bad position at the top. Now, if I get myself with some axis tilt and I rotate back, now you can look at the top. I'm a lot more balanced, I have a little bit...

I don't want to have axis tilt this way - my spine leaning toward the target this way. As I go to the top, it looks like there's almost a straight line at an angle up the left side of my body. I have axis tilt at address, and now I'm going to take that out...I don't have axis tilt.

I'm either going to go this way with my hips or I'm going to stay on the left side and be in this bad position that's going to hurt my back.

Make sure that, as you set up, don't ignore getting a little bump and get that axis tilt so that you can get into a good, solid, powerful position at the top.

Get Your Free Membership to Watch "Importance of Axis Tilt at Setup" Right Now!