To Increase Distance in Golf, Get Max Speed from Your Arms

Do you feel like the harder you swing, the less distance you're getting? You're probably overusing your body and trying to rotate your body to get power instead of using the much faster right arm.

Pick up a stick or a shaft in your right hand and whip it into an impact bag. Notice how slowly your body moves and how fast you can get the stick going when you use your right arm for speed.

You were able to generate that speed by doing two things.

Read on to learn how to become the longest hitter in your foursome.

The best way to start to incorporate the right arm and use it to get some speed is by doing the Throw the Ball Drill.

If you haven't done the full Throw the Ball Drill, it's on the website. Review that first. We're not going to go through the entire drill in this lesson, so start with that and then come back here.

This lesson will just give a brief overview of the drill so we can discuss how it relates to what we're trying to accomplish with club head speed.

Go review the Throw the Ball Drill now, then come back. 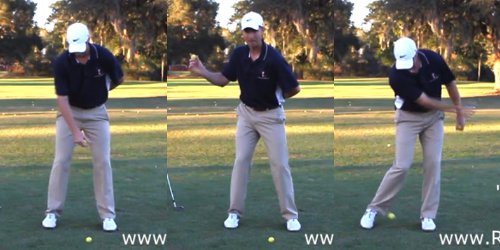 Get into address posture (left), turn with arm in front of torso (center), and throw (right)

Now Do It Yourself

Now get two golf balls. Set up to one ball just as you would at address. Hold the other in your right hand.

A common problem when people first try this drill is getting the right arm way back behind the head. A lot of people really try to load up and throw the ball as hard as they can at the ground, but that's not really what we're going for here.

We're trying to replicate an actual golf swing - not just throw a ball - so you need to make sure to keep the right arm in front of your torso as you turn back. Don't let that right arm and right elbow fly away from your body.

Once you've turned back, you're going to shift left so your weight is on your left ankle, then throw the golf ball down at the ground. You should get some nice speed into it if you're doing it correctly.

Let's take a closer look at that weight shift. As you shift to the left, make sure your weight goes to the center of your foot, right at the front of your ankle. 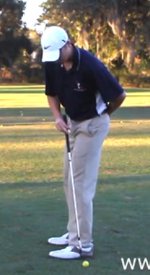 Shift your weight to the center of the left foot

If you let your weight shift to your toes as you're moving forward, you'll find that your hips will move forward toward the ball and you'll lose room to throw the ball or, in a golf swing, to swing the club.

That's called an early extension and we go over it in the Tush Line lesson. Review that lesson if you're getting your weight over your toes.

Don't roll to the outside of your ankle because that will shift your hip way too far forward, out of neutral joint alignment. And obviously you don't want to hang back on your right foot since the whole point is to shift your weight left.

Just shift to the left. You should feel as though you're really driving that left ankle down into the ground. Get some force into the ground, and then throw the ball.

From left to right: Weight on toes, too far left, to far right, correct

There are a few things to check as you're doing this drill: 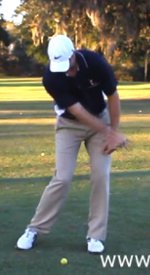 The chest is still facing the ball

That's the problem most people have - they tend to overuse the body. We want to limit the amount of action the body is getting, and maximize the right arm. See how you're doing by checking your chest position.

As you can see in the photo at right, Clay's chest is still facing the ball on the ground as he throws the one in his hand.

You should not be ripping your shoulders open as you come through. That will just drag your arm behind your body and keep you from maximizing your speed.

Another way people drag the club with the body instead of using the right arm is by letting the shoulders tilt. 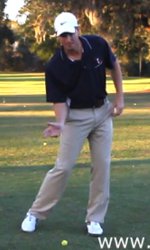 When the shoulders tilt, the right arm gets stuck behind the body. It stays bent and you just pull it along.

Clay is demonstrating the incorrect position in the photo at left. Don't let that be you!

You want to extend that right arm. This will keep your shoulders much more level. If you're having this problem, go back and review the Level Shoulders lesson for more details.

Really try to put some speed into these. You're trying to generate some power and club head speed, so feel free to throw the ball pretty hard as long as you're using the correct technique.

If you start to rip your shoulders open or rip the hips open, slow back down and get the technique right. Then you can speed up again.

Now that you've incorporated the right arm and started to get some more speed out of it, we're ready to talk about how to add some lag.

If you haven't gone over the 9 to 3 Lag Building lesson, that's where you need to start. The 9 to 3 lesson shows you exactly how to get lag by keeping your right wrist soft as you start your downswing instead of trying to hold on and tighten up.

First learn how to get lag, then you can come back here and learn how to incorporate it. The 9 to 3 lesson is step 1, and this is step 2, incorporating the right arm once we have some lag. 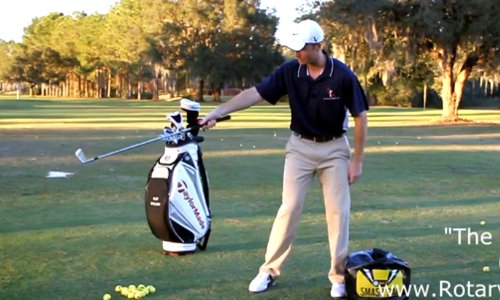 Now Put it All Together

Start out by setting up an impact bag and making some mini swings into it.

Work on feeling that you keep the right wrist extremely soft. The right forearm muscles stay soft as you throw your right arm down toward impact, letting the club lag behind. 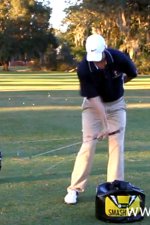 As Clay demonstrates in the photo above, throwing the wrist kills all your lag and it's really going to slow down your club head speed through impact because you're casting the club from the top.

That's what happens when you throw with your right wrist instead of your right arm.

If you throw your right arm down, keeping the right wrist very soft and relaxed, the club head will naturally lag behind.

The head of the club is much heavier than the shaft, so when you change direction with your arm and start pushing on the shaft, which is lighter, the head will naturally want to lag behind. It will only release when you push with the right wrist.

We'll start out with some right arm only drills. You're going to set up to an impact bag then swing the club back just a couple of feet. You want to feel like you're throwing the right arm toward the impact bag and letting the right wrist stay soft so the club head can lag behind. 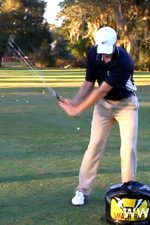 Go ahead and do 20-30 of these mini swings. Once you're comfortable with that you can move on to more of a 9 to 3 swing.

Take the club back, using the same checkpoints from the Lag Building lesson. You don't want to get a whole lot of wrist cock and build all your lag in the backswing.

Just stay nice and loose, very wide in the backswing. From there, you're going to shift left and throw the right arm. You should be able to generate a lot of lag and a lot of club head speed with this small drill.

As you get more and more comfortable you can start to make a few bigger swings, and just work your way up to a full swing.

Get Your Free Membership to Watch "Lag and Speed Drills" Right Now!