There's a terrible golf swing myth that may be destroying your backswing and, worse, your hope for improvement.

It's perpetuated by golf instructors who don't understand biomechanics and many golf fitness "gurus."

Myth: Lack of flexibility prevents you from making a full turn in your backswing.

In this article and video, I'm going to cover one faulty movement that almost always prevents a full turn in the backswing:

Misuse of the right arm.

If you don't use the right arm correctly in the golf backswing, you will inevitably look like the picture below at the top of the backswing: 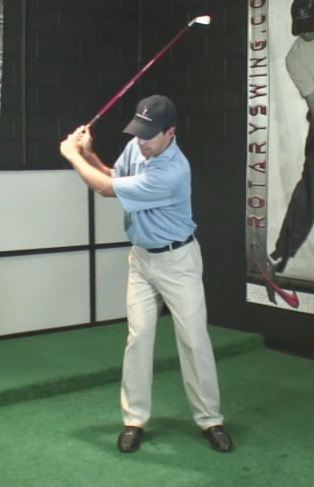 Do you have trouble making a full turn and look like this at the top of the backswing? There's a simple fix.

Ready to find out how the right arm is supposed to work and what you must feel in order to make a full turn?

Then read on and watch the video to enjoy all this:

Your Elbow "Pit" & A Backswing-Killing Movement

" I now believe this move is the most critical piece to success in the backswing (at least for me)...Almost instantly, the club was going back better on plane, my swing was much shorter and it resulted in more power not less. It also dramatically helped the sequence of the downswing and the release seemed very natural. I had much more control of the shot with a great penetrating ball flight that jumped off the club."
-Tom S. | Aug 12, 2012 | Atlanta, GA

As this happens, the muscles in the left shoulder girdle get stretched and feel loaded. When they near their maximum load, a signal is sent to the brain to release the tension.

As such, the golfer stops the turn since he feels fully loaded and powerful, and of course, there is no reason to turn any further.

To avoid this situation, I show you how the right arm must work during the backswing and give you drills to sequence this movement correctly.

However, what may help you most is one specific feeling I'll share with you in the video. It will feel totally different at first but give you amazing, visible results in a hurry!

"Great addition to the video library. This helped a lot to control my tendency to overswing. The swing thought...in the backswing was key. It's also helping me maintain the feeling of pulling from the right side to the top. Thanks for adding it."
-Tom S. | May 29, 2012 | 9 HDCP

Like everything else RST, you can begin mastering these drills in the comfort of your own home and without a golf club.

Learning this movement pattern will give you more power with less effort, and you can make great progress without ever hitting a ball by simply working in front of a mirror.

"Just doing this drill only, I went from 115ish club head speed to 125ish and have even broken into the 130's a few times. That is just with this drill!!! No downswing work AT ALL!!!! This is confirmed on several launch monitors and swing speed radars. Legit proof of this. Thanks Chuck!"
-KC T. | May 30, 2012 | Utah

Video Transcription: How Right Arm Works in the Golf Backswing 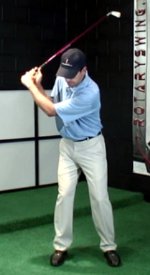 In another video I talked about how the right elbow pit needs to be out, away from you at address, and stay that way as you go back.

One of the key aspects of getting a full turn is this guy being in the right position at setup and during the backswing, but also another sensation that a lot of golfers don't have, and they lose, and it causes them to not make a full turn and they create a very narrow backswing.

A narrow backswing would look something like this. My arms are very close to my body. You can see I haven't made much of a turn and my right arm is very flat. I've got a lot of flexion here.

A lot of times the left arm breaks down, so I've got this really narrow, weak golf swing, rather than having a big, full turn and a lot of width, where this arm stays straight. That's what I want to talk about. 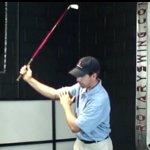 Right elbow in the backswing

Once you've got this right elbow in the right position during the swing, the most important feeling for most golfers - again, a lot of things I do on the website, I'm talking about a broad generalization here; not everybody's exactly the same, obviously - to most golfers, they have to feel that this right arm never folds, all the way to the top of the backswing, period.

What happens most times, when people don't make a full turn, is that this right arm starts folding early. They go back and this guy is already folded like this. Then by the time they're here, their arms and their shoulder girdle - especially this lead shoulder girdle - feels fully loaded up so they're not going to keep turning. 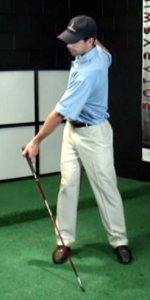 You can see my right shoulder on the right side of my head. When you look at a Tour player, you actually see their right shoulder blade on the other side of their head, when you're looking face on. That looks like this, where you can start to see my shoulder popping out behind my head on this side.

The only way that you're going to get there is for your right arm to stay straight as long as you can. When you're practicing this, just like everything else, you don't need a club at first.

The club's still moving a long ways. You'll see that my shoulder is really going to slow down, versus if I keep it straight my shoulder really has to keep moving in order for the club to turn. That's how you make a full turn. 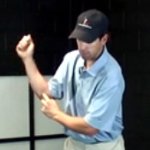 If I practice turn, turn, turn, turn, turn, you're going to see my right shoulder start to pop out over here. Now I have a little bit of flexion at the top. The less flexion I have, the easier it is to keep this left arm straight.

When people get all collapsed at the top and this left arm is broken down, it's almost always because this guy is bending too much, way too soon.

You really need to check this on video, because to keep your arm straight you're going to feel like you're at the top of the swing and your arms look like this. But they won't be. I've never had anybody not actually fold their right arm. But the feeling is that it doesn't fold during the entire swing.

It's just a sensation, but you have to do that. In order for your body to make this full rotation you have to keep that right arm straight. Of course, just like in the other video, it has to be in the right position but you need to make sure that it stays straight as long as humanly possible, and that will act as a piston. 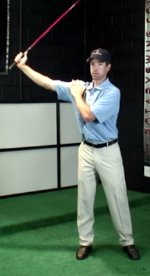 You want a lot of width

It will push that right shoulder blade back. You're going to get a nice, big, full turn, feel really loaded up, and more importantly that's going to help keep your arms in front of you and wide. You're going to feel like your hands, at the top of your swing, are as far away from you as you can get them because, again, you're not going to get this narrow swing.

We want a lot of width. That's going to help the club staying in front, and get us a lot of torque in our body because we're going to be forced to turn more to move the club. Keep that right arm straight as long as you can - it'll feel like you never fold it - and you'll be in a much better spot at the top.

Get Your Free Membership to Watch "Keep the Right Arm Straight to Turn" Right Now!