I've spent a lot of time lately preaching about the proper golf club release. Do you know why?

Learning how to properly release the golf club is the difference between a 300 yard drive down the middle with a slight draw and a 250 yard slice out of bounds right.

As you can tell, a correct golf club release is a major key in both producing club head speed AND squaring the club face through the hitting area.

This video is critical because it introduces a simple but very powerful drill that will teach the left hand how to properly release through impact by actually doing LESS with your right hand. 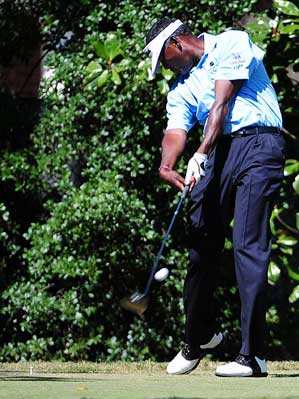 Vijay Singh gives you the perfect mental image for how to use the right hand.

It's crucial that the right hand work properly so as not to interfere with the left hand during the release. In fact, it is usually the right hand in the golf swing that causes nearly every major golf swing flaw, from swinging over the top to flipping and scooping at impact.

You can see above how Vijay's right hand is doing so little that it is barely holding the club at all!

If you've worked hard on the Throw the Ball Drill but still look like the image below when hitting shots, you're robbing yourself of distance and accuracy. 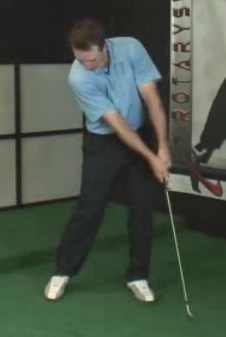 Holding too tightly with the right hand through impact is like making a weak check swing in baseball.

When you hold on too tightly and too long with the right hand in the golf swing, as you can see demonstrated above, you are impeding a natural release and destroying your speed at the most important moment: impact.

Instead, you want your right hand to feel just how Vijay's looks, relaxed and loose. If you continue to try and dominate the golf swing with your right hand, expect to struggle and lose speed.

The drill in this video will teach you when to actively use the right hand and when (and how) to quit using it, allowing the left hand to take control and properly release the golf club.

If you've always wanted to have that free, powerful release that Vijay, Mickelson and others demonstrate, you're going to love this video! It will free up your golf swing and teach you to effortlessly begin hitting a little draw, just by learning how to stop overpowering your swing with your right hand. 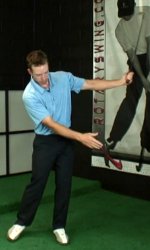 Let go with the right hand

The right arm's job is to supply and support the left hand by helping it control the club, but also to support it and supply it with speed. But in order to get speed, you've got to release it, and that's a very important concept to understand in the swing.

The reality is that your right hand through impact is done. In fact, I actually feel like I'm just barely holding onto the club with the right hand at all, as a subjective reference for you. I want my golfers to feel the same, that they're releasing that right hand. 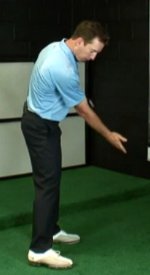 Down the line view

If you just try to do the Throw the Ball Drill and hold onto it, obviously the ball is never going to release. You're never going to get any speed out of the ball. It defeats the purpose of the drill.

Speed is limited with both hands on the club

If we look down the line, what you want to see, as you're coming down, my right is coming off. You can use it to supply speed, but then let go of it so that the club can release and your body doesn't have to keep turning.

You can see if I keep my right hand on the club can't move as fast unless I physically try and throw it with my right hand. I need to throw it early and release it. Now as I let go of it, the club can zip through impact with no problem.

If you look at some great ball strikers on the Tour - Vijay Singh and Phil Mickelson are two great examples - both of them, their trailing hands especially with the driver basically comes off the golf club. Vijay especially would come through, and his hands are basically like this on the club. His right hand's barely touching the club, and Phil's is no different.

They're doing the same thing in the real world, where they're letting that right hand come off to keep from impeding the release of the golf club. That's what you want to feel.

You don't need to hold onto it all tight with your right hand. That's going to just mess up a million things in the swings and keep you turning your body through. It's going to get you moving too hard with the right. It's going to slow the club down. 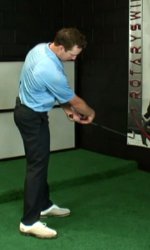 You want a fast, "zip" release, not a hard, controlled release with that right hand. Let the right hand come off when you're hitting balls if you struggle to get a proper, snappy release at the bottom, and you'll be able to get a lot more speed with a lot less effort.

Just hit balls, little half shots just like always. Let the right hand come off. You can see as I go through, I'm putting no effort into this at all, and the club has got a ton of speed. If I did the same thing, now my body's got to stay with the club. It's got to rotate really hard if I'm holding onto it really tight.

Practice releasing it, then as you go into your real swing and start keeping your right hand back on, start practicing where it's just kind of along for the ride through impact, and let the club pull you up. Your hands should finish very soft and you should have a lot more speed with a lot less effort.