Flip vs. Release in Golf

Flip vs. Release in Golf

What is the difference between a proper golf club release and a flip in the golf swing? To learn the perfect golf swing release, step by step, watch this video. 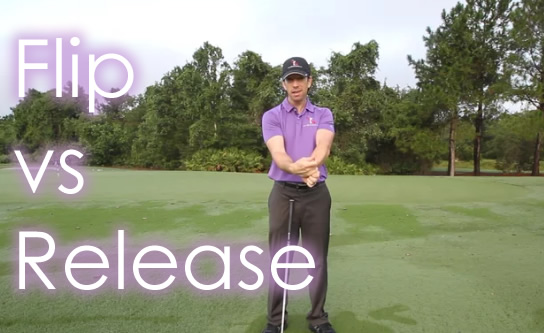 Many golfers are very confused by the concept of whether they flip the golf club or release the club properly.  Ideally you want to release the golf club properly obviously, but if you don't know how that is done, then you will struggle with the flip your whole life.  So let's first look at what a golf club flip really is.  First of all, it causes you to add loft to the club at impact dynamically and this causes the ball to fly a shorter distance, fly higher, and have more spin.  When you have a proper golf impact position combined with a proper release, the ball tends to fly on a much more penetrating trajectory which leads to more consistency and allows the golf ball to bore through the wind and hold its line easier.

Because the vast majority of golfers are flippers or those who have their left wrist breakdown at impact, most golfers struggle with consistent iron play and solid ballstriking.  The reason for this goes back to my many videos on the physics of the golf swing and the pushing versus pulling. If you are pushing from the right side of your body, specifically the right hand, the left wrist will always break down into a cupped position.  And this is what we refer to as a flip.

This is an amateur flip because there's also a "pro flip" of the golf club.  And that is when somebody tries to square the club face up aggressively using their hands and wrists to rotate the club face closed during the hitting area.  This also is often actually caused by a push from the right side but from a different part of the body.  It's caused when you push too hard from the right leg which causes the golf club to drop under the swing plane and get stuck. If the golfer doesn't flip their hands over quickly through the hitting area in a futile effort to square the club face the ball will tend to be a big block out to the right or heaven for bid if the club face is open a block slides or a "blice" as I like to call it.  So, the golfer tries to flip the club face aggressively over with the right-hand to get the club face closed and this leads to quick snap hook.

In order to square the club face consistently, you must allow the club face to release naturally and that is the key.  Even Ben Hogan, who was a very right side dominant golfer, came to the conclusion that there's no way that you should be trying to consciously and actively square the club face through the hitting area.  He decided this was a devilish thing to control and he was right.

With the Rotary Golf Swing, we allow the club to release naturally in what we term a passive release.  What this means is your hands and arms are going to rotate over naturally following the lead of the rotation of the toe of the golf club.  This is due to physics because the golf club is being swung on an inclined plane and the clubshaft is in the heel of the golf club, making the toe naturally want to rotate over.  If you start swing a golf club back-and-forth nice and easy with very soft wrists and hands you'll start to feel how this naturally wants to occur.  The softer you keep your hands, the more the to the club face wants to rotate over naturally.

However, most golfers tended death grip the golf club and hold onto it way too tightly in a futile effort to feel like they have more control over the club face through the hitting area.  This actually leads to less control of the golf club, believe it or not.  This goes back to that old adage of give up control to gain control.  As you become more relaxed and rely less on your arms and shoulders to control the club face and start letting physics and Sir Isaac Newton swing the club for you, you'll find that the golf club will start to release and rotate very effortlessly and your arms will naturally rotate over as they follow the release of the golf club.

Note that I said, the wrists rotate over, and that is the key.  When you're pushing from the right-hand instead of rotating your forearm bones, your scooping the golf ball at impact, and this leads to that week high ball flight I spoke about earlier.  Instead your left wrist is going to stay stay flat and is going to rotate over in a counterclockwise motion, following the toe of the golf club.  Again, this is not something that you actively try and do as you keep your arms soft this will tend to naturally want to happen.

At first, if you're used to scooping it you're going to need to take time to train your hands to rotate over through the hitting area, because you've been doing the opposite for so long.  So you'll want to follow my 5 Minutes to the Perfect Golf Club Release video that will walk you through this sequence step-by-step in five easy steps and teach you how to rotate and release the golf club just like every tour pro on the planet.

Once you follow that five minutes to the perfect golf club release video releasing the golf club will become second nature to you and a very natural and effortless motion and you'll have the side benefit of learning how to get into a nice flat left wrist impact position.


JOIN OUR 396,041 MEMBERS AND GET INSTANT FREE ACCESS TO DOZENS OF VIDEOS!

Get Your Free Membership to Finish Watching "Flip vs. Release in Golf" Right Now!

Get Your Free Membership to Finish Watching "Flip vs. Release in Golf" Right Now!