Stop Losing Your Tush Line in Your Swing

One of the most common questions I get is how to stop losing the tush line, or stop standing up and losing the spine angle through impact.

This common fault in most better players is due to spinning the hips aggressively in the downswing in a futile effort to generate clubhead speed. This inefficient motion doesn't add as much speed as most would think and just leads to a clubhead that is approaching the ball too far from the inside and typically casted, causing the golfer to lose significant lag.

To combat this, the drills in this video show you how to make a proper move in the downswing to get the club coming down on the proper plane and path.

If you have a RotaryConnect, you'll want to have it handy to begin practicing your new, powerful downswing motion while watching the video. The RotaryConnect really helps train you how to use your hips for stability and what it feels like to properly perform the "Tiger Squat" move. 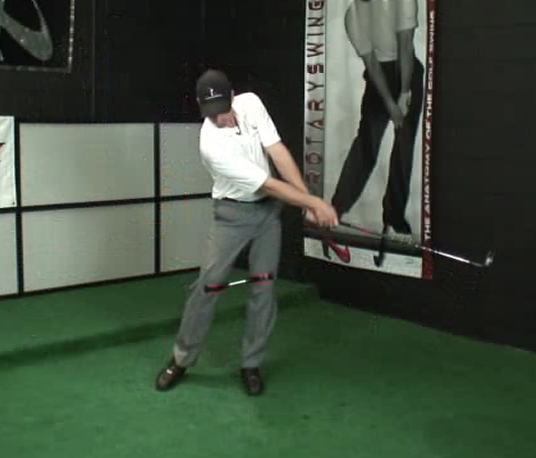 The RotaryConnect makes it simple to feel the proper movement of the lower body in the downswing and helps teach you how to fully release the club through impact.

If you've struggled with losing the tush line and spine angle in the downswing, as well as lag, read on...

In this video, I discuss the proper feeling and look of the "Tiger Squat" move that I discussed in the "Tiger Squat Move" video. This squat move is critical to slow the rotation of the hips and to activate the glutes to use the ground for leverage.

But, as you'll see in this video, it is also the same motion that allows you to maintain or even move behind the tush line for the first time ever in your golf swing! This critical move helps you sequence the downswing properly so the arms come down on plane.

In higher handicap players, the tendency is to come over the top in the downswing by aggressively unwinding the upper body rather than just the hips. This video will help you golfers who want to get rid of that dreaded over the top move learn what it feels like to allow the arms to drop to the inside on the downswing, or the proverbial "slot".

In the screen capture above, I am employing the muscular contraction I discuss in the video and using the RotaryConnect to help engrain this feeling (learn more about the RotaryConnect here). A RotaryConnect is not necessary, but it does make it easer to get the proper feeling of squatting and stabalizing rather than spinning the hips.

Note in the screen capture below, you can see how my head drops during the transition and early stages of the downswing, and this increases the knee flex and spine angle. This is the exact opposite of losing the tush line, in fact my rear is actually further behind the line than where it was at the top of the swing. This move has allowed me to maintain my angles while providing time for my arms to "fall" back in front of my chest. 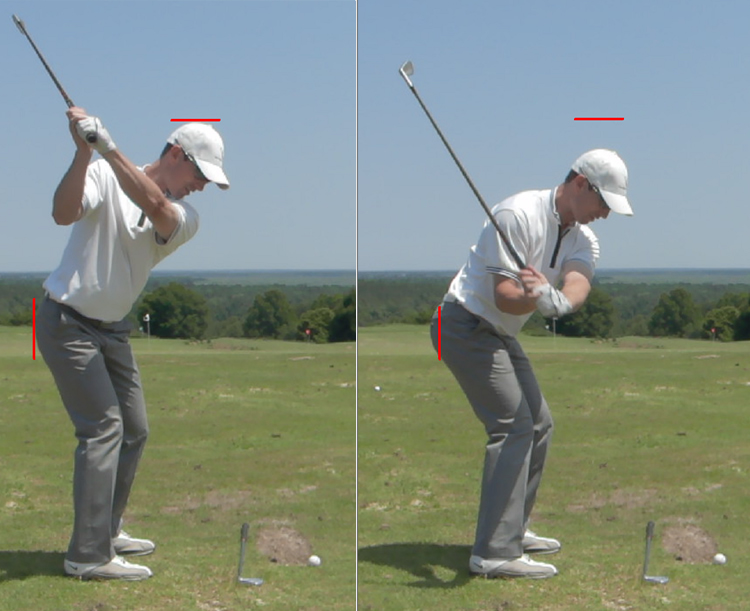 As I move into impact, you can see that my angles are nearly exactly what they were at address, and my tush line is exactly where it started. Doing this has allowed my arms to catch back up in front of my chest, allowing my shoulders to be square at impact for control. 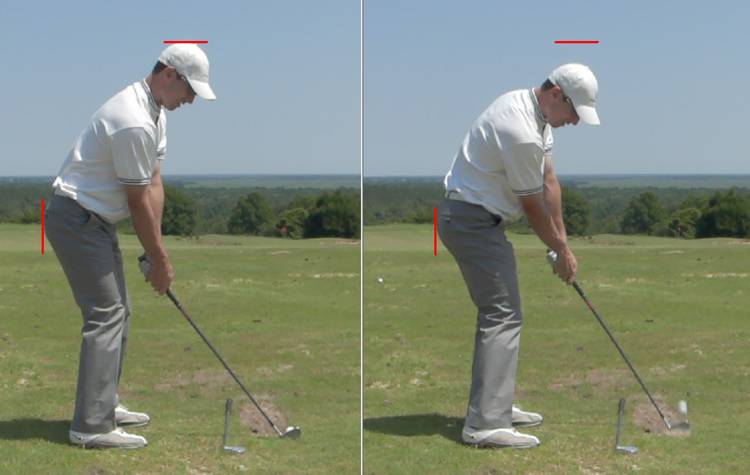 Because I have done things right to this point, the club is allowed to release with great speed past the body while my lower body continues to provide stability for the release of the club. You'll note that during the release I have begun to move away from the tush line. It is at this point that your body will begin to straighten up and the angles no longer need to be retained.

Now let's watch the video and add this powerful move into your golf swing! 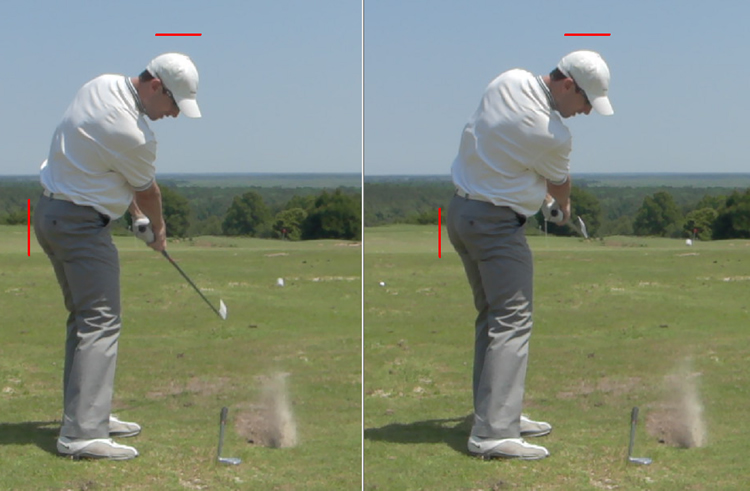 It takes practice to change it, just like everything else does, but it's very simple to understand what causes it. For 99 percent of the golfers out there, it involves spinning their hips. Let's look at what that looks like when I do it incorrectly and we lose that tush line.

First of all, let's understand what the tush line is. If you imagine just dropping a straight line - as you can see in the background, the black piece of wood here is representing a line drawn straight down from my hip or the back of my rear - as I go into my downswing, a lot of golfers move away from it because they push off that right side.

That pushes the hip under, and toward the target line. Notice now my hip, instead of being back here, is this way, and I stand up and I lose my spine angle. It tends to leave me coming too far from the inside; it's also very hard on the back. 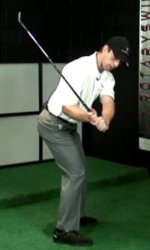 How do we fix this? The key is to do the exact opposite. Instead of rotating, which tries to get your body to create this straight line condition - that's why you lose all your angles and stand up out of it; because your body, when you start twisting it like this, tries to straighten up and can't maintain those angles - what you need to feel is a squat move. 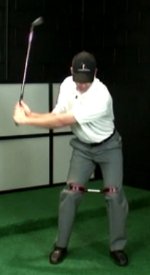 A simple fix for this, use a RotaryConnect. Simply place it above your knees. Now, when you're working on this, what you want to feel is that as you squat down you don't try and move your right knee or right foot off the ground, or move your right knee in, because it's going to feel very awkward with this on. Now you have a really stable base to release the golf club and not be spinning your hips.

That's what this device is really helpful for, for the lower body. As we go to the top we're going to squat down, release the club, and now you can tell that I haven't spun my hips because my right knee isn't moving in closer to my left. My right foot's still down on the ground, the inside of my right foot. 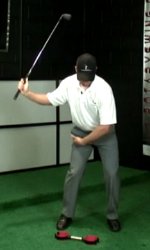 Practice squatting into the left side

The simplest way to do that is to go to the top of the swing and just practice squatting into both feet, squatting into that left side, and then start bringing the club down. Stop at impact and check your alignments.

You should find that if you're spinning you'll still lose your spine angle, but if you squat and then maintain and try to get into these impact alignments, you'll maintain that tush line throughout the entire golf swing until you get into the follow through.

Get Your Free Membership to Watch "Losing the Tush Line" Right Now!