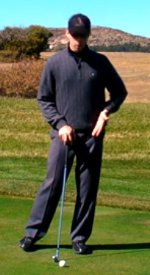 In some ways Move 4 is just a reaction to everything else that's already happened, but there are still some critical checkpoints for you to look at.

These checkpoints will help you understand what you're trying to do in your golf swing and allow you to create better shots, get into a better impact position, etc.

The most important thing in Move 4 is to make sure you're pivoting on the left hip.

A lot of golfers end up with lower back, hip, and knee injuries because they come down into impact - which is part of Move 3 - without getting the left hip into neutral joint alignment.

They either push off the right foot and slide or they don't shift enough during the downswing to get all the way back, so they end up a little bit short of neutral.

See the photo below for an example of not getting into neutral.

The hip is inside the left ankle

Being outside of neutral joint alignment creates strain on your joints and can lead to injury, so you want to make sure to move all the way into neutral. You need to know exactly what that looks like, which many golfers don't.

Let's say you're looking at your swing on video or working with a local instructor to help guide you through these lessons. You want to check that your left hip is directly over your left ankle joint.

Bear in mind, though, that your hips are rotating back behind you in the swing. That means that if you're looking from face on, the hip should actually appear to be slightly outside of neutral for a typical iron shot.

This is because, if you're looking from face-on, the hips are not facing you anymore. They have turned about 45 degrees away from the face-on view and should appear neutral from the direction they are now facing.

Why Does It Matter? 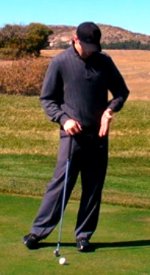 Being in neutral is critical because as your hip gets into neutral it becomes very easy for it to pivot, pain free.

If you've had a lot of hip and back problems while playing golf, it almost certainly has to do with your hip not getting into neutral joint alignment. Your body is not designed to pivot well when you're out of alignment. It puts your joints in an awkward position.

Check yourself as you're coming into the follow through. Look at the completion of Move 3 into impact; your hips are at 45 and you're in neutral with all your weight is over your left ankle, not on the balls of your feet.

When you put weight on the ball of your foot, your knee becomes the primary balancing joint. During the golf swing, you're in the middle of a big rotation - and the knee is designed to hinge, not pivot. Get the weight over your ankle so you can rotate at the hip, using your body the way it's designed to work. 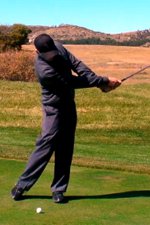 Hip still in neutral at release

You want to make sure when you come into impact that you're all the way onto the left hip, with your weight over the left ankle. As you release the club, your hip stays in that neutral position, not moving way out past it or stopping short of it.

If you're trying to get that feeling of really covering the ball with your body, this is a big part of where that comes from. The only other way to do it is an incorrect way - if your hip was short of neutral you'd have to smother it with your body, which would create all kinds of bad shots.

When you want to really start compressing the ball make sure to get your weight all the way onto that left hip, then let the club release. You'll be able to pivot on the hip just fine, and it should be pain free unless you've had some kind of significant injury. 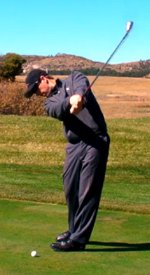 The second checkpoint - once you're sure you're in neutral joint alignment in the follow through and you've let the club release - is learning to maintain your spine angle.

The only way to maintain your spine angle is by continuing the pulling motion that you started in the downswing.

You can check this from either up the line or down the line. If you come down into impact pushing off the right foot, your hips move in and you end up standing up out of the shot into the follow through.

Instead, shift into neutral, pull with the left hip, and let the club release to maintain spine angle.

Hands should be in front of the chest (left), not way out to one side (center & right)

If your hands are way out to the left or right, it means that something happened with your arms in the swing that's causing them to move out of sync with your body. Make sure that your hands stay right in front of your chest as you move through the swing.

Master these three checkpoints in Move 4 and you'll have a masterful follow through.

Get Your Free Membership to Watch "Golf Swing Follow Through " Right Now!