You probably don't consider a necktie to be standard golf gear, but it happens to be a great training aid if you struggle with reverse pivot and the transition in the golf swing and getting into bad positions at the top.

Don't rotate everything back as a unit. Over rotation will lead to a reverse pivot at the top of the backswing.

The necktie is a handy diagnostic tool that can tell you a lot about your position at the top of the swing. If you get a video camera and film yourself hitting a few balls while wearing a necktie, you can get a very clear picture of what's going on in your swing.

When you lose the separation between the rotation of your shoulders, upper torso, rib cage and hips, and just start moving them all back together, it's very hard to sequence a dynamic and powerful golf downswing.

Everything has to move in the right sequence in the golf transition. The hips have to move first.

When you just pull everything back as a unit, you get your muscles bound up so everything wants to go at once. The shoulders fire, the arms fire, and everything's going on at once. Without the proper sequence, it takes a lot of effort to generate enough power.

Go to the Top and Check the Tie 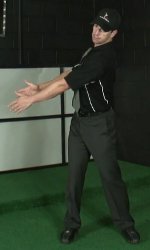 The reverse pivot, the necktie drapes over the chest.

With a necktie on, you can rotate back and check your position at the top of the golf swing to see whether or not you're in a good spot.

The drill is very simple. Put on a necktie, rotate back, and pause to check the position of the tie.

If you go back incorrectly, as shown in the photo at right, your spine leans toward the target, your head is tilted back, your hips and everything have been pulled along with your body and rotated too far.

What's Wrong With That?

You can imagine that it's pretty difficult to get a dynamic transition from this position. It just doesn't work that way; that's not how your body is designed to move.

Imagine getting into the position pictured above and then trying to throw a baseball. It doesn't make any sense. If you were a pitcher loading back to throw, you wouldn't lean your upper body or your head toward the catcher. You would lean away from the target.

Now Do it Right 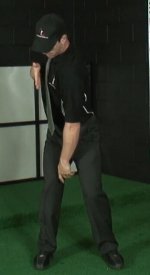 When you load your right side properly, the necktie hangs freely.

Look at the difference in the photo at right. As you can see, the necktie can swing freely. Now, as you turn back your spine leans away from the target and you can sequence the downswing, just as a pitcher would when throwing a baseball.

Even if you're not actually wearing a necktie, it's a great idea to imagine that you are as you go all the way to the top. Picture a necktie hanging right over the inside of your right knee as a reminder not to lean toward the target.

If you find yourself getting into a reverse pivot at the top, if you can't get the downswing right and have trouble sequencing the transition, this is why. Get a necktie, film yourself hitting some balls, and pay attention to your form at the top of the golf swing.

The incorrect position, at left in the photo below, is not a very athletic place to move from, versus the correct position at right, where you're loaded up and have the stability of the right glute.

That's why it's so important to be in a good position at the top, and that's why we work on the golf swing the way we do. The downswing has to be done in sequence, and you need to be able to move from a stable foundation. 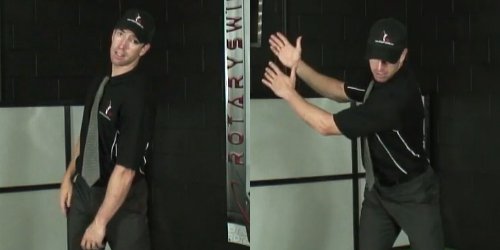 Leaning away from the target (right) is a much more powerful, athletic position than a reverse pivot (left)

Give it a Try

If you're struggling with a reverse pivot at the top or your golf swing at transition, grab a video camera, throw on a necktie and start making some practice swings. Then just review the shots to see if your pelvis is moving out, away from the target so the tie drapes over your belly, or if you're in a good position that allows it to hang straight down.

If you discover you're in a bad position and you correct it, your swing will feel completely different. You'll feel much more powerful when you're loaded up with your spine leaning slightly away from the target. In addition, you'll be taking unnecessary strain off your back and your hip.

Take a necktie, throw it on, make sure it's hanging down away from you at the top, and see if that doesn't help you with your sequencing in the downswing.