How the Elbow Pit Can Fix Your Flying Right Elbow

Do you struggle, like most golfers, with a flying right elbow at the top of the backswing in golf?

From this position, you have to make some aggressive moves with the arms to get the elbow back in front of the body at impact or make other compensations.

Your golf swing doesn't need to be that complicated.

Learning how to set up correctly with the trailing arm elbow in the right position at address and how it must rotate properly going back will teach you how to avoid a takeaway that is too flat, too inside and around, and too deep at the top of the swing.

"This was a massive game changer in my backswing position and contact consistency - THANK YOU!!!! Clay, I finally got my right arm in proper position because of this!"
-John B. | Dec 17, 2012 | 4 HDCP 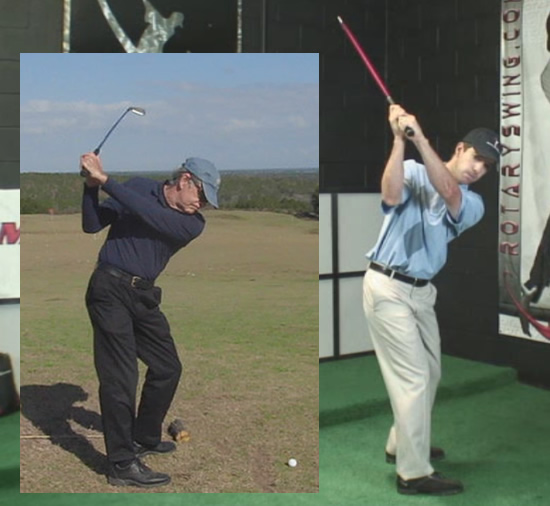 The golfer on the left demonstrates a typical backswing that puts you in a tough position to make consistent impact. With this video, you'll learn to get into the position on the right every time.

You might be surprised to know that the reason most golfers get their arms deep behind them during the backswing is actually because of their posture at address.

When you don't understand the position the shoulder blades need to be in at address, the right arm will internally rotate, putting the elbow in a position where it can only go deep as it hinges in only one plane.

When you put the shoulder blades back in neutral, the elbow pit will naturally rotate to face away from the golfer.

This is the exact position it needs to be in during the backswing to allow the right arm to simply hinge to move the lower arm upward while staying in front of the body.

In this video I show you how most golfers set up to the ball with the shoulder blades in a protracted position, and how simply retracting them puts you in position to make a very simple backswing and achieve perfect positions at the top.

The most common swing fault that I see on the takeaway, and during the entire backswing deals with the right elbow, is something that most golfers have seen on the website, but they don't stick with it enough or pay close enough attention to it. 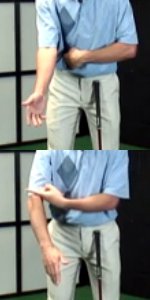 Right elbow pointing toward the body, and away

That being said, what most people do at setup in golf is, this pit of the right elbow - this crease in your elbow - is typically internally rotated. That's just rotated, from your perspective if you're a right-handed golfer counter-clockwise.

What happens is, that puts the right elbow itself pointing away from you, away from the target line, out away. This would be my elbow pointing back at my body, this would be pointing 90 degrees to my body.

Because your elbow, the way it's designed, only bends in one plane, when you go back if your elbow is already pointed back here - I'll do it from down the line - this is pointed at me. This is externally rotated, where it would be in neutral, and this is internally rotated. 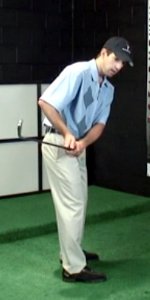 The right arm gets stuck behind

As I start my golf swing, my elbow can only bend in this direction, so of course immediately, as soon as I start doing that, my arm starts getting stuck back behind me. Now all of a sudden I've got all these things that we're working to get out of our golf swing - the club is deep and flat by the time I get to the top - my right elbow is way back behind me and now I'm stuck coming down in the downswing, and all the big problems that we see all the time.

It all starts from address. If your arm is internally rotated so that the elbow is bent so it can only bend in this plane, it has no choice but to go behind you in the backswing.

One of the things that I discuss a lot in the clinic as a central theme is that your right arm is the governor of width. It is the dictator of width, and if it is allowed to bend like this, it's going to get really narrow. You're going to have a very narrow golf swing. That means you're going to get the club deep and stuck.

What you've got to do is have your right elbow in neutral at golf setup, so if you're standing in neutral with good posture, your elbow pit is going to point out, away from you. Now, as you bring yourself into address it'll rotate a little bit, but it's really important to try and keep it out, away from you.

The right elbow points down the target line in the backswing

When you go back, you want to always keep it pointing away from your body. Halfway back, it's going to be pointing at the sky. Let's take a look at that. As I go back, my elbow pit is now away from me. As I start rotating back, now notice that my elbow is now pointing more down the target line.

Most golfers I see, it's pointed like this. It's pointing perpendicular to the target line, instead of down the target line in the backswing. The reason that I want to do this is, again, I don't want it bending back here behind me.

As I rotate back, my arm is now still in front of my body and as I keep turning, now because it's in a position where it can bend up, the club comes up on plane, rather than going behind me, and then I've got to do something crazy to try and get it up.

Rotate back; it's pointed out, away from me halfway back. As I keep turning, now it just bends right up. This elbow controls all of that. If you're starting out like this, the club is going to easily go back this way. Your right arm is going to fold too early, and now we're really deep in the backswing because of the right elbow position.

Keep the right arm straight as long as possible

You want to keep that right arm straight and externally rotate it as long as humanly possible. Then, as I keep going from there, it just bends up.

That is a critical piece that I think is extremely overlooked for a lot of people. They have really bad posture at setup, their shoulder blades are protracted, so their arms naturally want to internally rotate, and now we've got all of these issues where the arms are moving all over the place and we're disconnected from our core.

Pay very, very close attention to what that elbow is doing at setup. Make sure it's pointing out, away from you. Then as you keep going it'll rotate a little bit more. Remember we know there's a little bit of external rotation in this upper arm, your humerus bone.

That sets the club on plane, but if you just focus on keeping the elbow out, away from you, then as you go halfway back, make sure it's pointing more down the target line and straight up at the sky, rather than down at the ground or perpendicular to your target line.

That will allow your arm to be swinging up, rather than behind you, and make your swing dramatically simpler. Just focus on address, keep it there going back, and your club will come up on plane a lot easier.