Rotation in Golf | Master Rotation With the Shoulder Blade Glide

One of the key components to rotation in golf and the Rotary Swing is that you rotate while staying centered around your spine.

The primary way we've talked about doing that is using the right shoulder blade glide (for right-handed golfers) to move the shoulder blade down and in toward the spine.

A lot of people have misunderstood this move, so we're going to explain exactly what's happening and why we do what we do. 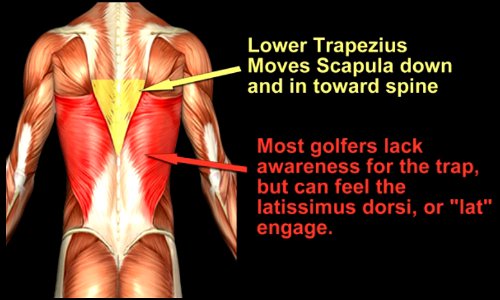 Most golfers are not aware of the traps, but can feel their lats engage

Let's look at the muscles that provide rotation around your spine in the golf swing. Your shoulder blades sit on either side of your spine and have full mobility; they can move up, away from the spine, in, and down.

We obviously want to stay centered around the spine as we rotate in golf. The spine serves as a fixed axis.

The Rotary Swing is designed to take out all the moving parts and stay centered around that axis so we can make clean contact every time.

What Does It Do? 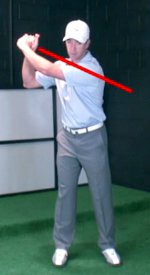 Gliding your right shoulder blade in toward your spine does a couple of things.

One, it serves as the initial movement - the origin of movement - for rotating and pulling in toward your spine.

As you can see in the photo, gliding your shoulder blade in toward your spine doesn't affect the head at all.

Moving the shoulder blade creates rotational movement around your spine, which kicks off the motion for the golf swing.

The shoulder blade glide is not the only movement in the takeaway. Your obliques are also working.

These sets of muscles are designed to rotate your torso in the golf swing, but we still need something to keep us centered.

A lot of golfers really move from their left side during the takeaway. They push everything across their body from the left, so when they get to the top of their swing they haven't made a full shoulder turn.

They can't, because they're just moving from the left side. 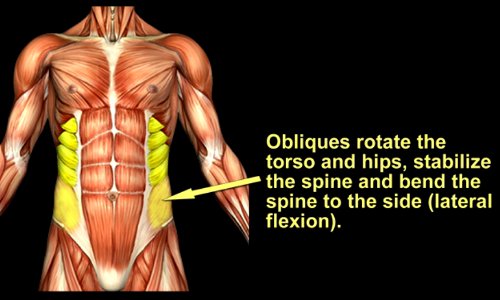 If you pull from the right side instead of pushing from the left, it's very easy to make a full shoulder turn in golf.

The shoulder blade glide is the initial movement for rotation in golf. It's the first piece, that triggers everything else so you can make a full turn and stay centered while you do.

The shoulder blade glide also stabilizes your spine during the golf backswing.

When you move your shoulder blade in, it helps fix your spine in a safe, protected position for the violent movements that occur during the golf swing.

The golf swing is hard on your body. Especially since you're repeating it thousands and thousands of times, you need to be sure to do it correctly to protect your joints and muscles as much as possible.

The shoulder blade movement we're talking about here is the same one you would make when throwing a ball.

When you step in to throw a ball, you instinctively move your shoulder blade back, down, and in. This connects you to the big muscles of your core.

As you go to fire your hips and throw the ball, the shoulder blade is locked down and in, just as we want it to be in the golf swing, so you can stay connected to the box and use these big muscles to apply power to the ball.

The Scapula
"The scapula is pivotal in transferring forces and high energy from the legs, back, and trunk to the delivery point, the arm and the hand, thereby allowing more force to be generated in activities such as throwing than could be done by the arm musculature alone. The scapula, serving as a link, also stabilizes the arm to more effectively absorb loads that may be generated through the long lever of the extended or elevated arm."
W. Ben Kibler, MD and John McMullen, ATC
Journal of the American Academy of Orthopedic Surgeons, Vol 11, No 2, March/April 2003

That's the key to this movement; it creates rotation in golf and stabilizes the spine, and it's a natural athletic motion that you already instinctively know how to do.

You just have to learn to do it with a golf club.

If you go outside and throw a few balls, you'll notice that your shoulder blade goes all the way down and in toward your spine. You can feel it.

This is the same thing you want to feel in the golf swing.

As you're rotating back in the golf swing, you want to feel that shoulder blade really lock down and in.

This is a fundamental piece of the power of the golf swing.

Those are the primary functions of it, but you don't need to overdo it.

You're not trying to go in there and really wrench your shoulder blade down and in. That's not the correct movement - that would make it too robotic.

It's a very athletic movement.

When you go to throw a ball, you don't think, "OK, I'm going to really pull my shoulder blade down and in," and then, "OK, now I'm going to lunge and throw." Of course not.

You don't want to do that in the golf swing either. It's the same fluid, gliding motion as throwing.

That's what you want to envision when you're moving your shoulder blade. It doesn't reach the point where it stops moving until you're all the way at the end, and your hips are starting to go back the other way. 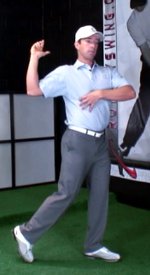 The arm is all the way back. Hip and torso movement will deliver it forward

That endpoint is where you get the differential between your upper body and lower body.

When your shoulder blade "hits the wall" and can't go back any farther, that means it's connected to the rest of your body, ready to be transported forward by the rotation of your hip and torso.

That's really what you're doing with the shoulder blade glide. You're slowly gliding it back as your torso and obliques are firing, pulling everything back.

Your shoulder blade moves back so that, when you get to the top of the swing and the hips are going, that shoulder blade is in position and ready to bring the club back down with some power.

Take some time to really feel that. Go out on the range and, instead of hitting balls, try throwing a couple.

Feel what your shoulder blade is actually doing. You'll find it's the exact same motion.