A simple golf swing system is the topic of second installment of the Student's Guide on How to Translate Information into Progress.

What does that mean? Those in the engineering community will know a system as "A set of interacting and interdependent entities forming an integrated whole."

The five elements of the golf swing are interdependent. They form a simple golf swing system.

This is true in the golf swing too: the quality of each element depends on what comes before it.

If the setup is no good, odds are by the time you get all the way to follow through you're not going to have a very good result. 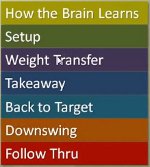 We know that RST works with a Learning System - you've all seen the hierarchy of learning. Nothing we're going to discuss today challenges any of that.

What we're going to talk about today is monitoring progress and performance.

Depending what type of activity you're involved in and what your goals are, there will be different ways to monitor and evaluate your performance.

What About the Handicap System?

Some people will say that golf already has a system of evaluation - the handicap system.

The handicap is certainly one type of evaluation and tracking, but it is a flawed one for the RST student because all it measures is your ability to get the ball in the hole.

A handicap score could mean anything.

A poor ball striker who is great at putting and chipping may have an 8 or 9 handicap, while someone who can hit the ball a mile, and accurately, but doesn't putt well may have a 10 or 11.

The system we're going to discuss today deals strictly with the golf swing itself.

Let's look at an example of a system. The engine cooling system in a car is one that most of us are familiar with on some level.

The purpose of this system is to carry waste heat away from the engine, to keep it cool. 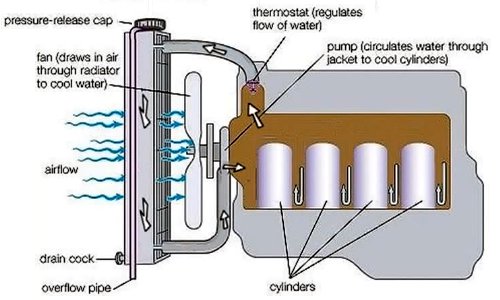 Engine cooling is an example of a system.

As a vehicle owner you may not give it a lot of thought until somebody tells you they have to do work on it or you get that red warning light that says that you're overheating.

Hoses and seals keep the water inside the system. The pump moves the water around. The thermostat is a tiny part with a huge impact.

If it were to fail or shut it would keep the water in the engine block, which would overheat. Then you have the radiator itself, and the fan.

It used to be the fan was belt-driven off the engine and ran all the time.

Nowadays they're electronic and come on with temperature changes, so they're actually less important in cooler climates than they are in warmer weather.

This is just a basic system with five components to it.

Basic control chart (above), broken down into categories (center), applied (below)

An engineer would use a control chart to monitor system performance.

Anyone who has studied statistics will have seen this sort of thing before.

Engineers turn that chart into a sort of thermometer to provide a visual indication of how well the system is doing, then break it down even more to look at each component and how it's performing.

You can see that the chart is broken down into columns in the middle image at right.

This is a fairly simple system. If we were to grade it using the control chart we could say that if the system is holding its water then hoses and seals are fine, they're green.

The lower image at right shows the first three columns in green because our first three system components are doing fine.

Maybe the car has a couple hundred thousand miles on it and there's some scale on the radiator, so that's down in the white space.

Now say the electronics on the fan have failed. Maybe it's winter and you don't even realize it. Then you find out the hard way, stuck in traffic on the first warm day of spring.

That component is down into yellow space, where there are some issues that need to be addressed.

What Does This Have to Do With Golf?

Now let's shift gears and talk about RST as a simple golf swing system. Just like the engine cooling system, we have five fairly well-defined areas:

Now you can use the same type of chart to measure and assess your golf swing and see where you are in the development process.

You can come back to the chart any time to monitor your progress and performance.

Let's start with some definitions. Green is good, but what does that actually mean? "Good" exhibits all important elements.

You'll notice that it's not a very big space on our chart, and that's intentional. It's not easy to get to where all important elements are clicking. 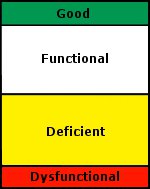 Defining the terms in the control chart; what does "Good" mean?

If you're a real perfectionist, remember that green doesn't mean perfect.

Perfection is at the very top, the last row of green molecules before you hit the black border. That's perfection.

On the other end, the red Dysfunction space is also small.

Most golfers, especially students of RST who are studying and working hard on the golf swing, are not going to be in dysfunctional space either.

Where there is a lot of room is in the two remaining spaces, Functional and Deficient. Functional means you have most of the key elements and you do them consistently.

You may not have every single element but it's functional; you can get around a golf course with it. Deficient means inconsistent and missing key elements.

Dysfunctional, of course, is broken. There are few if any key elements or attributes of the golf swing to be seen.

We suggest using this chart for your own golf swing. It gives you a common language with your golf instructor so you can ask, for instance, "Am I in the green space with my setup? Where am I with my takeaway?"

If you have that conversation quarterly or monthly, you'll see trends starting to emerge.

In this example the student's backswing is moving from white to green in Column 3 while their downswing and follow through are moving out of yellow space toward white in Columns 4 and 5.

That's a fairly realistic chart. You can see progress over time.

A golfer who is progressing from just learning the golf swing to being able to play can pull this out and compare it to the instructor manual, where you can find all the attributes of the various swing elements.

You can assign yourself a grade in each area, then look back over time and see the trend.