Speed vs. Power in the Golf Swing

Speed vs. Power - Which is it that you want in the golf swing?

Many golfers think they need to generate more "power" in their golf swings to hit the ball farther, and this has lead to some fundamental flaws in both golf instruction and the average golfer's perspective of the golf swing. This age old question has been given many answers over the years, but as with all things RST, there is a logical answer to put this myth to rest.

A lot of the confusion over the idea that you want "power" in the golf swing comes from those who try to relate the golf swing to a baseball swing. However, there is a significant difference in these two sports.

In baseball, the ball is travelling at speeds in excess of 90 mph; therefore, it has a great deal of kinetic energy. Even though the baseball only weighs 5.12 ounces, it effectively weighs 87 pounds when travelling at 95 mph.

A golf ball, on the other hand, isn't moving when it is struck; therefore, it has no kinetic energy. Its mass is only 1.6 ounces compared to the effective mass of the baseball of 87 pounds, it should become immediately clear that the parameters for properly striking each ball are very different. 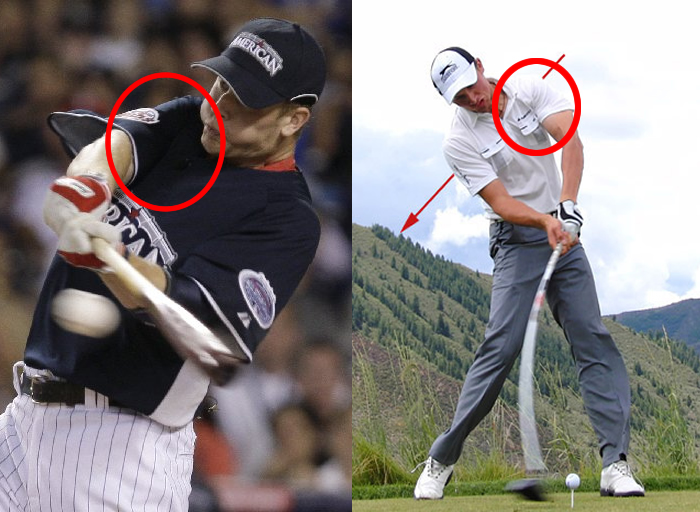 In the image above you can see the difference between power and speed. For the baseball player, having the lead arm smashed across the chest allows him to use his upper torso to absorb the force of the ball. With golf, the force of impact is far less severe, and the lead arm separates from the chest to allow the hands and arms to move much faster than the rotating torso.

Observe the picture above of a major league slugger hitting a homerun and long drive champion Jamie Sadlowski hitting the equivalent of a "homerun" in golf! Notice how the baseball hitter has his lead arm draped across his chest; whereas, Sadlowski's lead arm has clearly separated from the upper torso at impact.

If you've struggled with hitting the ball as far as you think you should, read on....

Because there is so much kinetic energy with a baseball, a hitter's lead arm is often across his chest at impact to help support the arm and transmit energy from the rotating torso.

In golf, this would be the equivalent of a "stuck" position at impact.

We don't need to absorb the tremendous loads that a batter does. In fact, we need to get the arms to release off the chest in order to allow them to accelerate faster to transfer power into speed in the golf swing.

Whereas a major league baseball hitter swings the bat at 70+ mph, a long driver of the golf ball such as Jamie Sadlowski will swing in excess of 140 mph, or double the speed of the baseball bat.

A portion of this speed is due to the length of the golf club vs. the length of the bat, and the other portion is due to the golfer's hands accelerating to well over 20 mph vs the batter's more modest 14 mph. When you understand that hand speed and lag are the two most important determinants of how far you can hit a golf ball, you start to realize that the phrase "power in the golf swing " is less important than thinking in terms of "speed".

In this video, I discuss the concepts of speed vs. power in the golf swing and demonstrate a simple drill that will help change your perspective on what the golf swing should feel like.

If you feel that you are working hard in the downswing with your body, then you are not moving very efficiently and need to work on this drill to get the club head moving faster than you ever thought possible!

One of the most common misconceptions in the golf swing, for golfers who are trying to hit the ball further, is that they need more power in the golf swing. Not that power is not important, but the understanding of what really helps the ball go further is the key. 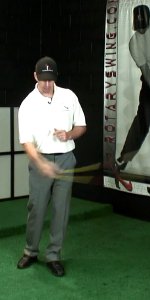 It is speed, not power, that we need at impact

I have a stick here. It doesn't weigh anything; very, very light. The reason I want to use this is to illustrate a point; that it's not power that you need in the golf swing. When I think of power, what happens for most golfers is they start thinking about taking their whole body, their hips and their torso and everything, and putting all this mass into the ball.

While that feels very powerful, it's not. In fact, it actually impedes the release of the golf club and actually can tend to cost you speed in the golf swing and put a lot more wear and tear on your body as you're working harder to rotate on your hip and your spine through impact.

What you need to realize is that all you're really looking for is speed rather than just power in the golf swing. Speed is what's going to make the golf ball go further, apart from square club face and all those other things; we're just going to assume that those things are correct for the purpose of this golf instruction video.

When you're looking for more golf swing power, what you're really looking for is golf swing speed. You can imagine that, just by sitting here and getting a little bit of snap in my wrist, I get a tremendous amount of swing speed with no effort. I can do this all day long, and you can hear this stick, whipping through very fast.

When you realize that your hands - even for the top players in the world, the fastest, longest hitters on the PGA Tour, the Hank Haneys of the world - his hands at impact are only moving about 21 miles an hour with a driver, but he's producing 124 miles an hour of club head speed. Now that's efficient power in the golf swing.

Five times, six times the speed that his hands are moving at impact, is how fast the club head is moving. Now, part of that can be accounted for by the length of the shaft - obviously, the longer it is the faster it's going to be moving - and, two, the release of the wrists.

This should be your feeling of the golf swing, not, "I'm going to rip through it as hard as I can." If you don't have a stick around, a great way to start changing your concept of how you swing the golf club is to just take your club when you're warming up and flip it upside down. Start making your golf swings and get the feeling of a release. 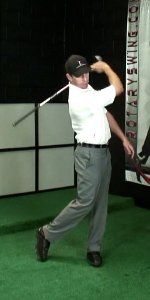 And speed only matters down here at the bottom. I don't care how fast your follow through is, or your backswing. I'm trying to produce speed at this point. That means sequencing is the key, and not just driving your body through as hard as you can in an all out effort to produce powerless swing speed.

Rather than thinking about trying to produce power and hit with these big muscles in your body all the time, think about using your body to move in the right sequence to get the right alignments and positions, and so on and so forth.

At the bottom, we want to learn to release the club with speed. Just practicing with the club upside down can get you the feeling. Notice how quiet my body is, but there's a tremendous amount of speed, and that's what you want to feel in your golf swing.

Get Your Free Membership to Watch "Speed vs. Power in the Golf Swing" Right Now!