Is the Rotary Golf Swing 1.0 an Outside in Swing

Many students tell us that when they're working on learning the Rotary Swing, they feel like they're swinging over the top like an outside in golf swing. They want to know if that's correct.

The answer, perhaps surprisingly, is that yes, that is absolutely the correct feeling. It has to do with the path the hands travel on the downswing. 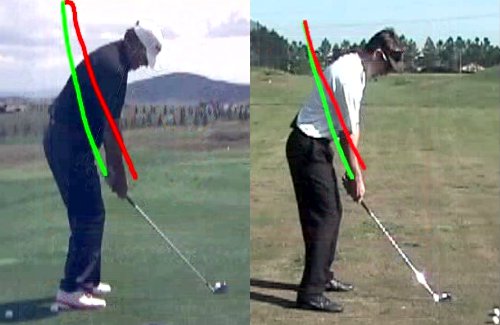 We're getting ready to start a long lesson series all about impact position in golf, and we're going to kick it off here with a discussion of exactly what you're trying to do with your hands during the downswing, what they're responsible for and, more importantly, how it should feel like an outside in swing when you do it correctly.

We'll do this with a comparison of two golfers, Adrian Wadey on the left and our own Chuck Quinton on the right. We've drawn some lines on the photos to show the path traveled by the hands during the swing. The green line represents the backswing, and the red line is the downswing.

As we advance each of the golfers to the top of the swing (below), the hands have now traveled the green path, and are getting ready to come back down on the red path. 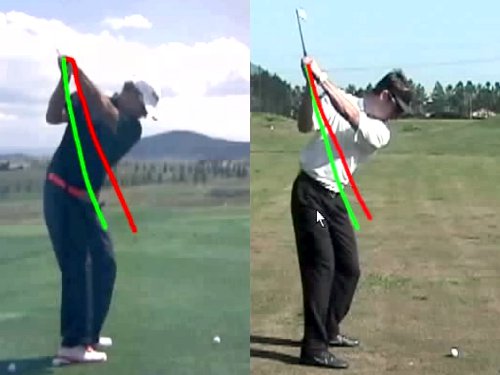 Now that we're at the top, what do we actually do on the downswing? As you know, we rotate. We want to get the core of the body rotating back to the left, keeping the hands and arms soft. This creates the feeling of an outside in swing.

As you can see, if Adrian starts rotating down on the left or rotating his body to the left without doing anything with his arms, that will pull his hands slightly over the top, onto that red downswing path. 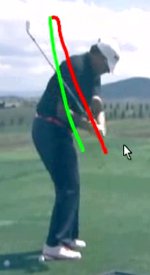 Adrian on the downswing

His hands come in slightly over the top of their position on the way back. This is perfectly normal, and has a lot to do with the dynamics we're trying to achieve at impact.

As we'll discuss shortly, you want your hands to travel more of a straight-line path from the top of the backswing to the downswing impact position.

Let's look at Adrian's swing. His hands rise a little at the top, then start back down on a completely different path than they did in the backswing. This is not only perfectly normal or acceptable; it's actually ideal.

You don't want your hands tracing the same path down that they took on the backswing. If they do, it shows that you're not rotating enough. As long as your hands are shallow at the top and you work to get them down you'll get into a good impact position it will feel like an outside in swing or that you're coming over the top.

Why is this so important?

First of all, is the downswing technically over the top? Absolutely. The answer is 100% yes. Why? Why is that desirable in the downswing?

Overlay showing both address and impact

One reason is that we're trying to use our body, more than our arms, to hit the ball. From their position at the top, our arms are just getting a free ride coming down. They're just along for the ride. They're coming back down while the body is turning, and that's pulling them slightly over the top, the same feeling as in an outside in swing.

If you used your arms first and didn't turn your shoulders, they would come down on an inside path. We obviously don't want to do that in a Rotary Golf Swing. We try to get our shoulders open.

We need to come down on a more direct path to the ball.

This is perhaps one of the most important aspects of learning how to get into a proper impact position, which is why we're featuring it in the Impact lesson series.

Look at the composite image of Adrian taking a face-on shot. This image shows where his hands are at address (centered) compared to their position at impact (more to the right).

Notice that his hands are a good seven, eight inches forward of where they were at address. Why is that? That is the question. How did he achieve that position?

When we look at the down the line photos above, it looks like Adrian is swinging over the top with his hands on the way down, and it's absolutely true, he is.

To the golfer, the hands seem to travel this path

The feeling Adrian has when he takes the shot, and that most golfers have when they're trying to achieve these positions, is this that the hands travel on the path shown in red on the photo at left.

The hands don't actually follow that straight-line path, but that's what it looks and feels like to the golfer. In our example, the sensation Adrian has is that his hands take a straight line path from the top, down into the impact position.

Furthermore, from his visual perspective, it looks like his hands are a foot or two out in front of him.

The green line on the photo in the next section runs from Adrian's eyes through his hands, showing what he needs to see at impact in order to achieve this hands-forward impact position, a descending blow with solid compression and no flipping of the hands.

The important thing is to learn what proper position looks and feels like to you. Be aware of where your eyes are in relation to your hands at impact so you'll know when it's right.

Most golfers end up with their head straight over the golf ball, represented by the vertical yellow line in the photo below. This is what happens in a true outside in golf swing.

They don't stay behind the ball, but get their hands straight over it so instead of Adrian's visual (the green line) they get the hands, club, and ball all lined up vertically at impact.

Of course, that's going to lead to high, weak, flippy shots with the hands, and we don't want that.

If, from your perspective, your hands look like they're directly over the ball at impact that means you're on the yellow line, and that's a bad position. You'll never compress the ball properly and you'll never be consistent as an iron striker.

The hands should work slightly over the top on the way down, as we saw above. They should feel like they travel that red straight-line path.

The opposite of that would be if the hands were to travel on a rounded path like the curved yellow line in the final photo. This is much more common for players who don't strike the ball very solidly, and amateurs who flip the club at impact.

Those golfers feel like they make a very wide arc with their hands, with the hands and club working way out away from the body, much too shallow, so they're already at impact when their hands are in front of the right thigh, whereas Adrian's club is still parallel to the ground in that position. 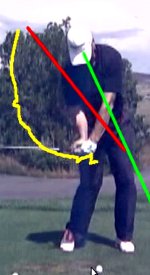 Amateurs feel as if they have a wide arc (yellow)

It's critical that you feel three things in your swing:

This will make a tremendous difference.

It's very difficult for a lot of golfers to break the habit of flipping the club at impact. In fact, it's probably one of the hardest bad habits for the average amateur golfer to break. It takes the most discipline and persistence to overcome.

It's very tempting to flip your hands at the ball because it feels faster. It feels like you get a little more speed and control, which is why we always want to over-use our hands in the golf swing.

Of course that's not what we're doing in the Rotary Swing. Our hands are simply being brought down by the rotation of the body. You're just swinging your hands down along with your body, not doing anything with the club all the way down. The club is just going to release naturally.

Adrian's feeling, when he's hitting the ball, and his thought through the swing, is that he actually "forgets" that he has arms. When he forgets about them, his arms come down naturally in the right position and get into the ideal impact position we saw in the photos.

Work on your visuals. Learn what it looks and feels like to be in the correct position. It'll take some time. We'll be back soon with more lessons, including drills specifically designed to help you learn to groove this motion even more.

Get Your Free Membership to Watch "Stop Coming Over the Top in the Golf Swing and Slicing" Right Now!