Get ready to learn my secret trick for how to putt with Tiger Woods like focus!

There are a lot of components to putting - reading the green's slope, speed, grain, etc. While a lot of attention these days goes into these topics, little attention is given on perhaps the most important aspect of putting - the mental approach to focusing your attention.

A lot of golfers over the years have struggled with the so-called "yips". I say "so-called" because the yips are not some sort of real, medical condition that some golf instructors seem to think it is.

Rather, it is a breakdown in the mental processes and being overly concerned with the consequences of the outcome of the putt.

To help you overcome the fear of a missed putt we could talk about the mental aspects of golf all day long, and I have written numerous articles on the topic. Instead, I want to give you the keys to my putting routine that will not only help you overcome your putting fears, but also help you hole more putts from any distance. 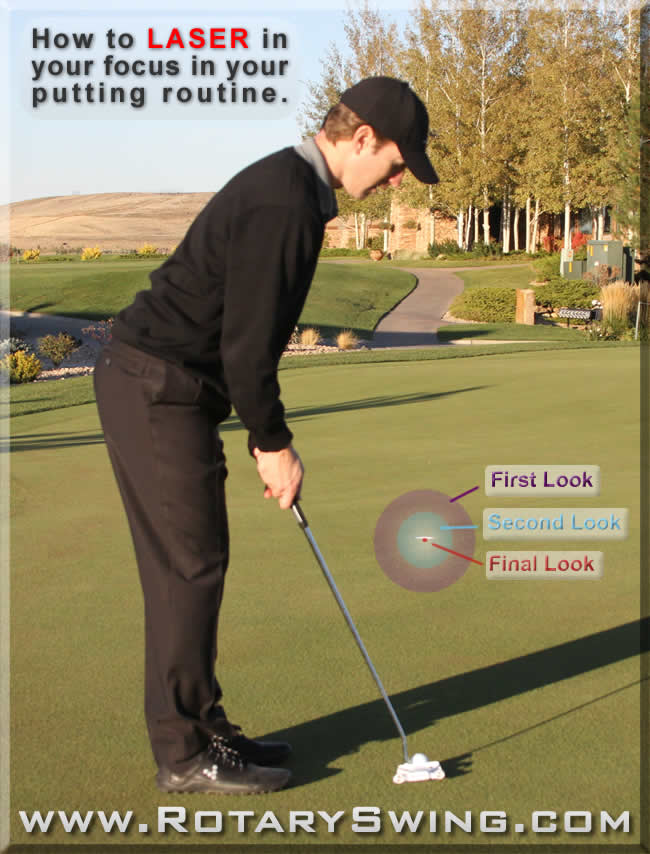 This image shows the three stages of focus in my putting routine, each getting more focused than the last. Click image to enlarge it.

FIRST LOOK - SET UP TO THE PUTT

When I first approach the ball to get set up to make my putt, I set the putter down on my intended line and get my intial look at the target. I don't want to try and get too locked in on the details just yet because the first setup needs room for correction. I shuffle my feet slightly, adjust the putter head alignment, etc. during this phase of the setup. Again, I'm just trying to get my initial direction here.

Now that I am settled in, I make micro adjustments as needed. My targeting process is getting narrower. As I look up the second time, the area I am focusing on becomes smaller as my setup routine gets more exacting.

As I look up a third time, my focus becomes extremely tight. I am looking for the smallest possible target to focus on.

Depending on the distance and the break of the putt, it may be as small as a piece of grass or a mark in the back of the cup.

At this point, nothing can break my concentration as I have moved through a "funneling" process to slowly let my mind engage in the target rather than trying to demand that my mind take a giant leap from setting up behind the putt to instantly getting over the putt and locking.

The mind can be like a wild horse, and it is better to try and reign it in slowly and gently through a process rather than try and jump on its back and force it into submission. 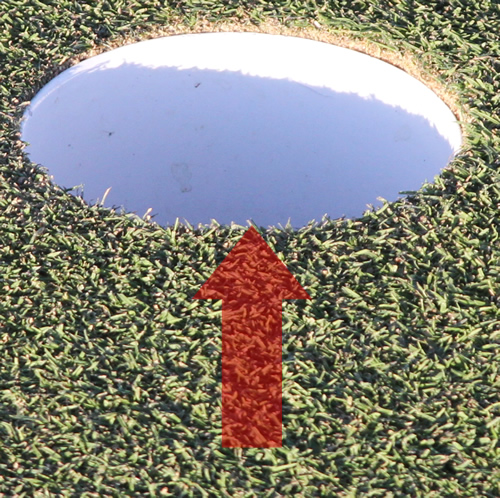 Your focus should be as tight as possible, even an individual blade of grass.

THE SECRET: PULL THE TRIGGER WITHOUT HESITATION

Now for my secret putting key for how to putt like the putting greats. Once I have my extremely specific target in site and I look back to the ball, I pull the trigger - even before my head has stopped moving. This makes the process more natural, fluid, dynamic - and keeps you from getting tense over the putt. It all happens as one smooth motion.

My mind never has the time to switch modes from being locked in on my target to worrying about the outcome. If you struggle with your putting, this will be a huge mental relief for you. You won't have time to talk yourself out of making the putt. It will be a more natural, athletic process for you.

I liken it to a basketball player shooting free throw. A great free throw shooter never stops moving from the dribble to the release. It's all part of the sequence.

Unless you're Shaq. He did stop moving, and he had the equivalent of the yips in basketball!

WHAT ABOUT BREAKING PUTTS?

The only difference with a breaking putt is where my focus is, but the process is exactly the same.

Instead of putting my "rings of focus" around the hole, they may be on the apex of the putt or on a specific spot I want the ball to roll over during its way to the bottom of the cup.

Go out and try this technique today. It will not only free up your nerves to allow you to make a great putting stroke, but it will help you make more putts by being more specific with your target.

The more you can narrow in that "Final Look", the more accurate you will be.