Get Instant Feedback to Roll Your Putts Smoothly

Most golfers would be very surprised to learn that you can hit a putt with the perfect speed and the perfect line, and still miss that putt. 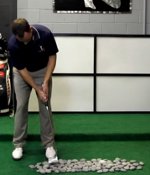 Bouncing kicks the ball off line like putting through rocks

Putts get thrown off line when the ball starts to bounce on the green and gets kicked off its initial line. It's a lot like putting through a pile of rocks.

You can see how that would be detrimental to your game and inhibit you from making those crucial putts.

It used to be very difficult to test this. You'd have to have a $30,000 camera that could produce a crystal clear picture at tons of frames per second so you could see if you were getting the proper roll.

Fortunately we have a training aid today that's easy to use and will allow you to get the perfect roll in just a few minutes. We'll also give you some tips on how to perfect your stroke to get a good roll.

If you're interested in making more of your putts, this lesson is for you.

The first thing we need to understand is what we mean by "good roll."

Imagine a giant golf ball sitting in your front yard. It's heavy, so it's going to press down into the turf. A regular golf ball does exactly the same thing on a smaller scale. 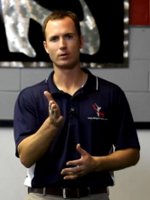 The putter should have 4-5° of loft

Your putter is designed with a certain amount of loft. Most putters have about 4-5° of loft.

This way, if you swing perfectly level through the ball and get a couple degrees of forward shaft lean, you'll still have about 1-3° of loft on the putter face; just enough to get the ball up and out of the grass and rolling very smoothly on the green.

Things go wrong when you have too little loft and you end up hitting down into the ball. You smash the ball down into the ground and then it pops up and bounces.

Too much loft causes a similar problem because then you're hitting up into the ball and just launching it into the air. Again, it ends up bouncing.

What happens when the ball starts to bounce? 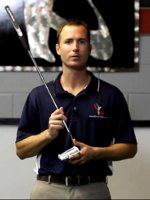 A green is obviously not a perfectly smooth surface. It's covered with grass and tiny twigs and bugs and all kinds of things lying on the surface.

When your ball is in the air and lands on the green, the right half of the ball may land on a surface that's a little harder or raised up a little higher than the left half. That's going to kick the ball to the left.

It bounces up and lands again, smashes into the ground, and maybe it kicks left again. You're not going to get a true roll, whereas if the ball just rolls across the tops of the blades of grass it's going to stay very straight.

That's the key. If you get your ball rolling smoothly right away it's going to hold its line much better than if it starts hopping and hitting soft and hard spots on the green and getting kicked off line.

Hitting Down on the Ball

Let's look a little more closely at what happens when you hit down into the ball. 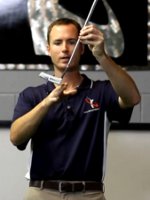 You know that if you hit the ball down into the green it's going to bounce up and launch into the air, but how did you end up smashing it down in the first place?

The number one culprit is the loft on your putter.

We mentioned that a standard putter is supposed to have somewhere around 4-5° of loft. However, we've tested a lot of putters and some have had as much as 12° of loft, while others had 1-2° or none at all.

Putters are tested when they're first manufactured to make sure that the loft is correct, but then maybe they get banged up in shipping, or you miss a big putt and slam the face against your foot, and all of a sudden the putter no longer has the proper loft.

That's one of the first things; your putter may be the problem. Measure it to make sure it has around 4-5° of loft. 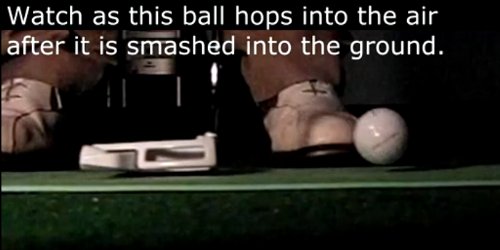 Too much forward shaft lean: The ball is smashed down and hops up off the green

If your putter isn't at fault, then you may be getting too much forward shaft lean.

As you know, when you lean the shaft forward you're taking loft off the face. If you get too much forward shaft lean or you're hitting down on the ball you can smash the ball down into the green.

You do want some forward shaft lean, but anything more than 1-2° and you risk delofting the club too much. The ball won't hop up on top of the grass and roll right away if you're hitting it down into the grass.

Get Instant Feedback With the Putting Mat

Fortunately, you don't need to film your ball at high shutter speeds to find out what's going on with your putts. 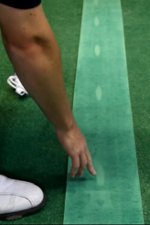 Hitting down on the ball leaves this path

This Putting Mat shows you the roll of the ball after each shot. At left you can see the path Clay got from hitting down into the ball.

There's an indentation where he initially smashed it down into the ground, then it hopped up into the air and didn't land again until the next spot, farther down the mat.

It bounced there, then hopped up again several times. The ball didn't actually start to roll until it got six or seven feet away.

Once you've seen the results you can just rake the nap of the mat back with your putter. This gets rid of the lines so you can take another shot and try out some different techniques to get a better roll.

Launching the ball up into the air is the opposite of hitting it down into the ground, although the results are actually similar. 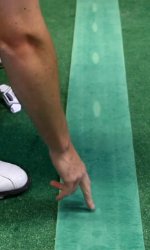 Hitting on the upswing leaves this path

As we mentioned above, we once tested a putter that had 12° of loft - that's basically the launch angle of a driver!

If you're coming perfectly level into a ball and you've got 12° of loft on the putter face, you're going to get a terrible roll. As above, start by testing your putter to make sure it's got 4-5° of loft.

If your putter face is not to blame, that means you're either flipping through impact, which adds loft, or you're swinging up and catching the ball on the upswing. Either of these things will cause a bad roll like the one shown at left.

You can see the indentation where the ball was sitting initially, then it immediately left the ground and it didn't land until about 15-16" in front of the initial location. It hopped up from there again, and bounced several more times.

Now that you know what can cause a poor roll, let's talk about some adjustments we can make so you get a great roll every time. 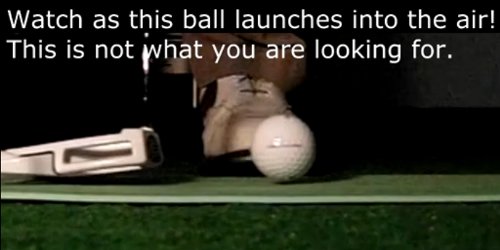 The ball launches when hit on the upswing

The Putting Mat will show you exactly what kind of roll you're getting with your own putting stroke. 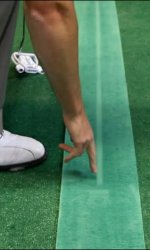 There are a couple of tricks to making the most of your Putting Mat:

Start out by making a few putts to check your roll. If you see that the ball is skipping like in the photos above, follow the instructions in the next section to make some simple adjustments and achieve the perfect roll right away.

Get the Perfect Roll

If the Putting Mat reveals that your putts are hopping up into the air, the fix for you is going to be to move the ball about an inch back in your stance.

Launching the ball is the result of hitting up on the ball, and moving it back will steepen your angle of attack.

Move the ball a little farther back than normal and go ahead and hit a putt to see if it helps.

If you find that the new ball position makes it worse, then you were probably hitting too far down on the ball already. In that case, rake back the mat and move the ball an inch forward of your normal ball position. 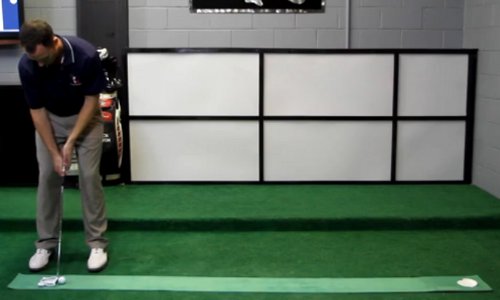 Try it out a few times. Really fine tune your ball placement and you'll start rolling that ball better than ever.

When you hit one properly you should see a nice even, consistent line with no thick or thin spots in the first three or four feet of the putt. That means the ball got on top of the grass immediately and started to roll very true.

If you're ready to start rolling the ball better than you ever have before, just visit our Training Aid Shop and for your own Putting Mat.