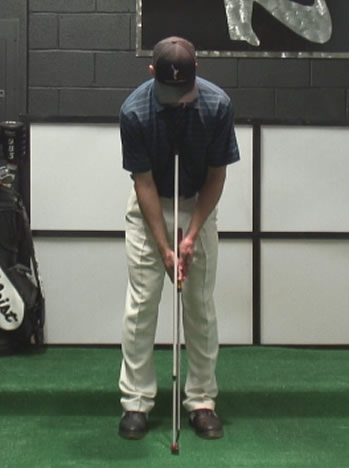 How many times have you heard that the putting stroke should be like a pendulum and wondered just exactly what that means?

In it's simplest terms, think about the "pendulum" aspect of the putting stroke meaning that the radius of the arc remains constant throughout the stroke.

In laymen's terms, that means that the distance from your sternum to the sweetspot on the putter never changes.

Imagine a grandfather clock with its pendulum swinging and you get the idea. But more importantly, WHY do we want a pendulum type stroke?

Putting requires a phenomenal amount of precision because being off only one or two degrees from 10 feet can cause you to completely miss the hole on a short putt. The need to be this precise means that we need to eliminate as many extraneous moving parts as possible or our stroke can break down and introduce inconsistencies. 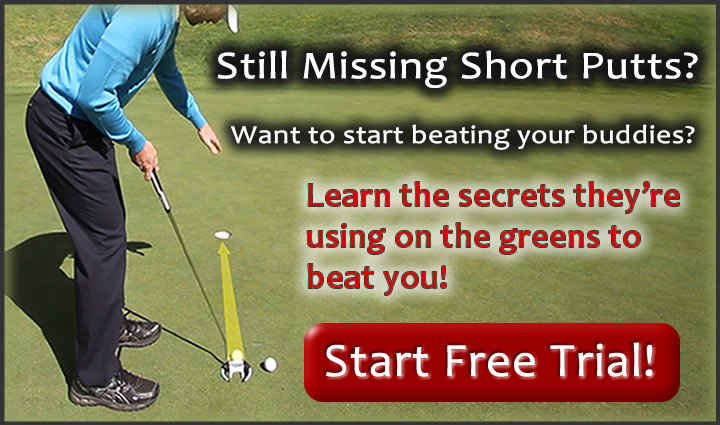 One of those inconsistencies that is detrimental to putting is the quality of contact with the ball. If you catch the ball too much on the upstroke you will hit the ball "thin" and the putt can come up short. This often happens from three different causes.

First, the golfer is incorrectly using their hands and their wrists break down in the stroke. This "flipping" motion will cause the radius of the stroke to shorten and the Pendulum Putting Rod used in this video will give you a gentle reminder jab in the chest. Problem 1 fixed.

The second most common problem is that the golfer doesn't place the ball in the same place at address or the putter is not in the same alignment each time. Using the Putting Rod you can see that my putter shaft is perfectly parallel to the Putting Rod which is anchored to my sternum in the picture to the left.

This fixes both problems because the putter shaft will now always be in the same position at address, as will the ball when practicing with the Putting Rod. These two simple fixes make up the majority of putting problems that one will often see.

The third very common problem is the stroke itself. Golfers who don't know how to "swing" the putter will often move it all over the place without ever realizing it. A very common fault is for the putter head to move too far to the inside during the takeaway.

This leads to pushed putts and inconsistent contact. With the Putting Rod, if you take the club too far to the inside, you will feel increased pressure where it is anchored to your chest, reminding you to keep the radius consistent throughout the stroke. This is basically the same principle that the long putters work on, but allowing you to use a conventional length putter.

This simple device is fixing a lot of putting problems and is a lot cheaper than a lesson with an instructor who is only going to try and get you to do the things that great little training aid teaches you by itself!

I have been using the Pendulum Putting Rod in my lessons for months now and it has made an immediate impact on how my students swing the putter. Watch the video to learn more about the proper pendulum putting stroke.

One of the things that you frequently hear when you hear instructors or other golfers talk about the putting stroke is that it should be like a pendulum. 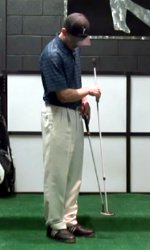 Putting Pendulum: The red cap sits behind the sweet spot

For a lot of golfers, they don't really understand what exactly that means. How do you create that pendulum-like stroke? Why do you want a pendulum-like stroke? It's very difficult to get someone to feel that if they're not used to rocking their shoulders and keeping the putter at a constant radius from their chest.

As you know, there's lots and lots of training aids out there. This one's as simple as it gets, and that's why I like it. It does exactly what it needs to do, and that is to get you to feel the proper motion of a putting stroke.

All it is, is basically a small, lightweight aluminum rod with a little piece of red rubber on the end and then a little knob at the top that you set against your chest. Here's the whole premise of it: You take this red end cap and stick it behind the sweet spot of the putter. 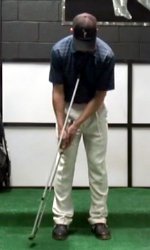 From here, it's just sitting right behind the logo on my putter, right where the ball would go. This is adjustable, by the way, so if you're taller or shorter it telescopes up and down.

Then as I step into my setup, I rest the soft piece at the top up against my sternum just as if I had a long putter. Now what I've found is, if I rock my shoulders, the pressure on my chest where the Putting Pendulum is anchored to my chest, stays constant unless I do something bad.

If I try to yank it inside, it kind of jabs me up in the chest, or if I get disconnected I lose that pressure on my chest. I don't feel it connected to my body anymore. This is showing you that you're changing the radius of your stroke - the radius being the distance from your sternum to the putter, which should always remain constant. 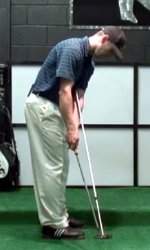 It falls out if you swing too far

Now you know that you're not taking the putter out away too far from your hands, which is a common fault. If you look down the line and I start to take the putter out too far, now you can see this falls out of my chest.

It should remain constant, back and through. It must work on an arc in order for that to happen.

This simple little device just shows you exactly how that should feel. If you've always wondered, "What does a real pendulum putting stroke feel like?" The Tour pros are so smooth, and they have a very, very simple stroke.

On tour, this is one of the hottest training aid devices that is out there. EyeLine Golf can't keep these in stock for their Tour rep, because every single guy out there is using one of these things, just about. They've given away dozens and dozens and dozens of these things to the guys on tour, from the top 10 players in the world, who are all using this simple device. 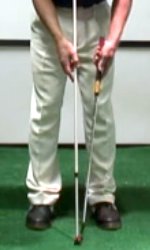 The putter is not aligned with the pendulum

They recognize that it makes a lot of sense. It's as simple as it gets, and it works.

The other thing that you can check with this is that, as you're set up, your putter is in line with this shaft. You can see this would be out of alignment. This would be too far back. As I set it up, I want it to be parallel to this shaft. Obviously the Putting Pendulum is sitting slightly behind the shaft at address, so it's going to be parallel.

Then what you can find is, as you take your stroke, from your perspective that should never change. How that would change is if you did something like this with your hands, and then you changed it. You're going to feel the Putting Pendulum kind of jab you in the chest if you do that.

What you're trying to feel is that that stays constant, back and through. Now you know you're not using your hands. You've just got a very simple pendulum putting stroke. That's the idea of it.

This is a simple device. It's very, very inexpensive. It's a simple thing to pick up. You can throw it in your bag.

If you're using the Putting Plane, which works - as you guys know; tons and tons of you guys have bought them - they work fantastic, the Laser Line, and the Putting Pendulum, you could not have a better putting stroke. 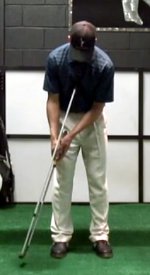 Maintain alignment back and through

Of course the other fundamentals in the Putting Performance series as far as the grip and those types of things, and setup is extremely important. If you combine all of these things, which are very, very simple training aids, very simple tools, very simple grip, very simple putting mechanics stroke, you will absolutely become a phenomenal putter.

You'll think about putting completely differently because it's not rocket science anymore. It's not Voodoo magic. You're not trying to figure out how guys make putts. It's simple.

It doesn't get any simpler than that.

Work on these things in the Performance Putting series and I assure you, you'll start making a lot more putts and shave strokes off your game.