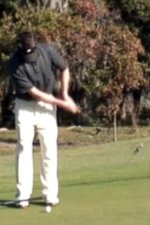 Arms can get very mobile, which is bad for the putting stroke

If you want to learn to be a great putter - and we should all aspire to that - you're going to need your 7 iron.

Why would you need your 7 iron to learn how to putt?

Don't worry, we're not going to tell you to start chipping or putting with a 7 iron!

We're going to teach you how to add your 7 iron into your putting drills and routine to unify your body and keep from getting handsy in your putting.

Most amateurs tend to focus less on putting and more on ball striking, so let's start with a little story about the importance of putting.

Remember the 2007 PGA that Tiger won? He shot a 63 on Friday. He was paired with Woody Austin, and Woody shot even par - 72. Woody was interviewed about it later, and one of the things he said was that he actually outplayed Tiger, tee to green, but Tiger simply out-putted him.

Woody said he hit it inside of Tiger 10 times, hit all the fairways - far more fairways than Tiger - and yet Tiger beat him by nine strokes. He explained that it was just that Tiger out-putted him.

Getting outplayed tee to green and winning 63 to 72 is pretty mind-blowing, when you think about it. Nine strokes in a major championship, all due to putting!

Invest in Your Putting

We all know that Tiger is a great clutch putter, but even he has streaks where he gets a little off and he comes right back. He knows how important his putting is, so he dedicates a lot of time to it. 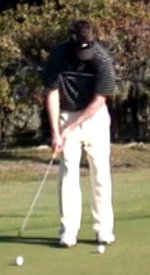 Place a 7 iron up under your arms

We encourage every amateur to spend a lot more time on putting because if you really want to shave strokes in this game, this is where it's done.

And of course we have a great drill to help you out.

If you've done some of our other putting drills you know how we want you to set up, with the shaft on plane with the forearms, etc.

Today we're going to show you how to use your 7 iron to unify the stroke.

You're simply going to hold the 7 iron across your chest, up under your arms, and then take your normal putting grip.

This locks your arms and chest together. Now as you take the club back and through you have no choice but to simply rock your shoulders. 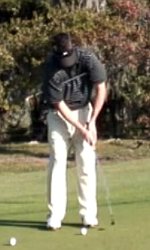 Take the shaft back out and notice that you can move your arms very independently.

You can flip through impact. The more bent your elbows are, the more your arms hang down, the more handsy you're going to get.

You can move your arms very independently of your chest. You can move the putter all over the place.

In the putting stroke, you want the shoulders to rock back and through, and this is the best way to get that feeling. It looks like a very simple drill, but give it a try and you'll see how powerful it is.

Put that shaft back and just rock it back and forth at first, then go ahead and putt with it. Putt with it for 30 minutes. Putt with it until your chest bruises from doing it so much - that's how great this drill is.

When you've done that you'll find it's a little like jumping on a trampoline. You spend 20 minutes bouncing around, then when you get off and try to walk you feel like you're still on there. It's hard to walk.

The same principle applies with this drill. When you take that shaft out, it's going to feel like it's still there. You have unified your putting stroke, so now you feel like the shaft is still in there and you can go ahead and roll the ball purely by rocking your shoulders. 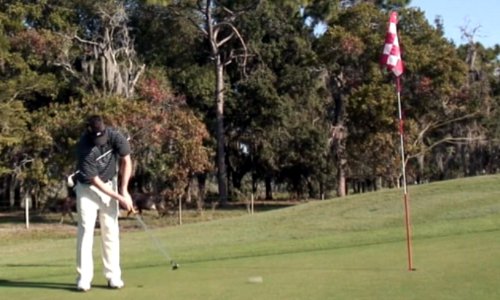 Make some putts with the shaft in place

It will feel the same as it did when the 7 iron was in place, which is exactly what makes this a great drill.

There's no reason not to do this every time you go out and play. Just make your practice putts with the 7 iron held under your arms and get a tighter, more solid putting stroke every time.

The goal is to feel very controlled. Do this drill every day, every time you're putting. You can do it right at home; it's a great drill for that.

Hold the shaft under your arms, keep it next to your chest, rock your shoulders, and watch your putting improve. 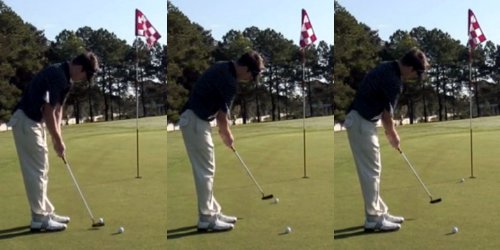