Take the Mystery out of Chipping Club Selection

When Rotary Swing Instructor Clay Ballard first learned to play golf as a teenager he would go out to practice his short game by grabbing a sand wedge or a lob wedge and hitting a bunch of shots way up in the air. 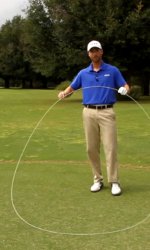 Practice with a chipping ring

Those shots look cool and they're fun to hit. Clay and his friends would try to get as much spin on the ball as possible and spin it back on the green. That was the first thing they always practiced.

As you get farther along in your golfing career you eventually realize that's not always the best play.

Sure, it's a lot of fun and it looks great, but when Clay started to play in tournaments he learned something.

He would hit one of those great shots. It would fly high and get maybe 5-6 feet away from the pin. Then the next guy would step up, maybe an older player with a little more experience, and hit a nice little bump and run.

It looked super easy - nothing fancy about it at all - but it would roll 3-4 feet inside of Clay's ball. Clay's may have looked cooler, but the results just weren't as good.

That's why we're going to talk about club selection today. How do you know which club to use?

Roll to the Hole

The general idea with club selection, especially with the bump and run chip shot, is to get the ball onto the green as quickly as possible and let it roll out to the hole. 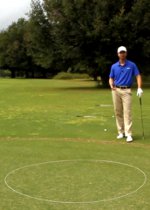 Use chipping rings for the target & landing area

To drill this, start by picking out a landing area on the front of the green, maybe 5-6 feet in. Find a nice flat, even spot.

If the front of the green is nice and flat and level and doesn't have a lot of undulation you're always going to want to get the ball on the green as quickly as possible, and then let it roll out.

The only time you wouldn't do this is if the front of the green doesn't lend itself - maybe it has a lot of undulation or a big slope.

You obviously don't want to land on the face of a hill because it might check up and roll back or kick right or left, but if there's a nice level spot your goal is always to get it on the front of the green.

Set up a 6 foot chipping ring for your landing area, and a small one to represent the target farther in. Clay's target is about 15 feet behind the camera in these photos. 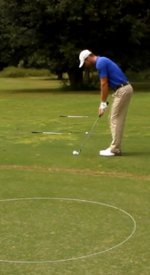 Your first shot is a basic bump and run chip shot from barely off the edge of the green. You don't have very far to go, so you'll use your 8 iron.

You want your shot to land in the circle and then roll out to the target. It should be a very easy shot, nothing fancy about it.

As you move farther away from the green you're not going to be able to take your 8 iron and land it in that circle and still get it to roll to the hole.

If you hit with the 8 iron into the circle from farther back it would probably go another 10-15 feet too long and end up past the pin. 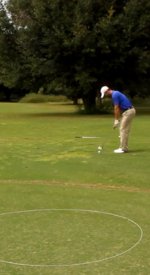 How can you hit the same landing spot using the same technique from farther back?

You still want to land on the front of the green and let it roll out to the hole, so now you need to use the pitching wedge.

It's a very simple technique, nothing fancy at all. Using the right club you should be able to make the same shot as before.

Since you're farther away you're going to need more and more loft in order to land the ball in your target area on the front of the green and still have it roll out the same distance.

Once again, you're going to hit the same shot from even farther back. The technique is exactly the same, only this time you'll use the sand wedge.

Your swing will be a little longer as you get farther away from the green, and you'll select a different club, but your technique will remain the same.

You can see the results of Clay's three shots below.

Try this drill yourself. Buy some chipping rings or find another way to mark the front of the green so you can practice landing your shots consistently.

This drill will also give you great feedback so you can start to learn how far different shots will roll out.

The more you work with different clubs and pay attention to where they land and what kind of results you get, the better sense you'll have when selecting your clubs in a round.

You'll know, "OK, I'm 30 yards away with a sand wedge. If I hit it onto the green it's going to roll out X amount." You'll develop a good feel for which club will do what you need.

Always mark a landing spot when you practice your chipping. It will be great for your short game.

Get Your Free Membership to Watch "How to Chip - Club Selection" Right Now!