Prepare for Tourneys with This Fun Chipping Game 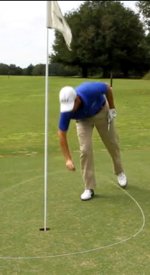 Clay was bored by repetitive chipping practice so he created a game to make the practice sessions more like a tournament or a real round of golf, allowing him to keep score and stay focused instead of zoning out while hitting the same shot over and over.

All you need to do is toss a target ring around the cup. In these photos Clay is using a 6 foot chipping ring, available on the website. A 6 foot ring gives you a 3 foot radius to chip into.

Similar rings are available from other sources, but they're often thicker and tend to deflect the ball. Ours are made of a very thin material that allows the ball to roll right over them without deflecting. They fold up into a compact circle; keep one in the trunk of your car and it will be handy any time.

The purpose of this game is to prepare yourself for a real round of golf. 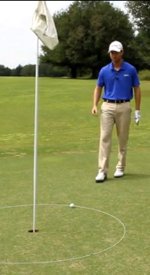 The ball rolls right over the ring

Think about it. The whole point of practicing is to prepare for an actual golf game or tournament, but a lot of golfers will get an extra-large bucket of balls, head over to the short game area of the range, dump out the whole bucket and chip ball after ball at the same two or three pins.

What does that achieve? After you've hit 10-15 shots, you're pretty much on autopilot. You're not really thinking about what you're doing or paying attention to the individual shots.

Sometimes the green gets so full of balls that they're just bouncing off of each other so you don't even know how well you're doing.

That's not an effective way to practice. You want to get good feedback and make sure you're learning and improving when you practice your short game.

To start out, just grab your favorite club. Clay favors the sand wedge, so that's what he's using in this demonstration.

Take five balls and drop them at different spots around the green. For Level 1 you're going to start out with close, easy chips on level ground - nothing fancy.

Get your first five balls maybe 20-25 feet away at the most. Spread them out so no two shots are the same.

Now go around and hit all five balls. Your goal is to get four out of the five chips into the ring. It may take five or six attempts.

Play Level 1 until you've gotten four out of five shots into the ring, then move on to Level 2. 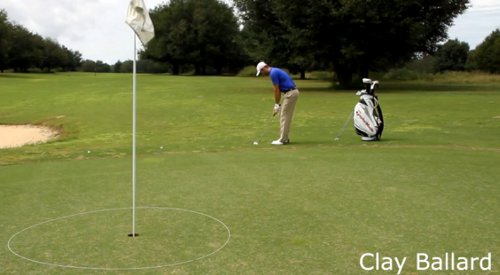 Level 2 is the same, but you're going to be a little farther away, say 40-50 feet from the pin. Pick spots with some slope or curve - something that offers a little more of a challenge.

You're going to try to make three out of five of your Level 2 shots.

When you first start playing this game, use the same club for all three levels to get a feel for how to manipulate it to hit a little higher, a little lower, and make different types of shots.

Practice until you make three out of five Level 2 shots, and then you can move on to Level 3. 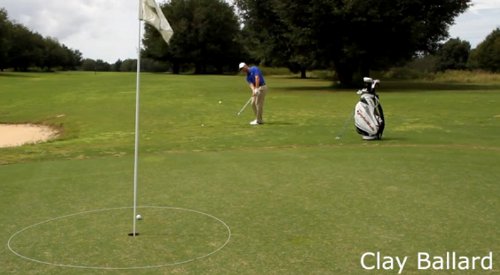 As you have probably guessed, on Level 3 you're going to set up incredibly difficult shots. We're talking bunker shots, shots that are under trees or over slopes or mounds, or shots that have to be hit just so to keep them from rolling off the green.

You can also try some trouble shots. For instance, you can step on the ball to settle it down into the ground to simulate a bad lie, or put it in a completely bare spot.

You want to get two out of five shots on Level 3. 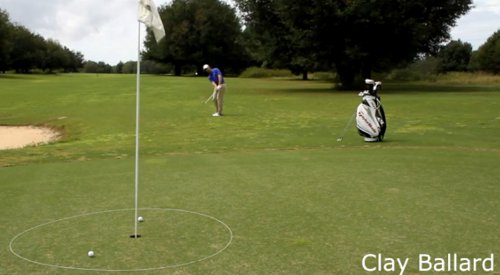 Level 3: Get 2/5 highly challenging shots in the ring

This game is great when you're preparing for rounds. It teaches you how to use one club in a variety of different ways. Once you've played your favorite club a few times you can try it with different ones.

Eventually you can start using all kinds of different clubs. Maybe you'll play Level 1 with an 8 iron, then move on to a pitching wedge or a 9 iron or whatever the shot calls for on Level 2. On Level 3, most of your really difficult shots - out of sand or over trees - will need a sand wedge or a lob wedge.

Mix it up. It's all about trying new and different types of shots and getting very familiar with how to use each club in a multitude of ways.

Get Your Free Membership to Watch "How to Practice Chipping - Ring Game" Right Now!