Learn How You Can Hit the Tiger Woods Chip Shot

Today we've got a quick analysis of Tiger Woods' chipping technique and how it compares to what we talk about in our How-To Chipping Guide. 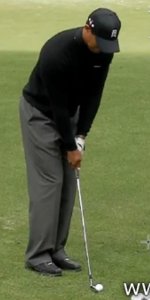 Tiger Woods sets up for a chip shot

If you struggle with chipping, it may not be your fault at all. Many golfers get bad advice from playing partners and even golf instructors.

Most of the people we see who need help with their chipping have the ball way back in their stance and their hands leaned way forward.

This will inevitably lead you to chop down into the ball.

If you feel jerky or like you have kind of a hitch at the bottom of your chipping action, this is also a big sign that you've got the ball too far back in your stance, and your hands too far forward.

Let's take a look at Tiger's technique here. We'll go over some of the things in our chipping series, see how he's applying them, and talk about how you can use them in your own game.

First, we can see in the setup photo above that Tiger has his weight on his left side. It looks like about 60-70% of his weight is on his left foot, and as we'll see he basically keeps it there throughout the swing. 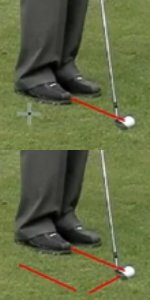 Many golfers place the ball much farther back

His stance is very narrow, with maybe a club head width between his feet, and he has the ball positioned just off the inside of his right foot.

A lot of you probably take too wide a stance when you set up for a chip, and then on top of that you place the ball almost behind your right foot. We've actually heard instructors teaching students to put the ball there.

If you take a very wide stance and then put the ball behind your right foot, your ball can end up as much as 12 inches behind what Tiger has here.

You're obviously going to be coming into that shot very, very steeply. It will be hard to avoid hitting a lot of chunks or thin shots, or pulling up out of the shot.

Another thing we can see in Tiger's setup is just a little bit of forward shaft lean. He doesn't have his hands 20-30° in front of the ball, cranked way forward. Getting the hands way forward is yet another thing that can cause you to come down very steeply into the shot.

Tiger is creating a nice shallow angle of attack. He's still going to be hitting down and through the ball, but not at a very severe angle.

Wrist Hinge in a Chipping Stroke?

As Tiger takes the club back we can see that he gets a little bit of wrist hinge, and this is good. 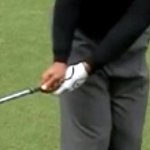 We talked about wrist hinge in the chipping series. You hear a lot about "The Triangle." We can see Tiger's triangle in the photos below.

A lot of instructors will tell you to keep your hands in front of the triangle and just rock back and through.

If Tiger did that, his club shaft would extend straight out of the tip of the triangle, as shown in the center photo below. As we can see, he doesn't do that.

You actually need to get a little bit of lag in the chipping stroke. You need to keep your wrists nice and soft and let the club hinge under its own weight a little bit on the backswing so you can stay nice and fluid.

Tiger isn't just standing there "rocking the triangle." He's letting his hands create a little bit of an angle.

It's not a whole lot. It's not like the severe angle you'd see in a pitch shot - shown in the final photo below - but there does need to be a little bit of wrist hinge. 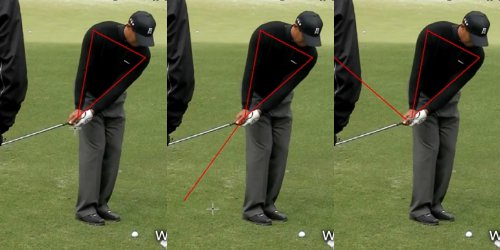 The Triangle: Tiger gets some wrist hinge, but not as much as he would for a pitch shot

One last thing we can see in the backswing is that Tiger keeps both arms very straight.

As we discussed in some of the lessons in the Chipping How-To Guide, this is an area where the RotaryConnect can help a lot. If you practice with the RotaryConnect on your arms you will learn to keep them nice and straight so you don't bend your right arm and get it pulled behind your body.

Bending that right is a common culprit when golfers struggle with inconsistent chipping. Once you start bending the right arm and pulling the club head way back inside, you're going to have to do a lot of manipulation in the downswing. 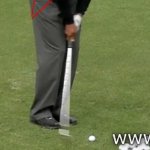 His hands lead the way

Tiger stays nice and loose as he swings through this shot.

He lets the club release under its own weight, but he also makes sure that his hands are forward of the ball at impact.

You can see his hands leading the way in the photo at left. He swings down and through the ball.

He doesn't let his left wrist break down through impact. In the next photo, probably 2 feet through impact, we can just about see that the back of his left glove is still facing out toward the target. 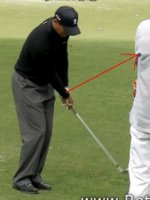 His left wrist remains nice and flat, and he keeps it that way through the shot. Maintaining that flat left wrist will really give you a lot of consistency.

The last piece we're going to look at is Tiger's knee action. If we look at his position throughout the shot we can see that he stays nice and soft as he rotates back and through.

He gets just a little bit of knee action.

His body obviously isn't rotating a lot. There's not a ton of action in a chip shot. His shoulders are rotating around his spine, but you can see that he stays nice and soft with the knees. 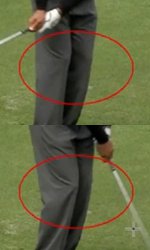 It's not like a putting stroke where you're trying to keep the lower body completely stable. It's more like a free throw in basketball, where you're getting a little bit of body action, and staying nice and loose and relaxed.

Hopefully this comparison has been helpful. It can be useful to take the topics we covered in the Chipping How-To series and see them done by a pro.

Stay tuned on the website; we've got some great videos coming up on how to fix your over-the-top move, how to get rid of your slice, how to increase lag in your golf swing, and a whole lot more.