How to Hit a Bunker Shot Like a Pro

Hitting a bunker shot is literally one of the easiest shots in golf, but to the average amateur, it can be terrifying.

The fear of blading a sand shot across the green or chunking it and leaving it in the bunker is enough to paralyze you over the sand shot and leave you just hoping for the best. 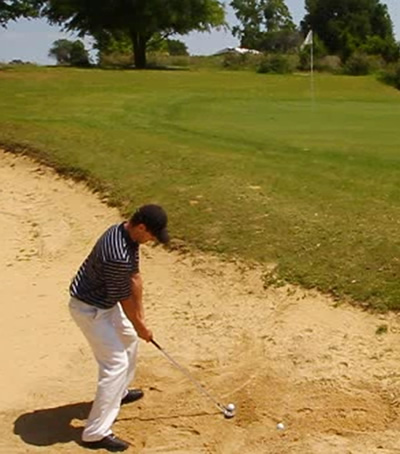 Are you set up correctly to hit a good sand shot?

Fully understanding the three keys to bunker shots outlined in this video will have you aiming at flags instead of away from houses. You'll be able to make an aggressive swing and get the golf ball to come out high and soft with tremendous spin.

To do this, you'll also find out some secrets to the setup that you've never heard before but most all the best bunker players in the game incorporate in their sand shots.

Once you make these changes, I'll give you my "Box" drill that will make taking perfect, shallow divots easy and have you hitting perfect sand shots like a pro!

In this video, I'll go in depth on all these aspects and more, covering concepts such as bounce, setup and even how you produce that "thump" sound that you hear the tour pros make coming out of the sand!

Video Transcription: How to Hit Bunker Shots Like a Pro

There are three critical things to understanding how to hit good bunker shots in golf. The bunker shot is really one of the easiest shots in all of golf, but so many golfers struggle with it. 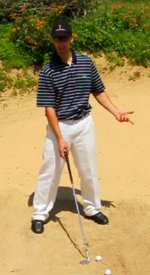 Lay the club on its back

I'm going to give you the three keys that you have to understand in order to hit good bunker shots, and also to make the shot more simple so you understand how it actually works.

The first key that you've got to understand is that we need to get the ball up in the air. Obviously, we've got to get it out of the bunker and we typically need it to land pretty soft on the green. That's going to predicate a few things.

A) We need loft. We're not going to hit our sand shots with the 3 iron, for obvious reasons. I typically use my 60 degree wedge anytime I'm around the green, unless I have a very, very long shot. That gives me plenty of loft, to a degree.

The second thing is, we need spin. Obviously if we've got a short shot we need to stop it very quickly on the green. We need more spin, and spin is dictated by two things. A) Loft - the more loft you have the more spin you can potentially put on the ball - and B) Speed. Speed is one of the most overlooked parts of bunker play. 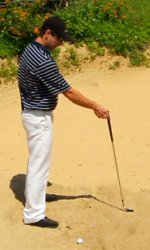 In order to do that, we need to understand a couple of simple things. The first thing is that, A) The club face never strikes the ball unless you're either trying to put a ton of spin on the ball and you need to hit it just perfect, and typically you don't want to do that.

Depending on where you play, the sand is deeper or fluffier, what have you. This is a really light, fluffy Florida sand, so we need to move a lot of it, and I need a lot of speed in order to do that. 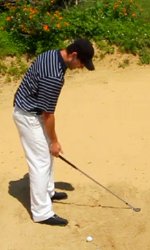 The more speed I have, obviously the farther the ball wants to go. In order to counteract all that speed that I need for spin and to get the ball out of the sand, because the sand is heavy, I need loft. My 60 degree, even though it has a lot of loft - it's the most lofted club I carry in my bag - I need even more loft in order to hit the shot the way that I want to.

Obviously, you can't touch the sand when you're playing, but for practice lay the back of the club in the sand so that you leave an imprint in the sand. Now I have 90 degrees of loft if I make some other setup adjustments.

The second thing I'm going to do is I need to lower the shaft angel at address. What I mean by that is if you look down the line, if my shaft is very upright it's going to have more loft, versus as I lay it down. Now as I lay it down, the club can rest on the heel. It can open the face up even more and that gives me even more loft. 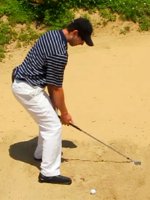 Squat to lower it even more

How do I do that? As I set up, I'm going to lower my hands by lowering my seat. I'm going to squat down a little bit. As I squat down that allows me to get the shaft very, very low. Now I actually have negative loft. That's when we're getting a little extreme with it on certain bunker shots.

Instead of standing really close and upright, I stand a little farther away, squat down, that lets me lower my hands a little bit, and now I've got all the loft in the world, which means I can be aggressive. I can take a wipe at this ball and get a lot of spin and a lot of loft and get it to stop very quickly.

That's the first key to setup.

Now what we're going to do is we need a drill that's going to help us start understanding how much sand we need to take, and that's really simple. I've got a fun drill for this. Call it the Box Drill. 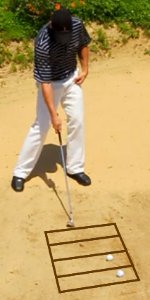 Draw boxes in the sand

All I'm going to do is draw a box - or several boxes - in the sand, that are about the width of my foot. I wear a size 10. You can get the idea; it's close enough. It's just a little bit smaller than my shoe size.

What this is going to do is give me an entrance point and an exit point for my club, so I know how much of a divot I need to take. If I swing correctly, my club is going to enter on this line and exit about on that line. The ball is going to be sitting a couple inches in front of that line, somewhere in the middle of that box.

Again, we're not going to strike the ball. We're going to enter the sand behind it, and exit in front of it. In order to do that, I've got to have an open stance. Obviously, as I squat down and lower my shaft, I've got an open stance as well, and the ball is going to be very, very far up in my stance.

Most amateurs never put the ball up nearly far enough in their setup. I've got the ball the equivalent of off my left instep, with my open stance. The middle of this box is about the left instep. 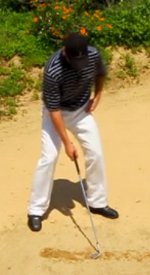 Club sits on back of face

Now, as you look at it from the camera angle, it's almost going to look like, because I have an open stance, even though I'm going to hit the ball that way, that the shaft looks like it's leaning back behind it. That's a good thing because the last, most important part of a bunker shot is I need to use the bounce of the club.

That's this trailing edge. This is called the bounce. The angle that this hangs down beneath the leading edge is the bounce angle. The more you use the bounce, the less the club's going to dig into the sand. That allows you to come through the sand very shallow and get a little bit closer to the ball so there's less sand between the face and the ball. That allows you to put more spin on it.

As I use the bounce, that's going to allow me to come through the sand really shallow and not worry about digging and chunking the shot. That's why it looks like the shaft's a little far back. It doesn't look like I'm leading here because that's going to lead with the leading edge and I'm just going to chunk the club in the sand. I want it to be sitting on the back of the face to have maximum bounce.

Drill in each box, then hit the ball the same way

What I'm going to do now is I'm just going to go through this drill, take my swing...you'll notice it had a nice thump sound to it. That's because I'm hitting the sand with the back of the face. My divot entered on that box, exited on that box. That was good.

As you practice this Box Drill, this is going to help you get the ball out of the sand and get you less fixated on the golf ball. What you need to be really concerned about is taking out perfect divots as you go down this line. The more consistent your divots get, the more consistent bunker player you're going to become.

Work on my Box Drill, the setup cues I gave you, remember that you need loft, speed, and you need to take out some sand because we need to put a lot of spin on the ball, and you'll never worry about hitting a bunker shot again. It's a very simple shot. Practice my Box Drill and watch your bunker shots improve dramatically.

Get Your Free Membership to Watch "How to a Hit Sand Shot Like a Pro" Right Now!