A critical concept in the one plane swing that many golfers have failed to fully understand while learning the swing is the concept of swinging left. It is important that the body control the club throughout the swing in order to take more control out of the smaller muscles of the arms and hands.

By checking your divots and using a simple golf tee, you can quickly groove the proper feeling of rotation in the swing and immediately improve your ball striking. During the video, pay close attention to how the club works immediately to the inside after impact in a natural arc around my body. My arms and hands do not manipulate the path of the club, it simply swings in an arc and sends the turf from my divot to the left of the target line.

Note the following three pictures taken from the video segment. If you look closely you will note how the path of my club is more on top of the ball one frame before impact.

At impact, it is of course square. The important thing to note is the following frame of film where you can see the club has already moved immediately to the inside and is heading over the tee to the left of the shaft. 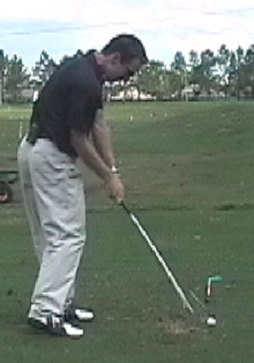 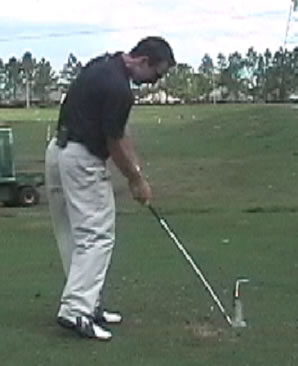 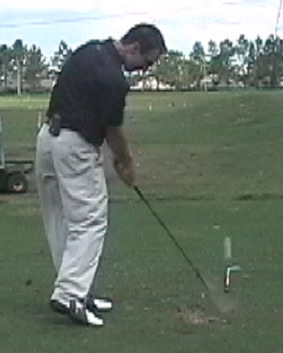 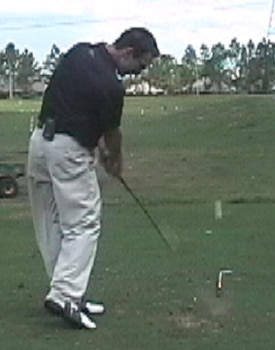 One of the important concepts in the one plane swing is this concept - and you've heard me say it a million times - of swinging left. Always be rotating to the left. 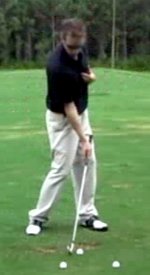 What does that mean, exactly? What are things that you can check to make sure you're doing that properly in the swing and understanding the swing correctly?

That's definitely misinterpreting the idea of swinging left. When we're saying "swinging left," what we mean is that through impact our bodies are actually open to the target. My hips and my shoulders are open and I'm rotating to the left.

You can watch, if you look down the line, you can see that the club, as it comes into impact - this is my target line, so I'm going straight down this shaft - my club immediately works back to the inside. It never comes out to the right. 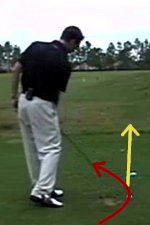 If I was swinging more down the line, it would look more that I was coming into impact square and the club would be traveling along that line as long as possible. In order to do that, my body would essentially have to stop rotating so that my arms could release and extend down the target line as much as they can.

You've heard people talk about "shaking hands with the target." Well, some of them will exaggerate it and actually try to get you to extend the club down the target line as long as you can when actually, in a one plane swing, what you're trying to do is actually get the club to work back left, or to the inside, very quickly, and it's something that happens very naturally if you let it.

As we're looking at this swing, as I swing back to the top and I've rotated here, all I want to do is unwind my body - my entire core - back to the left so that as I come through and my arms stay passive, all I'm doing is striking the ball and then immediately moving back to the inside because my body keeps turning. 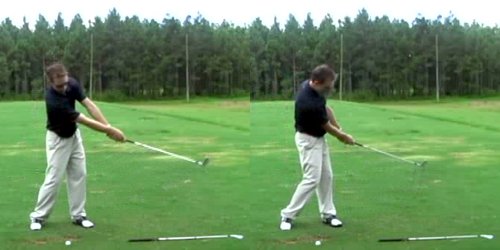 My body never stops turning in the one plane swing. If you ever see my body stop, and I release with my arms and hands, you know that it's going to be a bad shot because my arms are in complete control of the club head at that point, so I have no ability to square the club with my body. I'm completely reliant on timing and tempo to get the club face square, and it's a chance of whether or not I can do that consistently.

In a one plane swing we're trying to take that timing and tempo, and all those things, out of the swing so they're not quite as critical, to the point where I rely on them - if my timing's off that day I hit bad shots, if my timing's on I hit great shots. We want to be a little bit more consistent than that, obviously. 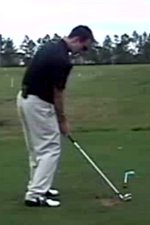 All we're trying to do is square the club face. If you look at the club it's coming square, square - as long as I do nothing with my arms and hands and I keep this relationship exactly the same as it is at the top of the swing, and I come through and I rotate my body left, keep turning left - the club face comes into impact square.

I've done nothing to manipulate it with my arms and hands. Then it works back to the left and to the inside. That's just allowing my body to keep turning, driving through the shot, swinging left and getting the ball to come out straight because I'm not releasing my hands.

Now, if I take this concept of swinging left and I get my body to rotate very aggressively through impact and everything's working great there - you can see that my body's just turning to the left, the club's working left - and I release my arms and hands, then you're going to see that the toe of the club is naturally going to turn over.

The club head is actually getting out in front of my hands here, in front of my body turn, more importantly, and shutting through impact, rather than staying square and being squared with my body.

What that's going to cause is shots to go left. It's very, very important that you keep these arms and hands quiet and rotate everything square with your body, and release your body through the shot.

A lot of times what I'll tell students is they actually feel like they're going to hit this ball dead left. At the facility I teach at, there's a fence over to the left and I always tell them, "Try and hit the ball over the fence" with their body. 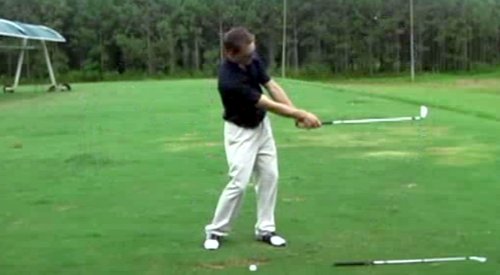 The toe of the club turns over

That's exactly what I mean by this, is that you're rotating, driving the shoulder down and through the shot and, with your body, aiming it out to the left through impact of where you're actually going.

It's a strange concept at first. People either feel like, "Gosh, I'm going to hit this ball dead left" - and if you release your arms and hands you will - or they feel like, "I'm going to slice the heck out of it," because they feel like they're coming over the top when in fact they're actually, for the first time, rotating level on plane rather than dipping their shoulders coming through.

I have two main checks for this that I want to work with you on. One is just to simply take a tee and place it a little bit more than a foot in front of the shot and just a few inches to the inside of the target line.

You can see here's my target line. My tee is about 3-4" inside of that, and a foot and a half to two feet in front of the ball. 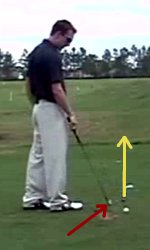 All I'm looking to do here, as I come through impact, is to try and clip that tee with my club. It's not critical that you actually clip the tee. It's a visual; you're trying to get a sensation or a feeling of the body having to rotate very aggressively to the left while the arms stay more passive in order to get that tee to clip and take it out of the ground.

As you're working on these shots, this is a great, simple drill to simply get the sensation of working your body, rotating everything left, and getting the club to swing along that path.

Another simple check, and you can do this at the same time, is paying attention to where your divots go. You can see I have my shaft here delineating where my target is, my target line. As I make practice swings, I actually want my divots - if I stand back here and do it - I want my divots to fly to the left of that shaft.

You can see, if you look down the line here, that my divots are starting out just to the left and working inside the shaft there.

When I make my actual swings, I'm wanting the same thing to happen. I'm wanting my divot to fly left of this shaft, definitely not to the right of it. Coming in straight or slightly to the inside is ideal, and the more left that you can move it and make solid contact and keep your arms passive, the better off your swing is going to be.

We'll hit this shot here, and we'll watch. I'll imagine I'm going to clip the tee, and I'm going to swing and get my divot to go inside that shaft. I'm going to think of nothing else. We'll work on this and see what happens.

I'm looking down my target line. 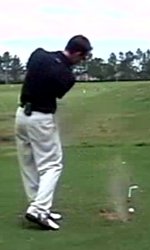 My divot went left, the ball started out on the target line, I swung to the left. If I release my arms and hands, the ball will come out just a little bit left, and if I keep everything passive, the ball starts out on line.

That's what we're looking for, is for these divots to start to work to the left. As you're making practice swings just get those divots flying to the left here. Imagine that you're trying to clip this tee, but again you don't want to be releasing your arms and hands like this because then you're going to actually shut the club face down.

You're wanting to rotate through the shot, and that is what is getting you the compressed ball flight because you're actually hitting the ball more with your torso then, and getting the club to continue to accelerate through impact, because it's not released out.

As soon as you release the club out, away from you, it begins to slow down because you can't accelerate it anymore because you lose the arc.

Work on getting your divots to fly left, and the tee in the ground, to clip the tee just in front of you; just as a visual, to kind of feel that you're rotating to the left, and watch your ball flight and impact improve.