We talk a lot about the importance of rotating your shoulders perpendicular to your spine. The Slide the Shaft Drill will help you learn that movement.

This drill is best performed with two people, but there's also a way to do it on your own if you're practicing at home or out on the range and don't have somebody to stand there holding a shaft on plane for you.

Connect the shafts and stick them in the ground so they lean perpendicular to your spine angle at address. A third shaft will give you the full length of the backswing, but two is enough if that's all you have. 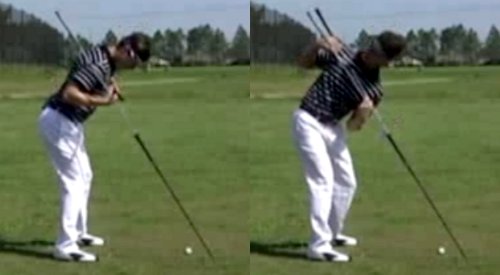 Set up the shafts about 90° to your spine angle (left), then rotate back (right)

Once you've set up your shaft plane, stand a little bit away from it and hold a club against your shoulders with the butt end of the club pointing out at the plane. As you turn back to rotate the club at your shoulders, it should be parallel to the shaft plane at the top.

Here's the important part. Set into your left side and begin to turn back down. On the way down slide the butt of the club down the shaft plane as far as possible as your right shoulder works down, out, and through the shot.

Again, align the club at the top then rotate through, focusing on keeping your shoulders - particularly the right shoulder - working down on plane and level to your spine. 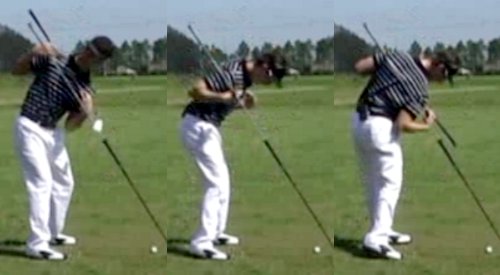 Getting to the top in the backswing is easy, but when it's time to unwind back to the left, most golfers rotate their shoulders too level, standing up out of their spine angle and allowing the right shoulder to work up and out instead of down.

That causes the golfer to come out of the shot and block it to the right or flip it. 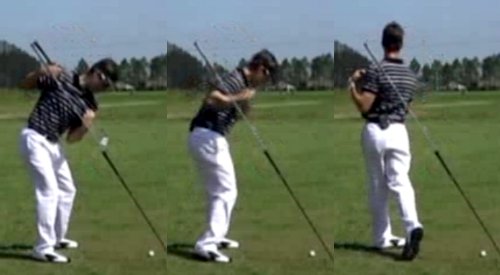 Shoulders rotating too level - this is incorrect

The other tendency is to go to the top and then get underneath the plane and slide the hips. In this case the shoulders tilt back, slide underneath the shaft, and end up stuck.

The body gets into a stuck position because the spine is kinked and you can't rotate any more, so you're left in a bad position.

Avoid both of those mistakes. You want your shoulders to rotate back and through, remaining perpendicular to your spine.

Your right shoulder should be working down, out, into the ball, and through the shot. 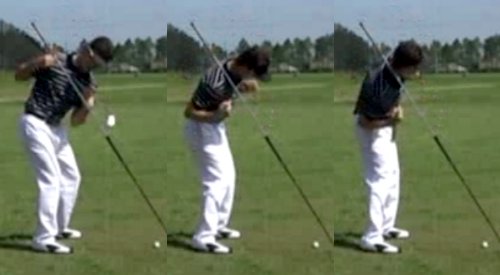 Rotating under the plane is another common mistake

Once you're past impact and your shoulder continues to turn around, your spine can start to straighten up a little bit. You don't need to kill your back, trying to hold that spine angle all day.

It's very important that you learn to turn back and through on the same plane, rather swinging off in either direction - coming out really flat or going in and tilting your shoulders on the way back. We see a lot of golfers make both of those mistakes.

Work with this drill. If you have three shafts it's a little easier to get the proper plane angle, but you can get very close with just two. Or try one of the variations:

Any of these variations will give you more or less the same effect. However you choose to do it, it's very important that you work on this drill.

No one's ever going to rotate exactly perpendicular. There are always fluctuations because of all the dynamic forces going on in the golf swing, but you have to be able to rotate relatively on plane.

If you learn to avoid both of these extremes and just keep your shoulders 90° to your spine, your shots will come through a lot more consistently. 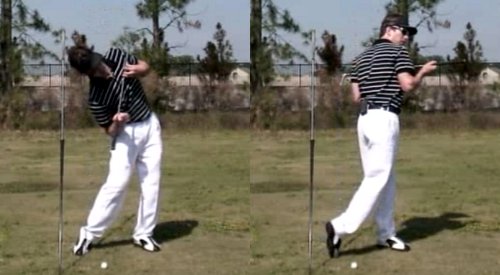 Rotating under the plane is another common mistake

This will allow your arms to work properly. If you tilt way back your arms are forced to come too much from the inside, and you will block or flip. If you come around too level, you're going to tend to throw your arms out over the plane.

Just swing through on a reasonably good plane and you'll hit reasonably good golf shots consistently. It's important to get your shoulders working properly, because when your body works correctly in the swing you can take a lot of the compensations out of your arms.

Work on this drill. It's the same motion we always talk about - rotating back, keeping your shoulders level to your spine. You've done it hundreds of times standing up straight. Now you're just doing the same thing with some spine tilt.

See if your shots don't improve. You'll feel a lot more strike with the body through the shot, rather than just flipping at it with your arms and hands.

Watch the Pros Do It

Now that you know how to do the drill, we'll take a look at some professional golfers' swings to see the move in action.

If there's one thing all the pros do really well, its the fundamentals of the golf swing! 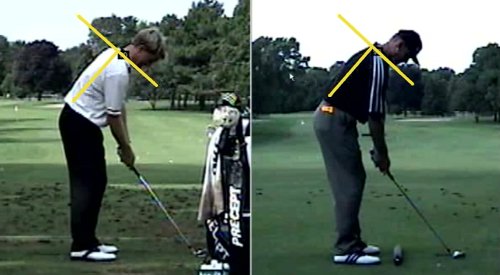 Today we're going to look at Stuart Appleby and Ernie Els. We've drawn a couple of lines at about 90° to each golfer's spine angle so we can see what it looks like to rotate the shoulders perpendicular to the spine, not just in a drill but in the real world. 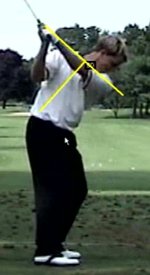 Stuart at the top of the swing

We'll start with Stuart. As the club goes back to the top, we see that his shoulders are very close to being perpendicular to his spine. His arm is actually dead on 90°, while the shoulders aren't quite as steep.

We have you do these drills because the concept of rotating perpendicular to your spine is a fundamental of the golf swing.

It's not that it has to be exactly 90°. It's not a magic number, but of course there is a reason for it.

Biomechanically, your shoulders work properly when they rotate at their natural angle perpendicular to your spine, not kinking your spine by rotating at an odd angle.

That's exactly what the professional golfers do so well. 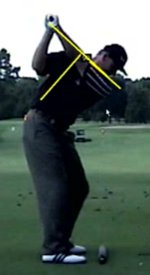 Ernie at the top of the swing

Learning and adopting the most efficient movements, both mechanically and biomechanically, allows them to play all the time and compete at the highest levels without injuring their backs.

Of course some of them do develop back problems, and you can see it in their swings.

Looking at Ernie's swing we see that his arms get a little steeper than Stuart's as he goes back, but he's still pretty close to that line, and his shoulders are even closer.

He's also maintained his spine angle. Both of these golfers maintained their spine angles very well, while rotating their shoulders 90° to it.

As Stuart comes down we see his right shoulder dip below the plane. You might find this unexpected after everything we've talked about, but it's actually a common trait found in almost every professional golfer. It's completely normal. 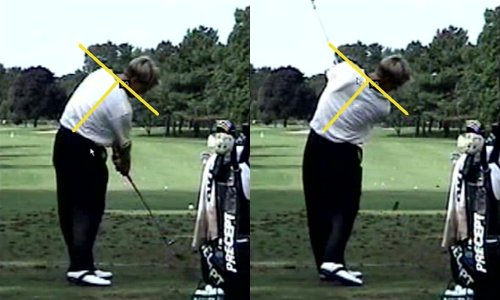 Stuart Appleby through impact (left) and swinging through (right)

There are a lot of dynamic forces going on in the golf swing, so while you definitely want to feel that your shoulders are rotating level to your spine, in fact most golfers do come in slightly beneath that plane on the way through into impact.

You may actually do the same, but it will still feel as though you're rotating on that 90° plane. Then your shoulders get back up on that line as you come through.

Stuart's shoulders are actually a touch steeper than they were on the way back, just slightly. Again, this is very common among professional golfers. 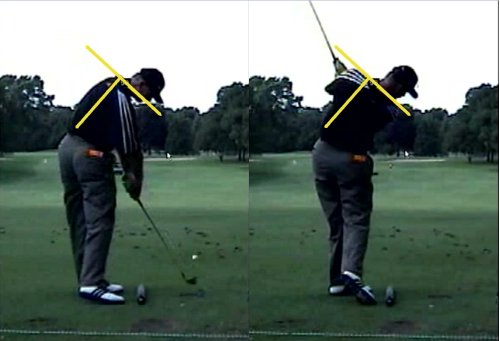 Ernie Els through impact (left) and swinging through (right)

We see the same thing in Ernie. His right shoulder comes down a little bit beneath the plane, then as he comes through his shoulders very closely match the line he had on the way back.

We say we want you to rotate on a plane that's perpendicular to your spine, and that's what it should feel like you're doing, even if the dynamics cause fluctuations like these in your actual golf swing.

Take it from the pros and strive to keep your shoulders level through the golf swing.