Rotary Golf Swing Rotation Through the Ball - Side by Side Comparison

While it's nice to watch examples of perfect swings, it can be more useful to look at swings where things go wrong so you can see what happens when something's a little off. That can make it easier to see common tendencies and what causes misses for the average golfer.

We talk about rotation all the time. When we say "rotation," we mean rotation of everything - the entire body - back and through.

We're going to talk about it again today, using a student from an online lesson to help illustrate what happens and what it looks like when you don't rotate enough through the shot. 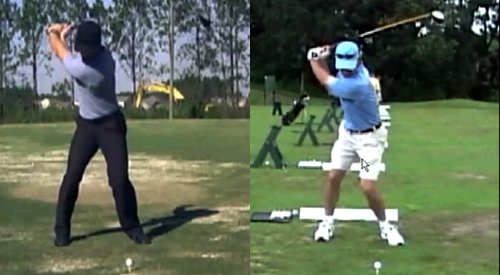 Compare Chuck's swing at the top (left) and the student's (right)

The student in our examples today is a very good golfer, but he has an issue with flipping and rotation, which are closely related to each other. We'll be comparing his swing to one of Chuck's.

The first thing we see as the two golfers get to the tops of their swings in the photo above is that the student, on the right, doesn't quite complete his turn.

He's very, very close, but as he got to the top he stopped his shoulder turn and just kind of finished the swing with his arms. He doesn't quite get the body rotation driving the swing back.

In Chuck's swing, meanwhile, the shoulders continue to turn fully to the top. From there, all he has to do is unwind. 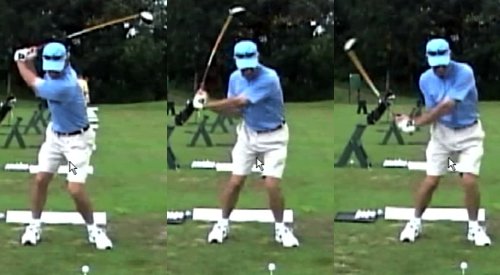 The student starts his downswing

Everything we do in the setup and the takeaway - the backswing plane, the rotation of the club face, etc. - is setting us up in a position that allows us to rotate freely from the top.

We're just looking to get as free and thoughtless on the way down as we possibly can. We want things to be as automatic as possible. That's the purpose of the whole setup, takeaway, and backswing. 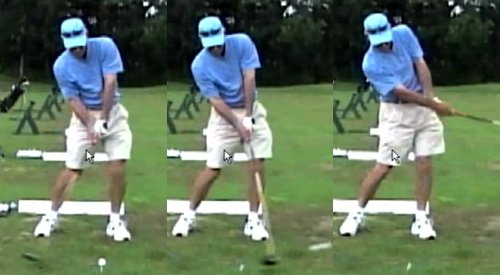 The student swings through impact

As the student takes the club down we can see that he starts to unwind everything pretty early, but his lower body doesn't do a whole lot. The hips are pretty quiet. They're definitely unwinding, but they're a little quiet.

He comes into a fairly good impact position, but you'll notice that his left wrist breaks down pretty quickly after that and he kind of gets a little flippy with his hands. More importantly, we see that the lower body slows down and almost completely stops turning through impact.

It can be hard to see some of these things when you're looking at just one swing. That's why we like to compare two swings, side by side. 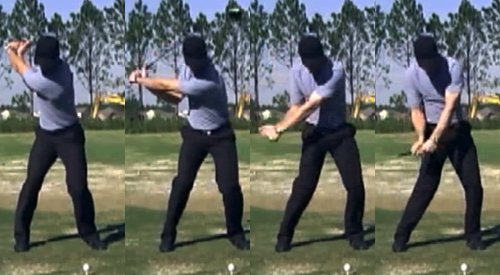 As he continues to come down, notice that his hips have opened up to the target by the time he approaches impact.

From the top down to the final frame, the hips have turned a great deal and the shoulders have turned just as aggressively, keeping up with the hips. By impact, the belt buckle is actually facing towards the target.

Looking back up at the student's swing, we see he started to turn and he got his belt buckle back to about its address position, but then he didn't really turn much more after that.

The belt buckle does continue to turn a little bit, but by the time he's at impact it's just barely past where it was at address. Meanwhile, as Chuck comes into impact his hips and belt buckle are facing almost completely toward the target. 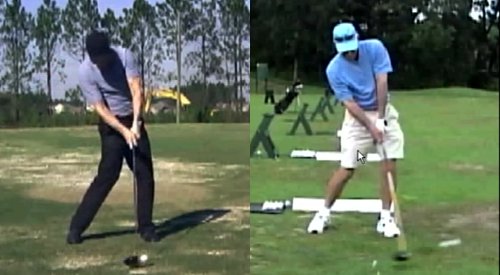 You'll also notice that Chuck's hands, club, and club head form a straight line at impact, while the student's club is starting to pass his hands.

In order to prevent this flipping motion, one thing we're having him do is work on using his whole body - particularly his lower body - much more aggressively to rotate through the ball. It's very important that he continues to rotate.

Remember your ABTs: Always Be Turning!

Compare What Happens After Impact

As both golfers come through impact, notice that Chuck has gotten a full extension, with his hips completely facing the target.

The student's hips have hardly turned at all at the same point in his swing. We're looking at the side of Chuck's body, and the front of the student.

Chuck's legs and hips have really released through. Instead of flipping the club, he's releasing it with his body.

Chuck's club still points at the center of his chest, whereas the student's club points back off behind him. Ideally, both golfers' clubs should be moving with their bodies, pointing at the center of their chests, as shown by the red lines. 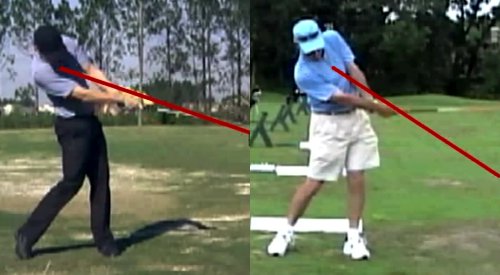 The only way to get to that ideal point is to continue turning through the shot. The club stays in front of the body.

Chuck continues to turn very aggressively. His hips are completely released towards the target in the follow through.

The student's hands are continuing to release. His upper body continues to turn a little bit, but it's not driving the club through.

At similar positions in the follow through, the student's chest is almost facing the target, whereas Chuck's is starting to face left of the target already. The hips are supporting that, and have basically turned as far as they're going to turn. Everything is just releasing through. 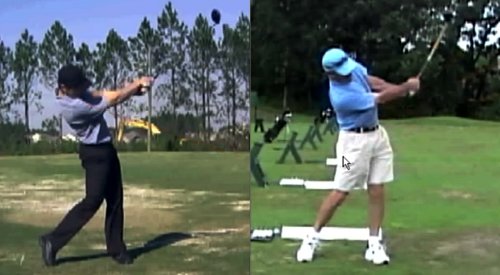 The two finish positions are also very different. The student has a very soft follow through. That's great, but it's largely due to the fact that he doesn't really drive his body through, and just releases more with his hands.

Meanwhile, Chuck's hips have fully turned through and released. Here they're in a very good position, and he got a lot more release out of his lower body, driving everything into impact and through.

Again, Always Be Turning. Hopefully this comparison has helped illustrate that point.

Focus on turning your whole body back and through - not just your shoulders, or a certain part of your chest. Take everything through the ball and you'll see big improvements in your power and your ball striking. 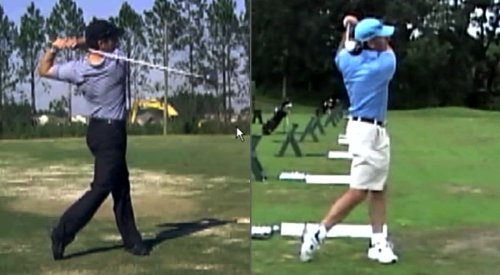