A Student's Swing - The Bump Transition

The concept of the transition has seen a lot of discussion on the Rotary Swing Forums as golfers try to understand what it is and how you time it, what the bump is, etc.

We're going to take a few minutes today to discuss exactly what the bump is by reviewing a student's swing from the Members Vault.

This student posted his swing to the 21+ handicap group, so you'll see a few setup flaws that are causing him some trouble, but for now we're mainly concerned with his transition - or lack thereof - and how the hips work in the golf swing. 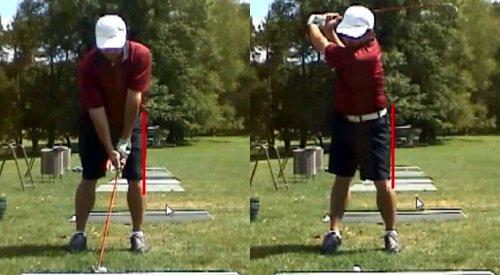 Student at setup (left), and at the top of the backswing (right)

We've drawn a red line on the outside of this golfer's left thigh, to serve as a fixed reference point throughout the swing.

A lot of golfers will hear that and ask what we mean by "using the lower body to take the club back."

There's a lot of misunderstanding and misinformation out there about not rotating your hips going back. A lot of people take that advice and overdo it.

Your lower body absolutely does rotate during the backswing.

There was a point in golf, with whiffier shafts and the like, when you didn't want to put a tremendous amount of stress and load on the shaft, and as a result golfers tended to get a lot of hip rotation going back and through.

These days we have a much better understanding of the mechanics of the swing and how the equipment works, but that doesn't mean that in trying to create X-factor or torque that you don't turn your hips at all. In fact, the opposite is true. You must have hip rotation going back. 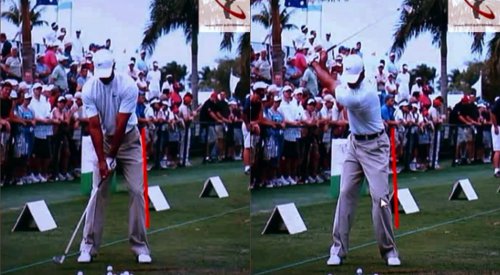 Tiger Woods at setup (left), and at the top of the backswing (right)

We'll take Tiger Woods as an example. Although from the face on view it looks like he doesn't really turn his hips a whole lot, if you look at it from down the line you'll see that the left knee works quite a ways out over his left toe. It's harder to see in this view, but you can still tell there's some rotation going back.

He's really loading up and using his legs and hips to rotate and bring the club back. Think of somebody like Roger Federer or Nadal, loading up for a serve. They really use their legs to load up and get a lot of power, and the golf swing is no different.

It's hard to articulate exactly what golfers see or don't see in their swings, but you can see here that as Tiger starts to load up he gets a lot of torque and load in his lower body.

Here's What Happens When You Don't

We see Tiger making a very athletic move that allows him to use his lower body to load up going back and really unwind it coming down. 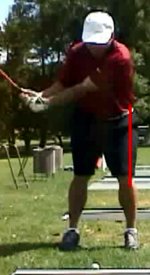 By contrast, our student's swing doesn't show that liveliness or activation in the lower body. It's more like he just turns into his right thigh a little bit.

He's not really loading or getting ready to go back the other way. He turns a little, but he doesn't build up any power or torque. He barely ever gets past the red line we drew at address.

He starts the downswing with his arms, hands, and club, bringing everything down. His hips are moving at about the same speed as his shoulders, so he's not getting any power out of his lower body at all.

By the time he gets to impact, he's broken down a little bit. There are a number of other things we could talk about in the swing, but for now notice that his left leg is almost back to where it was at address. In other words, he missed the bump.

So What is the Bump?

The bump is the transition you make at the top of the downswing to really set into the left side and fire your body through, bringing the club down with your legs. That's what's missing in our student's swing. 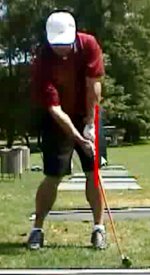 He missed it because he didn't wind up on the way back. He just kind of lackadaisically turned back; he got the club back, but he didn't use his big muscles.

Now as he unwinds of course he's forced to flip the club coming down, as we can see from his impact position.

Let's take a look at that same segment of Tiger's swing.

Tiger gets his left hip past that line immediately, right from the top of the downswing. That's the bump.

It's the aggressive setting into the left side, and it means that by the time he gets into impact the center of his body or his belt buckle is out on that hip line.

Our student, meanwhile, is much farther back behind the line. That's part of the reason he's flipping and doesn't have any shaft lean - his body is too far behind at impact.

Most importantly, Tiger gets forward into that position very early. By the time his hands are in front of his right leg, the center of his mass is already set onto that line, while our student never has a chance to get there. He's just trying to continue to turn through. 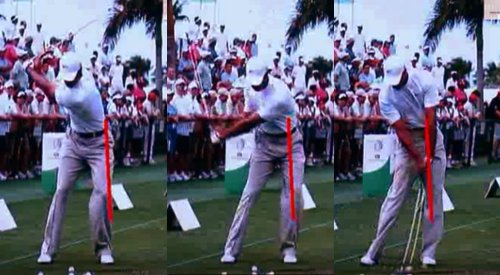 Tiger's "bump" move, setting into the left side at the top

There does have to be some lateral movement in the swing, and our student is not really getting any. One way we can tell this is because his right foot starts to spin out and actually work back behind him.

If your right foot works backwards it means you're not getting enough lateral transition onto your left side to allow your legs to bring the club down. 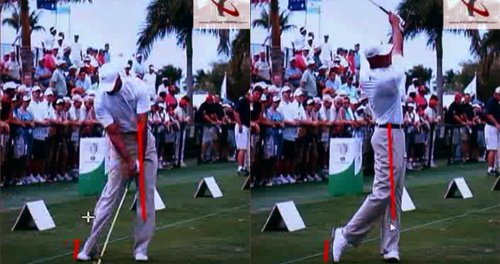 Checking the same thing in Tiger's swing, we see of course that his foot never breaks that line.

His right heel comes straight up on the line as he sets aggressively into the left side and continues to turn and drive through. This shows that he got a good transition early enough in the downswing to allow his hips to continue to rotate and drive through.

The line we drew on his left hip at address now runs down the center of his body, hip, and leg. He's delicately balanced on the tip of his right toe, showing that he no longer has any weight on the right side at all.

Our student, meanwhile, never got fully onto his left side. His right shoe is bent, showing that he's still bearing weight on his right foot at the end of the swing because he missed the transition and never got off the right side. 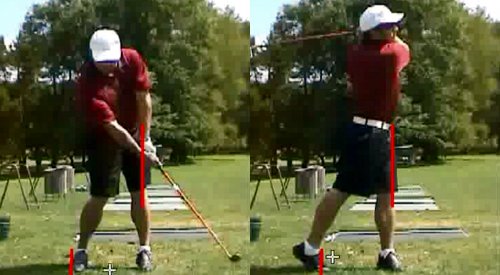 This is very common among higher handicap golfers; they don't get loaded up going back, so they can't drive and fire through on the way down. They tend to over-power it with their upper body, while the whole lower part of the body is taken out of the equation.

That's why, when you compare that to somebody like Tiger Woods, his lower body doesn't look very powerful at all. He's not using his body to make sure he really gets off that right side onto the left, as you can see Tiger does.

Right from the beginning, you'll notice that he's loading up, really getting some load and spring into those legs, driving very hard, getting onto that left side.

By now a lot of people are thinking, "I thought there was no lateral motion. Isn't this a slide?"

A slide would be if he continued to move his hips out as the club approached impact, but he stops moving laterally long before impact.

As you can see in the final photo, his hips stop moving laterally before his hands even reach his right thigh. If we draw another line there we can see that he never moves past that line.

A slide would be if he continued moving his hips out past that point into impact, and ended up coming too far from the inside. 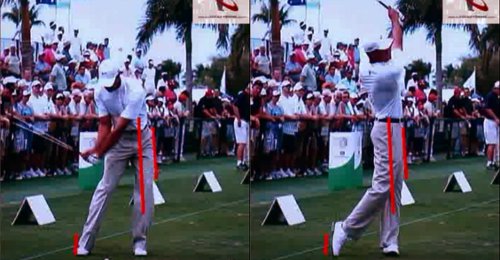 His movement here is the bump and the transition, and it does involve lateral movement, as you can see from the lines we drew at address.

Your legs must drive that first part of the downswing in order to get everything to sync up properly and get maximum power with minimum effort.

Hopefully this will clear up some of your questions about the transition and the bump we mentioned in the book.

If you're not getting fully onto your left side work on your transition, get that bump, and you'll have a lot more power with a lot less effort in your swing.

Get Your Free Membership to Watch "Weight Shift Part 3 - To the Left" Right Now!