We've talked about the takeaway a lot on the website, and we have a video about working the arms up and back behind you, and getting some flow to get the swing started. 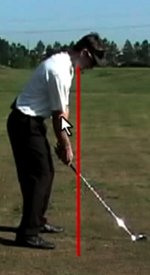 The chin line at address

However, we still see a lot of golfers struggling with the takeaway, often with a tendency to get the club too far inside and the hands outside.

We like to say, "Hands inside, club head outside," but what does that mean, exactly? A lot of people seem to find it confusing, so that's what we're going to look at today.

We'll start with a look at Chuck's setup position, and a line drawn straight down from his chin.

In a good Rotary Swing setup, your arms hang more or less directly below your shoulders. Of course there's a slight angle to them, but with a midiron they shouldn't stick out past the chin line.

That will change with the driver and the longer clubs. The arms will get out a lot farther as the lie angle decreases and the club shafts get longer, but they should definitely be inside that chin line with the midiron - Chuck has a 6 iron in these photos.

The Arms Never Break That Line

We're looking at the takeaway, so of course the next important piece is how the club works back from here. 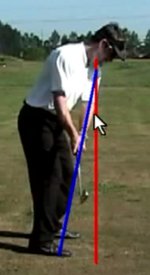 The arms should never break the chin line. This is really important.

Taking Chuck's swing back to where the club is parallel to the ground (it looks like it's below parallel, but that's just the camera angle) we see that the arms never break that plane. Even the left arm stays inside the chin line.

This creates the perfect takeaway angle. As the left arm works back it's angled away from that plane line, in toward the ball of the right foot. This is ideal.

This is a simple takeaway, driven by the body, the core, and everything turning back in sync. The arms and hands are not doing anything too aggressive. Of course, passive arms doesn't mean that they just hang limp. 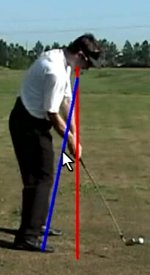 Back on the chin line coming into impact

The arms do have to swing up and around, and the club has to set. All those things have to happen, but we don't want to overdo any of that and have it end up as the star of the show.

If you rotate correctly, you should find your arms working right back on that line and never getting outside of it.

The same is true as you come down. You get right back on that line and come down into impact.

The main thing is that if the takeaway starts out correctly, you have a good chance of getting the rest of the swing to work correctly.

When you watch your swing on video, draw that line straight down from your chin and make sure your arm never gets beyond that line. That's important.

Look at a Student Example

We see a lot of students whose left arms do go well outside that line. We'll take a look at one student's swing here, so you can see what we're talking about and watch for it in your own golf swing. 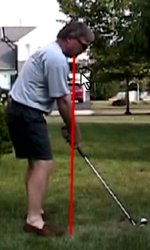 We'll draw the same red line on this golfer's setup. The first thing you can see is that the hands are already outside of that line, before the swing even starts.

This will create a tendency for the arms to want to swing very flat. When that happens, of course the club head will go to the inside while the hands go to the outside.

As the club works back we see that the left arm works well outside of the chin line very early in the swing.

When the arm works out away from the body instead of in around it like that, the club head is forced inside. He's not able to get the club up on plane.

As his arm works outside the line, the club head gets way to the inside. By the time the club is parallel to the ground the club head is way behind the body. This is a very common mistake in the takeaway and it starts at setup.

The arms are angled out too far at setup. Ideally he would be tilted over a bit more, but he's close enough. If he just gets his arms hanging down then he'll be able to stay inside that line. 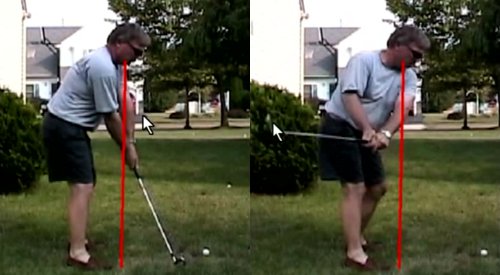 Check Your Own Swing

When the hands go outside the chin line, the club head is going to go inside, and you want just the opposite.

You want the hands inside the chin line and the club head more outside.

That's the combination you're looking for, and this is the mistake to avoid. The best way to work on this is to take some video and go ahead and draw that line straight down from your chin. See if your arm is breaking that line at setup, and through takeaway.

If so, fix it and you'll have a much better takeaway, which will give you a much more consistent shot pattern and a much better chance at making solid contact, each and every swing.