Wrist set is one of the most important aspects of the golf swing, and one that's not discussed very often, especially in the Rotary Swing where you're swinging the club more around your body, not trying to get it set up.

It's important to keep wrist set under control in the one plane swing - in fact, up to a point, less wrist set is better in any golf swing, as long as you don't go to the other extreme.

Today we're going to discuss how much wrist set you need to get from address to the top of your swing. 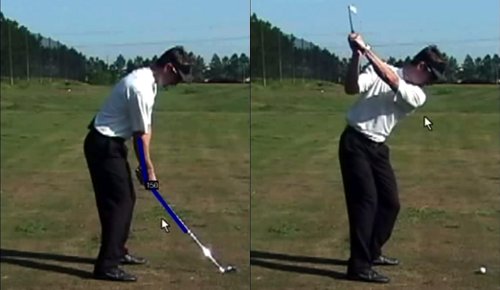 You start out the swing with a preset wrist angle between your forearm and the shaft. The club doesn't form a straight line with your forearm, so there's obviously some angle there. The amount of wrist set you get is simply the difference between this initial angle and the angle you get at the top of your swing.

Chuck's wrists are fully set at the top and he's ready to go back the other way, but you can still see the shaft of his club from down the line.

Golfers learning a Rotary Swing almost never stop at this position at the top - but they should. 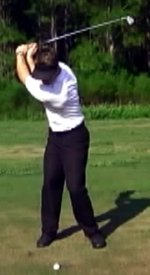 It's simply not necessary to swing that long with a midiron. Even with a driver, you don't want to dip way past parallel because that just increases your dependence on timing the release of the shaft on the way down.

From the face on view, you can see that Chuck's club doesn't approach parallel. There's plenty of room to go, and he's got about a 90° angle between his right forearm and the shaft.

There's a very simple guideline we like to use to help people understand how much wrist set to get:

Your wrist angle should be no more than 45° sharper than it was at address. That's it. You don't need any more wrist set than that.

If you're trying to generate speed with your body as you rotate on the way down and you have a tremendous amount of wrist set, you're going to have a lot of trouble timing the release consistently.

The Release and Why it Matters

We're not going to discuss the release in detail in this lesson, but we will take a quick look.

As Chuck comes back down he does nothing but turn. Watch as he comes through impact: 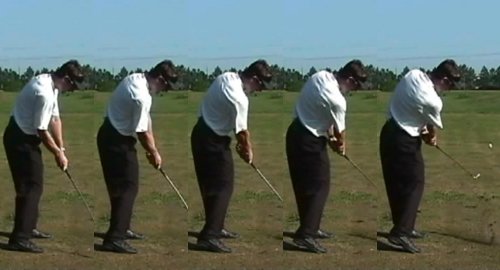 Notice that the angle of the shaft and his right wrist remains constant in each frame. What does this mean?

The Club Turns Along With the Body

You could imagine that Chuck comes into impact with the club pointing more or less at his belly button. As he goes through he just keeps turning his body and the shaft turns right along with him. He's not releasing the club face with his hands.

You don't want to try and depend on timing a release with your hands to hit the ball.

You'll notice that Chuck's club face is very quiet through impact. The angle that's been created with the forearm and the club face remains constant so all he has to do is keep turning his body into impact.

The club face is looking at the ball, and stays square through impact

The club head has also stayed well out in front of Chuck's body rather than being flung around to the inside, which is very, very common. It's still in line with his body. You can still imagine that the shaft is stuck in his belly button through the release.

We see the same thing from the face on view. The angle doesn't change much as he comes down into impact. His torso and everything just turns through. Everything does eventually start to release, but it's a very late release with the arms and the club. The release with the body is the important part. 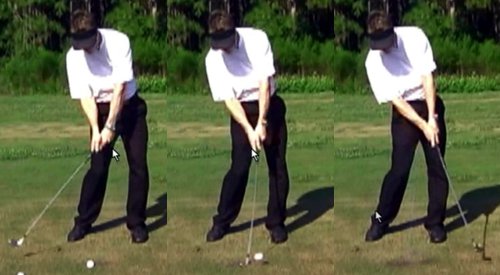 The point of this, in terms of wrist cock, is that if you have a tremendous wrist angle on the way down, at some point you're going to have to stop rotating with your body and flip the club through.

If you have a very sharp wrist angle and turn your body really aggressively through the shot, the club face is going to end up well back behind you.

You would have to slow your body rotation down and release the club into impact with your hands, then continue turning. It's very difficult to do both when your angles are off.

Again, you generally want to get about 45° of wrist cock beyond the angle you have at address. That's all you need for pretty much any club in the bag.

You can get a little more with the driver, but when you start getting into the longer clubs you certainly don't want to get too crazy with the wrist angle.

Just use 45° as a rule of thumb. When you're practicing you'll find that you only actually flex your wrists slightly to get that extra 45° from address to the top of the swing. You don't want to go past that.

Get that down and you'll see your ball striking and consistency improve.