We've talked about the many different kinds of misses in the golf swing, and the different ways golfers miss the ball. A lot of our drills address the basic misses.

Today we're going to talk about what causes the typical pull by comparing a student's swing with one of Chuck's. Many golfers struggle with this - see if the following applies to your own golf swing.

Note: Chuck is set up slightly shut in these photos, so the camera angle is slightly off. The ball is really just on his left ear, even though it looks like it's farther back. In any case, it doesn't affect what we're discussing here. 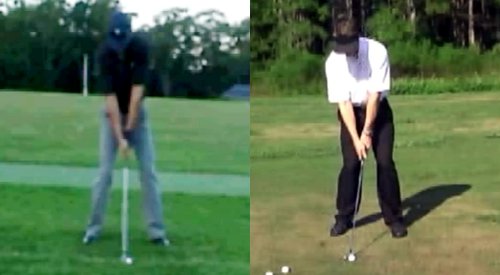 What Do the Hips Do?

Today we're going to look at rotation. We call this the Rotary Swing, but a lot of people misunderstand the role of the hips in this rotation-based golf swing. Do they turn? Do they stay quiet?

As a rule, we do prefer to have most golfers keep their hips quiet - but you shouldn't take that to the extreme and keep them too quiet.

If your hips don't do enough work - if they don't turn at all - you end up coming down steep. The path of the club gets too steep and you swing over the top and pull it. That's what our student has going on in his swing. 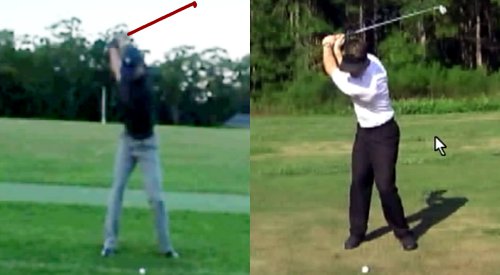 Compare Chuck's position at the top (right) with the student's (left)

As this golfer takes the club back, notice how quiet and braced he keeps his lower body. It looks like a really good golf swing, and if it were a two plane swing it would be. He's made a very good, quiet lower body swing here.

It's dramatically different from Chuck's swing, on the right. Everything starts to turn when Chuck takes the club back, and at the top we can see that he's rotated his hips and his core.

That's why we call it a Rotary Swing; the whole body can turn.

Shallowing Out the Path

You're swinging around in the Rotary Swing, rather than up and down, so there has to be something that shallows it out.

Different golf magazines and instructors teach various ways to stay more centered in the swing, or lunge up out of it, and do all kinds of things to shallow out the swing path.

But if you allow yourself to turn the proper amount on the way back, you don't have to do anything to shallow it out. It happens automatically. 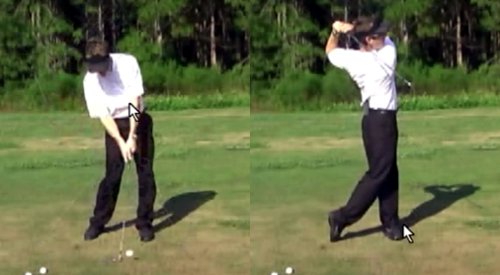 As Chuck comes down into impact everything turns, including his hips and upper body. Everything is driving through. He takes a good divot at impact, shallows it out perfectly, and then releases on around.

He didn't have to lunge out. At the finish he's standing straight up and down on his left side - you could draw a line straight down from his shoulder to his left foot. He doesn't hurt his back, so this simple golf swing can last him a lifetime.

In order to achieve that, he has to allow himself to turn. Again, you don't want to take it to the other extreme and get really sloppy with the lower body. We don't want that either, but there does have to be some rotation.

What Happens if You Don't?

What happens if you get a very stacked and coiled lower body movement, like our student here? We'll draw a line up from the back of the ball to his head as a reference point in his swing.

The first thing we see is that his head is way out in front of the ball by the time he gets into impact. This is going to cause a flip, without fail.

His hands are too far behind, the club head is late, his body is way out in front, and now he's got to flip the club through impact and of course the shot is pulled. 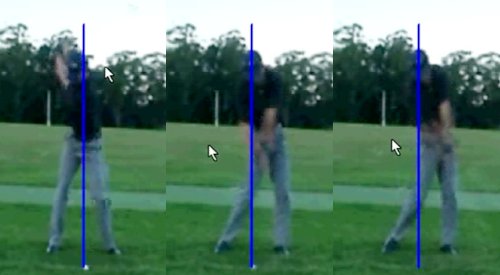 The student at the top (left), impact (center) and after impact (right)

If we could look from down the line, we would see that he's coming down over the top just a little bit because he's not rotating on the way back and through. The rotation is what shallows out the golf swing.

Picture a merry-go-round sitting on the ground. Its horizontal rotation is the ultimate flat plane. Obviously you're not going to swing completely flat in the golf swing - the club has to come up - but rotating around is what helps shallow it out.

That's why it's not necessary to keep your weight completely stacked on your left side and get really, really steep. Chuck has a little bit of spine angle, tilted somewhat away from the target at the top; of course it's a very, very slight amount.

You'll notice that his head stays right on that line as he rotates back and through. Everything is in perfect position there to be able to release the club powerfully through the ball. 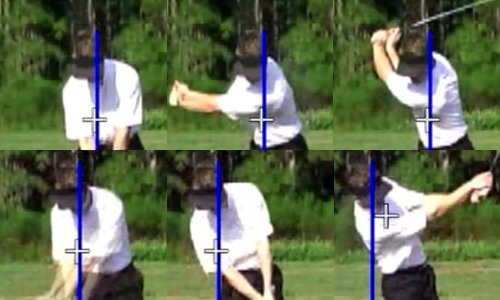 Chuck's head stays on the line throughout the shot

When you stay really coiled, your lower body is going to have to do one thing or the other. It's either going to turn or it's going to slide. Rarely will it do both. If you don't turn on the way back, you're going to end up sliding on the way down. 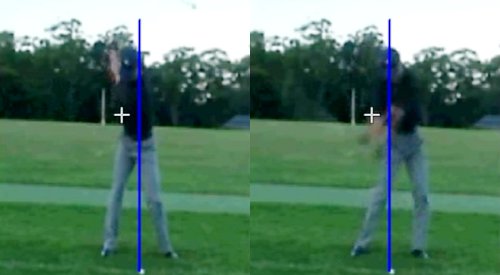 When the lower body doesn't turn, its only option is to slide

You actually see this in almost every professional golfer. They slide in varying amounts, but those who don't turn a lot will tend to have more lateral movement and more upright golf swings.

If you're a Rotary Swinger, you're swinging a little bit flatter, a little bit shallower. You need to rotate on the way back.

You need to understand what's going on there. It's rotation back and through. Everything turns back, then everything turns through, with good rhythm. Like we always say, you unwind smoothly from the top.

If you're pulling shots, check your hips and see what's going on there.