Rotating vs Tilting the Shoulders

As with anything in life, you can overdo a good thing in the golf swing.

One of the great things about the one plane swing is that it doesn't require you to make a massive shift to your right (for a right handed golfer) on the backswing, then a massive shift and slide back to the left. You can stay more centered.

The problem is, people interpret this in different ways, and often end up dipping or tilting their shoulders dramatically on the backswing. They end up hitting very, very bad shots, thinking that they're "staying centered." 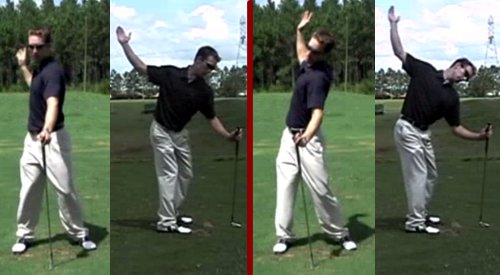 If you do nothing but rotate around your spine, your body will turn and you will stay very centered, as Chuck demonstrates in the pair of photos at left, above. The shoulder plane doesn't change; the shoulders stay level, perpendicular to the spine.

If you tilt instead of turning, as Chuck demonstrates in the photos to the right, your head tilts back, your hips slide out, and your shoulder plane changes. This is incorrect.

The difference is even more dramatic when you get your spine tilt at address and then tilt rather than turn. You can see this in the down the line views above. In the final photo we see that he hasn't actually turned at all. He just dipped his shoulders and lifted his arms to get up on plane. 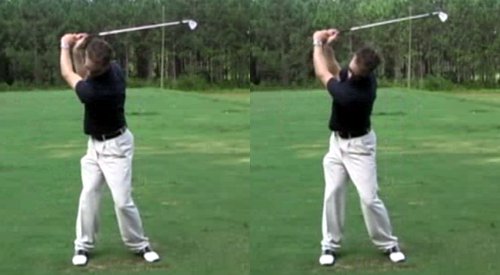 With a golf club in your hands, as Chuck demonstrates at right above, the tilt puts you in a very awkward position. He looks relatively centered - his head hasn't really moved off the target - but he haven't actually turned. He's made a false backswing and a false turn.

What Not to Do 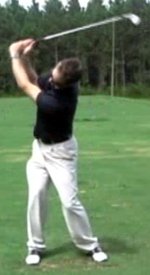 You never want to feel like you're tilting the way Chuck is in the photo at right. That's the worst position ever, because now you have no choice but to try and make a ton of manipulations to achieve a solid impact.

People who tilt like this often end up hitting the ball out to the right, or flipping it left, or they'll come down very steep because their shoulders are on such a steep arc.

They try to stay centered through impact and they end up just coming down and chopping on top of the ball.

It's critical that you understand rotation. This is a rotational golf swing, and you have to understand how to turn on the backswing and still stay centered.

Rather than feeling like you have to twist your whole body around in order to keep your head stuck in place, you have to learn to turn and rotate back around your spine.

There's a good analogy, but we try to use it very cautiously because it can also be misinterpreted. It's the idea of starting a lawnmower. 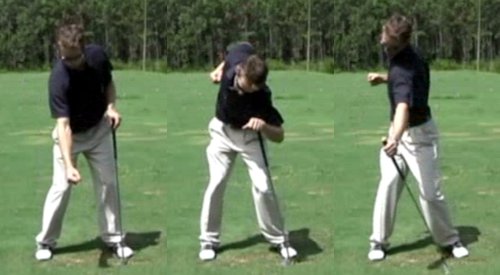 If you were starting a lawnmower with a pull cord, you wouldn't just pull your arm straight back - you'd get no leverage. That's what you're doing in the golf swing when you tilt your shoulders and just rip your arm back without turning.

Instead, you use your whole body to pull that cord back. You would rotate your core, your hips, your chest, your shoulders, and everything to get some power going back.

Done correctly, it's a great analogy for getting your body to turn in the golf swing rather than dipping and trying to "start the lawnmower" with just your arm. 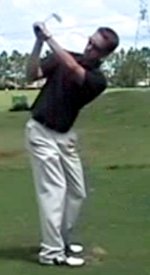 Rotate the body back

If you're comfortable with the lawnmower analogy and you don't have a lot of trouble keeping your arms a bit more passive, you can use this concept in your swing.

Start it like a lawnmower to get your body turning properly, rather than tilting.

When you start your swing, imagine pulling a lawnmower cord. Use your whole body, pulling your arms and turning your body to move the club back and get your shoulders and everything turning correctly, rather than tilting.

This will get the club working back and up correctly on plane, rather than dipping and lifting.

Practice this move in a mirror. See how different it looks when your body and your shoulders turn instead of tilting, and watch your ball striking improve.