Learn How YOU Can Develop Tiger Woods Swing!

Tiger Woods' golf swing has literally inspired millions of golfers, who would've never otherwise learned to play the game, to pick up a golf club for the first time.

During the past 13 years that he has been on the PGA Tour, thousands of golf instructors tried to teach their students to swing like Tiger Woods, typically with poor results.

The effort is understandable, though. Why wouldn't anyone want to copy one of the greatest golfers of all time?

The problem is that building a sound golf swing, any golf swing for that matter, takes a great deal of work. But even with countless hours on the range, golfers have failed at creating a swing that even remotely resembles Woods'. So, how was I able to succeed?

While I've spent literally thousands of hours studying the mechanics and physics of what makes Tiger's swing click, that's only half the battle. I've spent equally that amount of time learning exactly how the brain learns new movement patterns.

At the end of the day, that's all the golf swing is - a sequenced movement pattern that has been ingrained through repetition. Understanding the process of how the brain builds new pathways and building a learning system around these principles is what allowed me to build the golf swing you see on this page and led to the development of my training and swing methodology - the Rotary Swing Tour, or RST for short.

It didn't happen overnight; that's simply not possible, and anyone that promises otherwise is either a fool or trying to sell you something.

It takes hard work, but more importantly it takes focused hard work on the RIGHT THINGS that will allow you to finally build the golf swing of your dreams.

Utilizing the RST learning system based on Dan Coyle's book, The Talent Code, I built a golf swing that you can compare frame by frame that matches Tiger position for position. You can learn this exact same swing following my online step-by-step system, just like the thousands of other members going through the system right now.

For once in your life, make dramatic, visible changes to your swing and build a golf swing like, arguably, the greatest golfer to ever live.

Now, most golf instructors out there would like you to believe that you can make permanent changes to your golf swing in only 30 minutes or over a weekend.

If you believe that nonsense, then the RST program is not for you. RST is NOT for those who succumb to the "5 Minute Abs" infomercials and think they're going to look like the models on TV after just a few minutes with they product or system.

Tiger didn't build his swing in a weekend. As a resident of Windermere, FL, who often plays and practices at Isleworth, I've seen first hand just how hard Tiger Woods works at his swing.

If you're up for the challenge, then RST and the perfect golf swing will be your reward.

Why Does My Golf Swing Look Like Tiger Woods'? 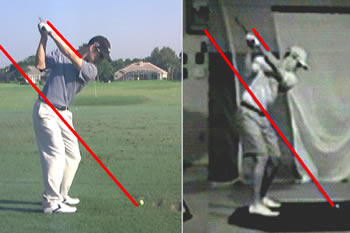 Here, you can see how closely I mirror Tiger's top of swing position.

This would seem to be a simple question with a simple answer — I tried to copy him, right? Not exactly.

You see, the Rotary Swing Tour is NOT actually based on Tiger's swing at all. The RST is based on a set of objective, unbiased fundamentals for the golf swing based on science, not preference or any Tour Pro.

Armed with undeniable fact and understanding about the golf swing, I've been able to recreate Tiger's body movements in my own golf swing because they are based around the laws of anatomy and biomechanics regarding how the body is designed to create rotation around the spine (i.e., the name Rotary Swing).

The fact that my swing looks like Tiger's is simply due to the fact that he moves more efficiently than anyone else that you've seen. His swing follows the principles of RST just as mine does, and because of that, our swings look almost identical.

There are variables of the swing that are discussed in detail in the videos on this site, but the core body movements and how we generate power and are able to do so safely with minimal effort is the focus of this discussion.

I've been studying golf swing mechanics and physics since 1990. (OK, study is a light term; obsessive dissection is probably more accurate.) Over all those years of working under and with different instructors and my stint playing professionally, I learned one valuable thing — most golf instructors have no idea what they are talking about.

They all teach based on what they found worked in their own golf swings and what they learned from those around them. This created a scenario that you know all too well today - everyone in the golf instruciton world teaches something different than the next guy.

For me, this wasn't good enough.

There are fundamentals to everything we do when it comes to athletic movement, and I knew the golf swing had to be no different.

If this makes sense to you, keep reading. But first, let's take a look at my golf swing side by side with Tiger's. As they say, the "proof is in the pudding." 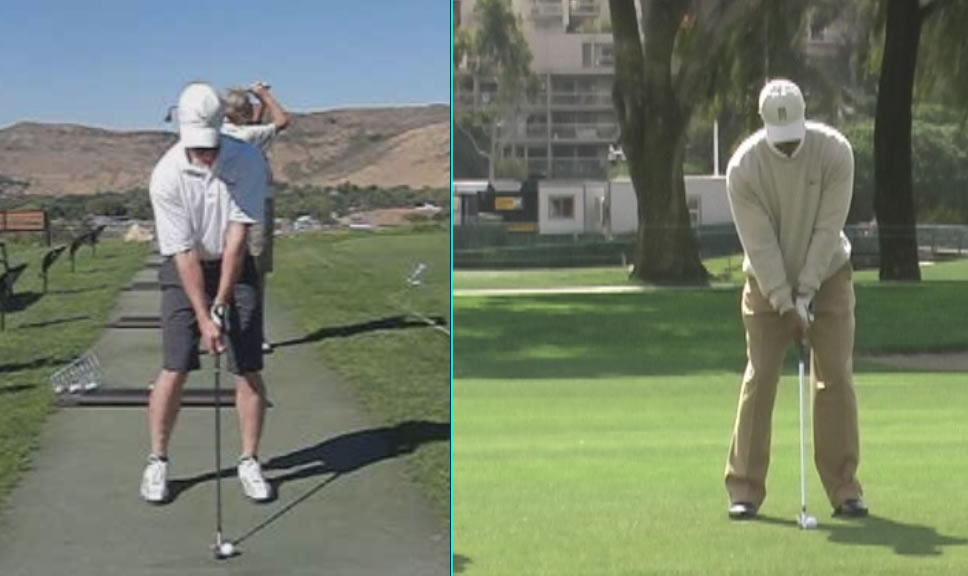 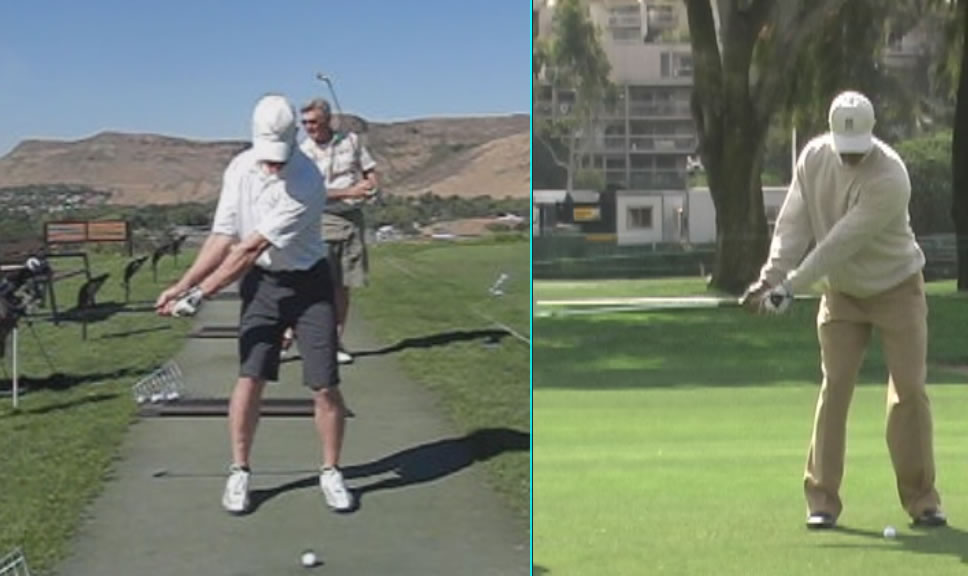 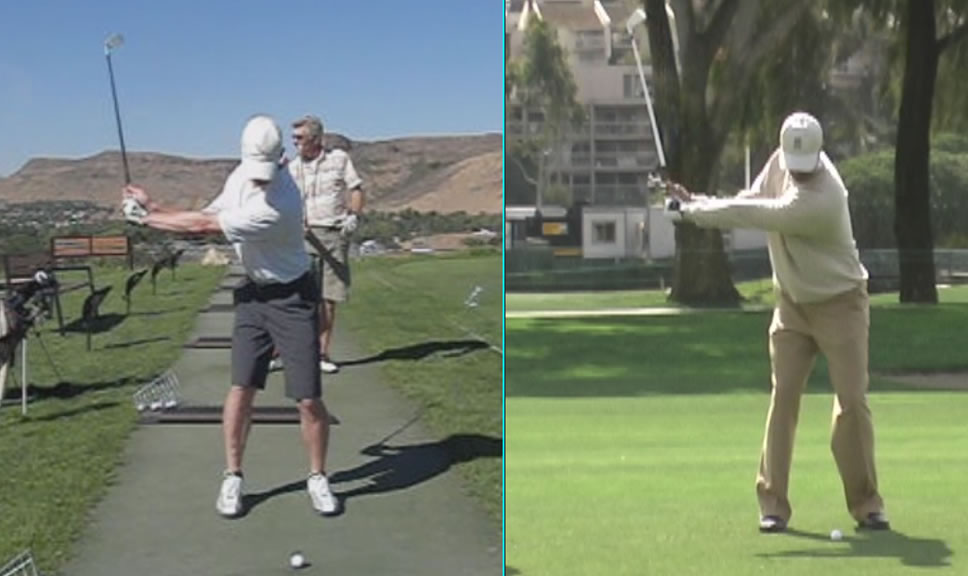 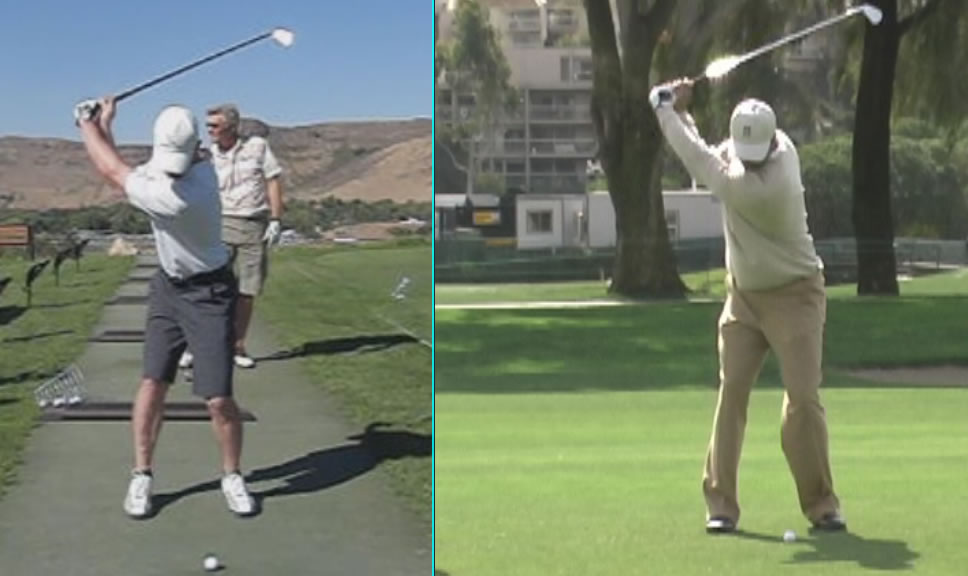 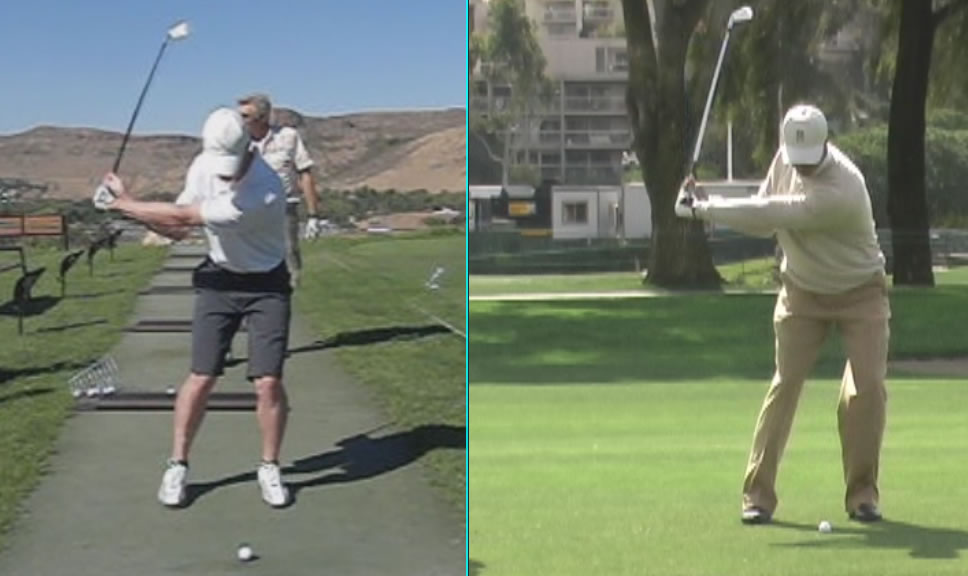 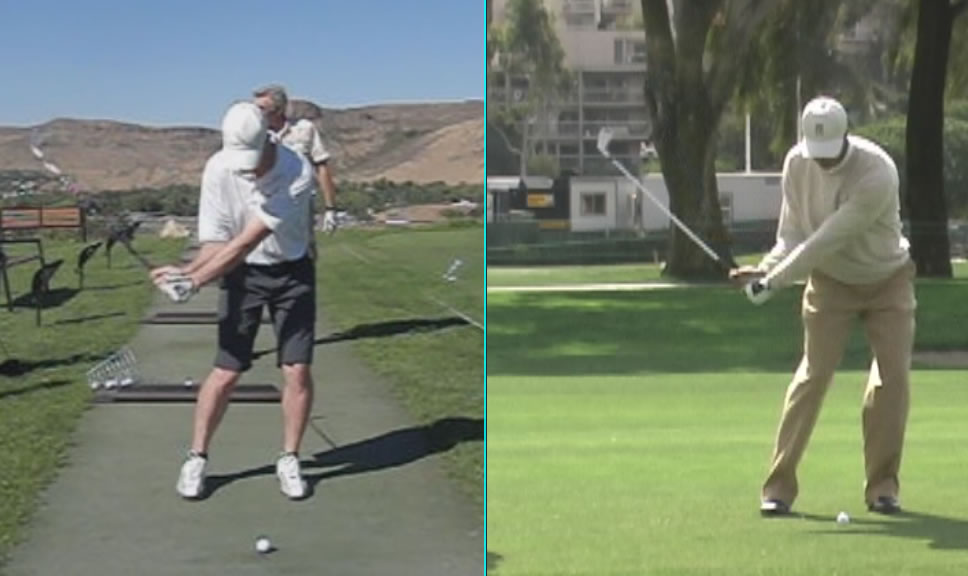 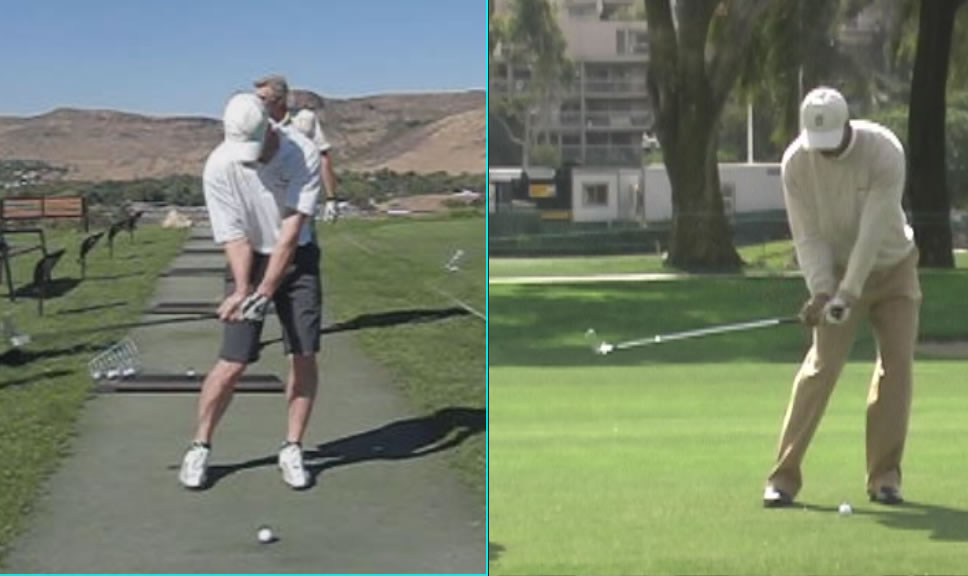 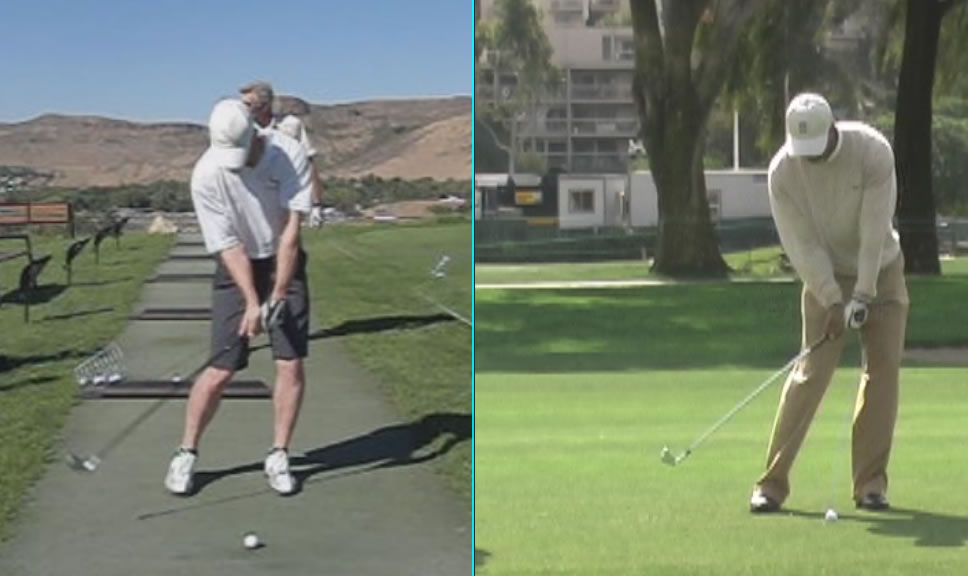 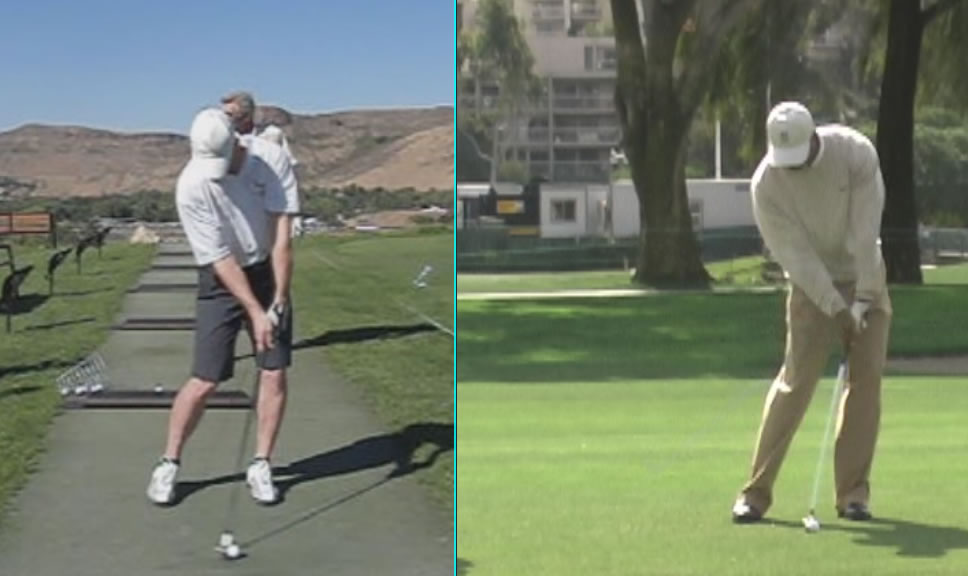 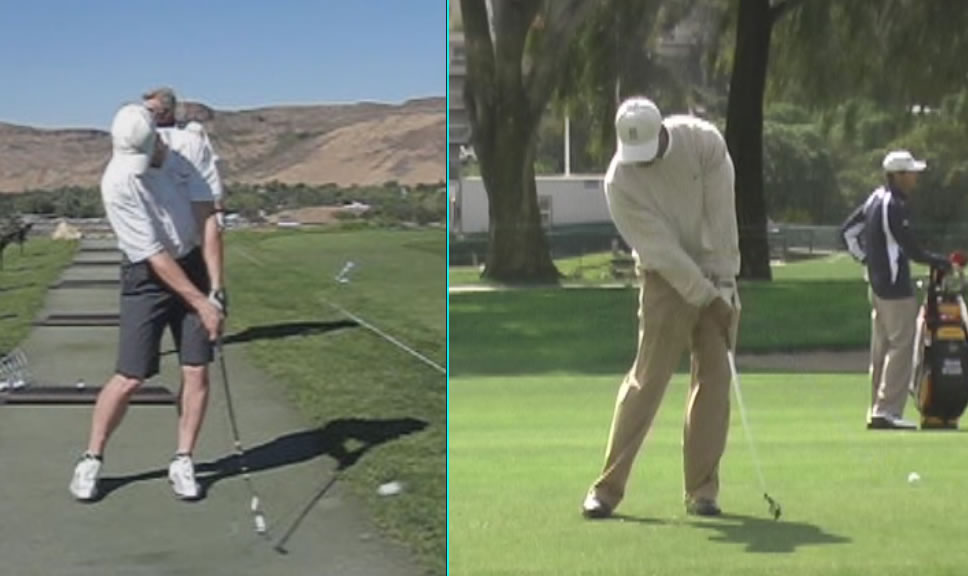 As you can see, I'm an instructor who actually practices what he preaches and can back up what I'm teaching my students with real world experience.

If you're tired of gimmicks, sales pitches and snake oil salesmen, perhaps you're ready to step up to the plate and learn the golf swing the RIGHT WAY once and for all. Build a swing that is based on fundamentals, biomechanics and science using our online learning system.

It won't be easy, but if it was, it wouldn't be very rewarding, and everyone would be doing it.

Still unsure? Why not learn the basics of the RST for free just by entering your email address in the box below?

Looking for an Analysis of Hank Haney's Swing Model for Tiger Woods?

While Tiger was still working with Hank Haney, I wrote a series of articles that covered what Tiger was working on with Hank and published them here on this site. While RST is not directly inline with what Haney teaches, it is still helpful for those who study the golf swing to understand his theories. Below you can access these older articles.

In it's simplest form, Hank Haney wants the shaft to travel on the same plane, or parallel to that plane, established by the shaft at address. The swing is more rotational in nature than the swing Tiger learned with Butch Harmon, giving it a flattish, laid off look at the top, although it is most certainly NOT laid off. Haney's theory behind all this is that it's easier to make a consistent, solid strike and control the clubface if the clubshaft is always on plane.

Let's start with a look at Tiger's Address Position.

Next, let's look at Tiger's Takeaway.

The moment of truth, Tiger at Impact and the Downswing.

Get Your Free Membership to Watch "Using the Core" Right Now!