Today, as promised, we're going to look at the face on view of Chuck's swing. There are just a couple of things to note before we get started. 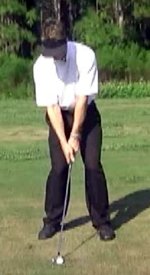 First of all, the camera angle is slightly off on this shot. Chuck is set up a little bit closed to hit a draw, which means the camera is a little farther in front than we'd like it to be.

The camera angle makes it look like the ball is much farther back in his stance than it really is. It's actually on the left side of his head, farther up than it looks from here.

We wanted to use this shot, despite the camera angle, because this is the face on view of the exact same swing we used for the down the line analysis recently. This way we're able to compare the exact same moves from both angles.

As always, we'll start out by looking at the setup. As you know, the ball needs to be on the outside of the left ear, or between the left ear and the shoulder. There's some flexibility there.

We can see that Chuck's setup is pretty centered between his two feet. His spine angle is fairly vertical; there's a slight tilt, but definitely not much.

We're going to take some time to talk about the movement of the head because that's one of the things people find most confusing when we talk about staying centered in the golf swing.

Chuck's head looks pretty centered when we just watch his swing at full speed. Let's slow it down and see what's going on there. We'll draw a line on the left side of the head at address so we can track the actual movement throughout the swing.

We see a lot of golfers who work so hard to keep their heads centered that they actually tilt their shoulders and end up moving the head forward. 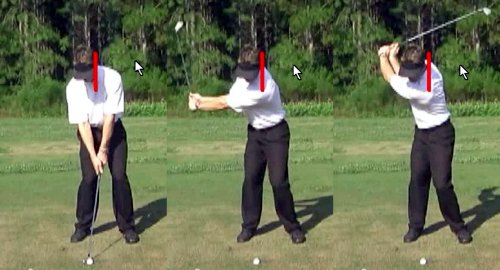 Chuck's head definitely stays centered as he starts back; he's looking at the ball throughout the takeaway. Then when he gets to the 9:00 position, where his left arm is parallel to the ground, his head has to turn a little to allow his shoulders to keep moving.

His chin starts to swivel, moving his head slightly as he gets a little bit behind the ball. He makes a full shoulder turn, gets behind the ball and stays centered. As you can see, it's fine for the head to move a couple of inches.

If you focus exclusively on staying centered - or what feels like centered - you can end up with your head tilting way outside that red line and that's what you don't want, because then you'll find yourself in front of the ball and end up with all kinds of problems in the downswing.

Just make a natural turn. It's fine if your head swivels as you turn back, and it's fine if it moves off the line just slightly. That's just part of making a normal turn. 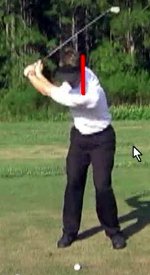 Head is back in position

If you were to turn your shoulders without moving your head at all it would feel extremely awkward. Your body isn't designed to keep the head completely immobile while the shoulders make a great big turn. When you turn your head slightly it frees up your shoulders to make a good, full turn.

Long story short, let your head turn. Chuck's head turns quite a bit from address to the top of the backswing. That's what allows him to make a full shoulder turn.

As soon as he starts to come down from that position his head gets right back on that line. He's turning his shoulders, core, and hips, getting his weight back onto the left side in the transition.

Everything is turning back, but as soon as the head gets back on line it stops and stays behind throughout the rest of the downswing.

The Head Actually Moves Back

In fact, in addition to staying behind the ball as the rest of the body rotates through, there's a dynamic we see in a lot of better ball strikers, where the head actually shifts back away from the target toward the end of the swing.

When the club gets back to about parallel to the ground, the head actually moves back a little bit. We'll zoom a little and get a series of shots so you can see what's going on.

Chuck's head stays centered around his spine on the way back. He makes a good turn and then gets his head right back on the red line as he rotates back down.

He stays behind the ball and lets everything release out in front of him. As he continues to turn through, the head actually moves slightly back, away from the target.

The head stays behind the line until final release

This is certainly not something you're going to be thinking about or do intentionally. It just happens as you release the club properly. The head moves back just slightly as the arms pass in front of the chest and release.

As you can see, the head is definitely behind the red line until very late in the swing. You can see that Chuck has fully released the golf club in the second to last image and his head still hasn't come through.

The club is already up parallel to the ground and his head is still well behind that line. It's the momentum of the club on the follow through that finally pulls him up and forward.

That's the proper movement of the head throughout the backswing.

Width is Not the Enemy

Let's move on to another important piece of the golf swing: width.

Width in the backswing is a second big area of misunderstanding in the golf swing. There's a lot of discussion about width and whether it's good or bad.

A lot of golfers want to try to narrow the width because swinging around the body inherently creates more width. You need to understand that width is not a bad thing. Certainly there is such a thing as too much width, but that doesn't mean you don't need any at all.

Getting too narrow is a major cause of hitting the ball short. We see a lot of students who take the Lawnmower Drill and pull the right arm up so close to the body that they have no width at all.

Their arc is too narrow to generate the amount of club head speed they need and they end up with a very narrow, tight, compact golf swing that requires an explosive downswing in order to get any speed out of it at all. A swing like that is obviously hard to control. 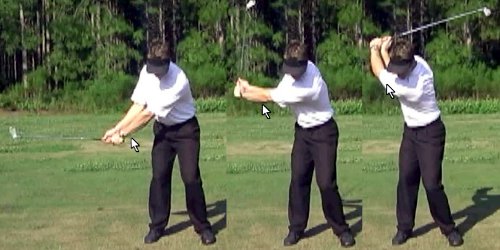 Hands are extended away from the ball

Look at Chuck's extension away from the ball as he takes the club back in the photo above.

We know from the down the line analysis that his right arm is bent in the second photo. This is why we like to use the exact same swing from different angles; the swing looks much wider from face on, but we know the club is actually working around his body at this point.

His right arm is bent and working up, but that doesn't mean it has to be sucked in against his side.

If you look back at old footage of Ben Hogan, his arms were well out away from his body as he took the club back. This is very, very important. Don't be afraid to have some width in your golf swing. It's a great source of power.

As the club continues back we see that Chuck's right arm is definitely more bent as the club reaches the parallel position. He doesn't set his wrists early - in fact, they hardly have any set at all at this point. 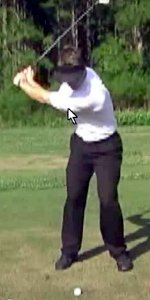 He doesn't do any manipulation going back; his hands stay very quiet and the club is set up perfectly 90°, halfway back.

As he continues back in the third photo in the panel above, notice that his arms have swung behind him, but not by a tremendous amount.

We see a lot of golfers take that left arm and try to get it smashed up against the chest with their arms and hands deep back behind them.

Again, all they're doing is putting themselves in a really bad, stuck position on the way down, where they can't do anything with the club.

As you know from the down the line view, Chuck's arms are definitely on plane at the top. The club is definitely behind him and his hands are deep, but the photo at the right above is what it should look like from face on.

His hands don't have to be back behind his head. If they were, that would be an overswing. Be sure to keep a connection between your arm and your chest, but don't overdo it. 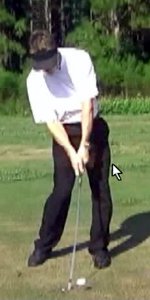 He stays behind the ball and then just unwinds from there.

He makes sure his hands are leading at impact. Of course this shot was a draw, so there's a little more of a release of the club head just after impact than in a straight shot.

Notice that the shaft is stressed at impact. It's bent back, which shows that he didn't flip it with my hands to try and release it. He just struck down on the ball, took a good divot, and released it on through.

Make sure to pay attention to these simple issues.

Width in the backswing and the movement of the head are two critical pieces in the golf swing and a lot of people misunderstand them.