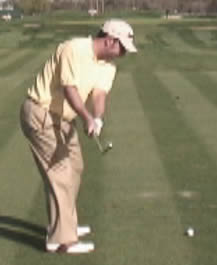 Jose Maria has always been known as a great iron player but a golfer who struggled with consistency off the tee.

In this video, I talk about Ollie's swing and the tendencies that his swing traits cause in his ball flight. His swing is set up very well for iron play but taking the driver back this shut and keeping as much weight on the lead leg as Jose does tends to cause a golfer to struggle off the tee.

Unfortunately, it doesn't just lead to missing shots in one direction with the driver either. A shut clubface, little body rotation at impact and keeping the weight more forward can cause pulls for a lot of golfers, but when a golfer senses the ball is about to go left, he can make compensations mid swing and hold the face open causing the ball to go in the opposite direction.

"Military golf" is the result with the ball going both directions off the tee. 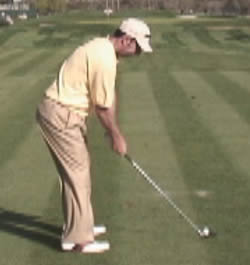 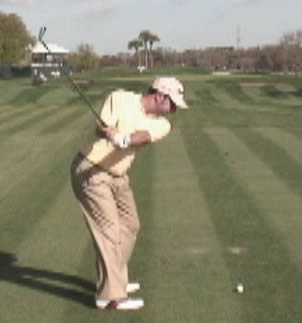 Jose has a great address position, good spine tilt, nothing too radical here, arms hanging pretty freely. He has his weight a bit more toward his heels which puts his arms a little more outstretched than more hanging down.

This address position, where the shin bones, or the lower half of the legs are more vertical shifts the rear further out past the heels and encourages a steeper spine angle.

As he completes his takeaway, the club is "looking at the ball" and never gets behind his hands. He has not pulled his arms in dramatically to his body nor overly swung them around by pulling his right arm behind his body.

Halfway back, the clubface is still looking at the ball, a shut position. Note how much his right leg has straightened and his head has started to move down closer to the ball. This move allows him to increase his spine angle and achieve a feeling of being more on top of the ball and supports his flatter arm swing at the top. 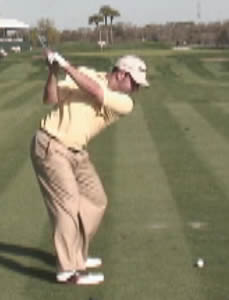 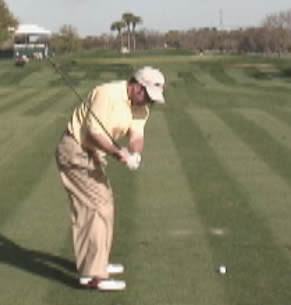 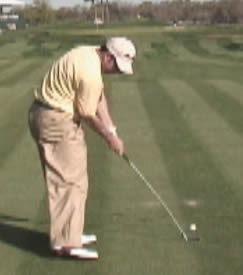 At the top he's in a very good position ready to rotate through, a very solid one plane position at the top. He tends to get the club a little steep on the way down, which you can see in the middle picture, the club above his right forearm. Ideally, you'd like to see it through the right forearm at this point to avoid pulled shots and compensations.

At impact, he's pretty square and has released his arms pretty aggressively right from the top. This has caused the pulled shot as he "forgot his ABT's". He stopped turning here and that is the type of shot you should expect, shots that start left and can continue going more left. 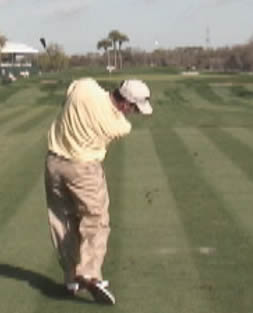 You can see the ball has already started offline just after impact. He hit three balls on this hole during the practice round and all three missed the green left by several yards.

Jose Maria Olazabal has long been known as a more roundish, flattish golf swinger. Of course, now that the terms "one plane" and "two plane" swing are around, he's definitely considered more of a one plane swinger. 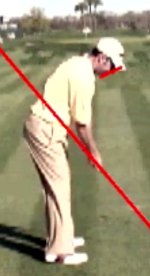 I'm going to take a look at his swing and point out some of the really interesting things in his golf swing. It's a very simple, repeatable golf swing.

Ollie's always been known as being a really good iron player, but a little streaky with the driver. There was kind of a known tendency, several years ago, that Spanish golf was taught to put a little bit more weight on the left leg or the lead leg, then rotate a little bit more around that leg.

Notoriously, the Spaniards were given a blanket of being bad drivers but good iron players, because staying a little bit more on that left leg causes the golfer to strike down a little bit more on the ball. It's easier to trap and compress the ball, which obviously you want to do with the iron, but of course you don't want to do that with the driver. It can cause the ball to spray off the face in either direction.

It's one of the interesting traits of Ollie's swing as well, that he fits that genre or that stereotype of someone who stays a little bit more on the left leg, increases their spine angle during the backswing, stays really on top of the ball, but then isn't known for being a real great driver of the ball, but is generally considered a pretty good iron player. 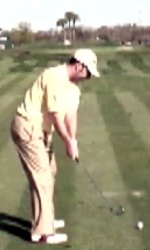 I want to look at his swing here. You can look at it from setup; pretty standard setup here. Nothing really changes form anything else that you'll see with a lot of Tour players. He's got the shaft of the club going right through his belt buckle, his arms are hanging down pretty naturally.

If you look at his spine angle here, we'll just get a rough estimate about where he's at, at address. He's got a little bit of a hunch in here, but reasonably close...30-some odd degrees in here. Maybe 34-35 degrees as a reasonable compromise; not too tilted over. 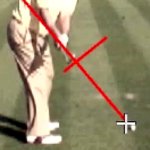 As he continues to go up, he goes right up the shaft plane that he started at address, with the face actually getting shut here. It's very, very, very square or shut at this point, enough to consider that it's still square. It's actually steeper than his spine angle. You can look at the club face angle here, and it's very, very, very closed.

This is great for golfers who want to really trap the ball, to play with a shut club face like this. It makes it really easy to come down on top of the ball, but of course it makes it very difficult not to pull the ball, and you'll see that in Ollie's swing.

This is footage from this year at Bay Hill. On number 6, I believe, a par 3, he pulled all the shots that he hit during the practice round. He pulled to the left. The flag is just over the left side of his head here, and he put them all left of the green, probably a good five yards or so, so about 10 or 15 yards left of where he's aiming. 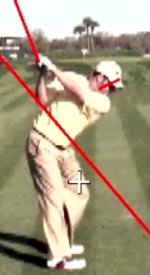 You'll see what causes this. As he continues to take the club back, he's got it right in line with his hands. The next frame is going to go right through his forearm so this is perfect here, a really, really good spot. You can see his head starting to move down past that line where he started at address, so he's actually getting a little bit closer to the ball. This will help him get even a little bit more on top of the ball as he comes through.

At the top of his golf swing, you can see a pretty classic one plane swing here, as far as the left arm and the shoulders being on the same plane, the shaft being laid off, pointing off in this direction here. If you can't see that real well, it's pointing well off in left field, rather than pointing at the target or across the line.

A good position here at the top, then as he rotates you'll notice also that his right leg has really straightened up quite a bit. This fits a lot with what you can see in Aaron Baddeley's golf swing today, who's been playing really well as of late, working with a couple of Mac O'Grady's teachers. 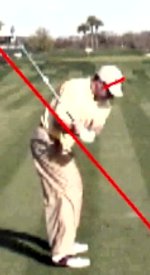 The club is not back on plane

Anyway, as he comes back down you'll see that what causes that little pull is that he never gets the club back down on plane here.

At this point the shaft, if it was just moved over a couple of inches, the ball would tend to go pretty straight from this spot, but because he's coming in just a tiny bit steep and he's very on top of the ball - notice how much his head has moved forward past that line there.

As he continues to come down he also doesn't rotate out of the way, so while the shaft is very steep here from where he had it at address, it's still steep, still above the plane at this point. As he comes down he gets it back on plane here but at this point he's going to be a little bit over it and he's going to start to pull to the left.

You can see that this ball is going to start out left of the target and continue to go farther left as we go through and it leaves the frame. 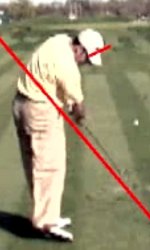 The ball starts out left

You can see pretty cleanly, as he comes down into impact, that he's pretty square at impact. This just doesn't give the club a lot of room to swing from the inside, as the hips are still very square, the shoulders are still pretty square.

The right arm stayed back behind his hip just a bit, but he doesn't really have a lot of room to swing through here because his hips are still pretty much in the same position, or close to, where they were at address and his shoulders also haven't cleared.

He's going to tend to hit a lot of pulls here, which he did this week as I followed him around several more holes.

A great, great golf swing to take a look at. He comes around to a good, full, relaxed finish. A very aggressive golf swing; keeping the club face shut like this as you take the club back makes it possible for you to be really aggressive, as you're not waiting to release the hands and release the club face, square it up through your hands or through the rotation of your body. 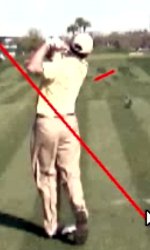 You can just pretty much go to the top and swing down as hard as you want, but of course you've got to watch out, as Ollie does here, you'll tend to hit a lot of pull shots.

I'll play the swing a couple of times in full motion so you can take a look at it. It's a very quick, aggressive swing, quick tempo. He takes it back and through very quiet. As we mentioned he takes it back shut, and then just rotates, throws his arms at the ball, throws the club at the ball very hard from the top. This is the kind of ball flight that you can expect from that type of golf swing.