Today we're going to take a look at Peter Jacobsen's golf swing from the face on view and talk about some of what makes his swing unique and interesting. 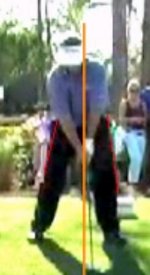 This swing is from January or February 2006, and shows us some of his one plane moves.

As you can see, the left side of his head is about two or three inches behind the ball. He's pretty centered here. His spine is fairly vertical - he hasn't tilted excessively away from the target. His shoulders and waist are as horizontal to the ground as they can be.

It looks like a very sound address position. He's got a little bit of angle in the right leg for support and stability as he braces into that side on the way back. Overall, it's a pretty stock address position.

If anything, the shaft is leaning back a little bit with this club - this is a three wood off the tee - but other than that everything's pretty standard. 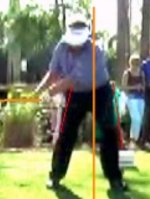 Club parallel to the ground

There are a few things to note by the time the club is parallel to the ground.

One of the things Jim Hardy talks about is not having a lot of width in a one plane swing, but we can see that Peter still has a fair bit of extension down the line with his club at this position.

He's several inches away from his right hip pocket, so he obviously doesn't wrap the club around him or take it excessively to the inside.

His right arm isn't fully collapsed at this point, and his left arm is still fully extended. There's bend in his right elbow, certainly - it's easier to see from down the line - but it's not excessively bent or wrapped in. 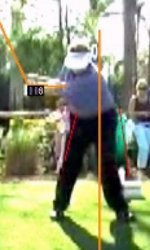 It's good to see this here, because a lot of amateurs misunderstand Hardy's advice, thinking they need to take the club in so close to the right hip that they reduce all the width in their swing.

Width still creates power in the golf swing; you have to have some width, and you can see that clearly in Peter's golf swing.

The other thing we notice as he continues up to the top is that there's very little wrist cock when his forearm is parallel to the ground. You can see in the photo to the right that he's taken very little time to cock his wrists at this point.

Most golfers, particularly two planers, have the shaft in a vertical position at this point. It makes for more of a balanced position, but the advantage of Peter's position is greater control over the hands and wrists because they are not excessively cocked. This is something we also saw in Ben Hogan's golf swing.

It's easier to control the release of the club, which is something Peter does very well. When we get to the downswing you'll see that his left wrist is extremely bowed; this makes it easier to maintain that.

Big Shift to the Right 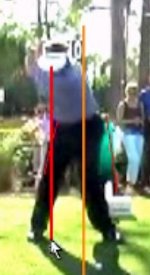 As he gets to the top, ready to start his transition, we see that he hasn't shifted his hips much at all, but he has made a big shift into his right side.

His head has probably moved back a good five, six inches. The red line in this photo starts at about the center of his head. We can see that he's almost over his right foot, and definitely over his right knee. He's made a significant amount of head movement and his spine has angled back quite a bit from the target.

Hardy, of course, emphasizes staying much more centered. We can see that Peter's hips have stayed very centered, although he does have quite a bit of head movement on the way back.

As he comes back down we see him making a really aggressive squatting move to get his weight onto his left side. There's a little bit of hip movement there as he really gets his weight back onto the left side before the club starts back down. His transition really emphasizes getting that weight shifted over. 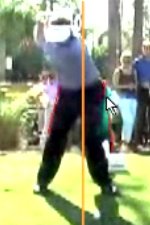 Squatting into the left

As he comes back down toward impact his hips continue to move, right up until the club is parallel to the ground again. He makes a lot of lateral movement.

A very good thing in his swing at this point is getting his head back on the orange line as he comes down to into impact. Despite shifting off the line a great deal, he's gotten right onto the line, but with his head significantly lower.

As he keeps coming down into impact, another thing we see is an extremely bowed left wrist. Having the wrist this bowed at impact makes it very difficult to release the club without hooking it dramatically. 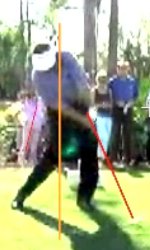 The left wrist is still bowed at impact

With a wrist this bowed and a club face presumably pretty closed coming into impact, this is not going to be a golf swing that lends itself to releasing the club head and letting the hands turn over. We'll see that in the final stages of his golf swing through impact.

The photo at left is just after impact. We can see that he's moved quite a bit ahead of the orange line, but the left wrist is still significantly bowed.

The red line traces the shaft of the club up through his hand, showing that the left hand has basically arched and left the club, while the right continues to drive through.

His left hand is certainly not clamped down on that club because the left wrist simply can't get into that position. His left wrist is practically vertical while the shaft is still at the angle shown in red, so the logo on his glove is almost facing the target.

If Peter were to release his hands aggressively he would certainly hook this ball dramatically to the left, but fortunately he doesn't. He keeps his left wrist really excessively flat and bowed, continuing all the way up into his follow through. 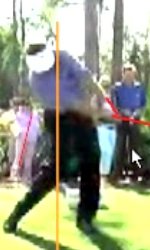 The left wrist is still arched

He's really keeping that club from releasing and turning over, in order to keep it from going left. This puts his left arm in a much higher position above his right, getting the shoulders very steep on the way through, another trademark of Hardy's swing.

As he continues to come through, his right hand finally starts to release over his left and up into the follow through as he comes up to a full, balanced finish on his left side.

There's a lot to see in Peter Jacobsen's golf swing. There are many interesting things to learn and analyze and hopefully get a better understanding of what Jim Hardy is trying to get you to do in his one plane swing.

Get Your Free Membership to Watch "Left Arm in the Golf Downswing (LADD)" Right Now!