Even the lay person golfer has probably noticed that Tiger's takeaway rehearsals are something that are very unique. You can often see him rehearsing his takeaway with what appears to be an exaggerate rotation, or "fanning" of the clubface wide open.

For golfers who fight a slice, rotating the clubface open during the takeaway is something that would seemingly cause nightmares, so why does Tiger do it?

There are two key elements to Tiger's takeaway that can be seen from a down the line view. One is the aforementioned clubface rotation and the other is that the club works back on the same plane it was on at address. Note the picture below.

You can see in the picture of Tiger on the left how he has taken the club back on the exact same plane that the shaft was on at address and has rotated the face very open as dictated by the yellow line. In the picture to the right, you can see me doing the same thing in my takeaway and it is a little more clear to see the clubface angle at this point in the swing. 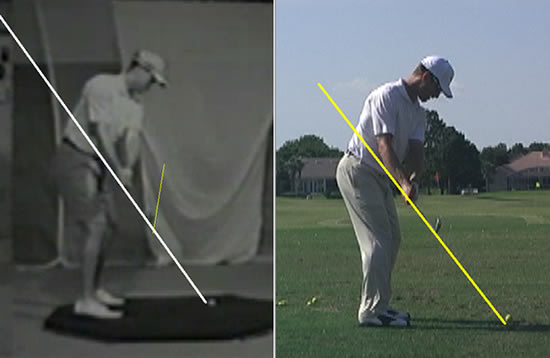 The reason this seemingly drastic amount of rotation occurs is that this is the only way to keep the club traveling on the same plane all the way to the top of the backswing.

If the clubface were more square or shut going back, it would work more upright and have a tendency to want to get across the line. Because Tiger has always loathed getting "stuck" during his downswing, this one of the major contributors to fixing this ailment.

When the club gets across the line at the top, it wants to get steep on the way down. A golfer overcomes this by shallowing out the the path of the club from the top to approach the ball from the inside. Of course, if this gets a little off, the clubface can be left open and behind the body during the downswing creating the dreaded "stuck" position.

As the club continues back, Tiger strives to continue the rotation of the club open to keep the club traveling back on the same plane, or as we'll see later, parallel to that plane throughout the rest of the backswing. In the photo below, the clubface is in line with his hands and the left arm is continuing to rotate going back. 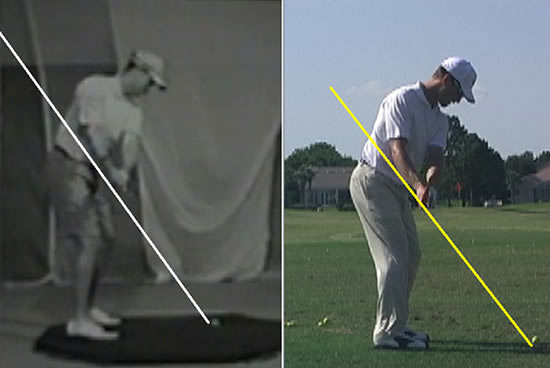 As we'll see at the top of Tiger's swing, he never gets across the line anymore and the plane the club is taken back on and the clubface rotation is what allows him to do that.

Even though the club has only travelled back a few feet, the takeaway is a critical component to Tiger's golf swing that must be performed correctly for Tiger to maintain the same plane or parallel plane back and through.

How This Differs for Tiger

Also different for Tiger is that his left arm works more straight back rather than out away from his body at this point. Tiger arms are more connected to his turn than in years past, although certainly not to the degree of a one plane swinger. These moves put Tiger in a very neutral takeaway position with no wasted movements or exagerrated positions.

Tiger Woods Swing From Face On

From the face on view, you can see that Tiger still has a lot of width in his swing. When the club is parallel to the ground, Tiger's wrists have barely began to set the club and he has moved his hands a great distance away from his body creating the beginnings of a very wide swing arc. 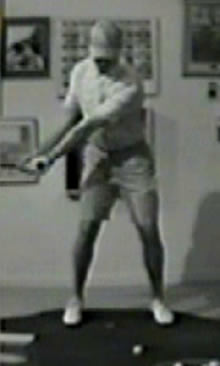 It is important that you work on the aggressive rotation of the left forearm during this early stage in the swing. By the time the club is parllel to the ground, the clubface should be open to the point that the toe of the club is actually pointing to about 11 o'clock when viewed from down the line.

At first, this move will feel very strange as it is a significant amount of rotation that happens very early in the swing. This rotation must continue all the way to the top as you'll see in the other sections.

It is also important that you get the club working up on plane right from the start. Placing a shaft in the ground at the same angle as your shaft at address will help guide your backswing to work up on the proper plane, but it is really necessary to use the aid of video to help groove this motion.

Get Your Free Membership to Watch "Golf Takeaway, 5 Minutes to the Perfect Golf Takeaway" Right Now!