Tiger Woods' golf downswing was one of the best in the business before he started working with Sean Foley, which in my opinion, is what destroyed Tiger's back (here's video where I predicted Foley's teaching would injure Tiger Woods' back all the way back in 2010 - Tiger Woods Swing Change May Injure His Back. But before the switch to Sean Foley, Tiger had a pretty solid downswing move. During the first half of the golf downswing, Tiger swings his arms back down in front of his torso while keeping his shoulders quiet and shut to the target.

This feeling is critical, and one that I describe in my video on the Golf Downswing Overview here. Feeling like you keep your chest pointing behind you as long as humanly possible gives your arms the time they need to drop back down in front of the body while allowing the hips to unwind the shoulders.

Tiger's lower body makes a lateral move to get more weight on to his left side with his head moving slightly toward the target, but for the most part, his body remains in the same position during the first step of the downswing to give his arms time to work back down in front of his body.

This is critical as it keeps the club and arms moving in sync with the body to avoid the club getting stuck and coming into impact "late." 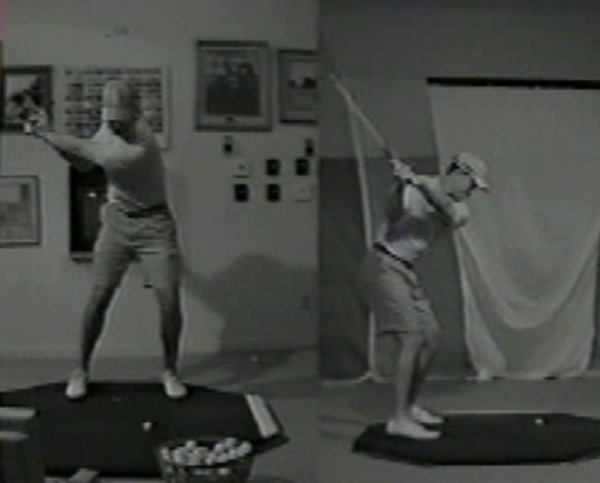 At the start of the downswing, Tiger works to bring the club and his arms back down in front of him while transferring weight to his left side and keeping his shoulders quiet.

As Tiger continues moving the golf club back down, he keeps the club parallel and above the original shaft plane established at address. His hips have turned very little by this point ensuring that he doesn't "outrun" the club on the way down. Many amateur golfers and even a lot of professionals push very hard off the trailing leg and this causes the hips to "spin out" while also causing the shoulders to open too soon.

In the next frame, you can see just how aggressively he has shifted his weight into his left side. The lateral movement keeps his hips from spinning out and turning too fast, which would leave the club behind him and in the dreaded "stuck" position.

You can't really "slide" and "turn" too well at the same time, one will tend to over power the other in most golfers, but in Tiger's case, this slide is a critical aspect of his swing as it serves many purposes.

For instance, if he just rotated from the top, he would bring the club down both above the plane and too steep as so many amateur slicers do. The lateral move helps to both shallow out the path of the club and give him time to get the club back in front of him as you can see in the next frame. 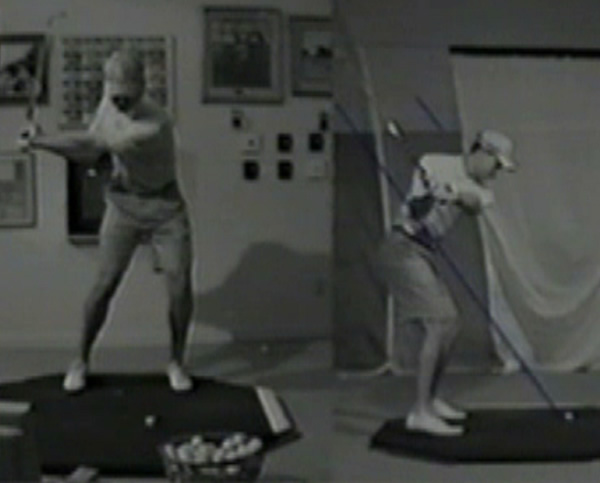 Note how much Tiger has moved into his left side as the club is about halfway down. Note also that you can still see his left leg in the down the line view indicating that he has rotated his body very little compared to a one planer such as Ben Hogan.

As Tiger continues working the golf club down, you can see in the down the line view below that the golf club is just about parallel to the shaft plane at address at this point and his shoulders are still not rotating aggressively to ensure the club comes back down from the inside and in front of his body.

Face on is a wonderful view of the spacing Tiger maintains on the downswing. Many golfers admire the look of Hogan or Garcia at this point with a very narrow downswing and tremendous lag and associate that with power.

Obviously, Tiger doesn't powder puff the ball around, so he's a pretty good case in point that golf swings also need width to generate speed and get the club back in front of the body.

The amount of lag Tiger maintains here is optimum for control in his golf swing. Any narrower and he would have to do a lot more work with his hands in the downswing such as Hogan's suppination or use a very strong grip such as Sergio's to square the face. 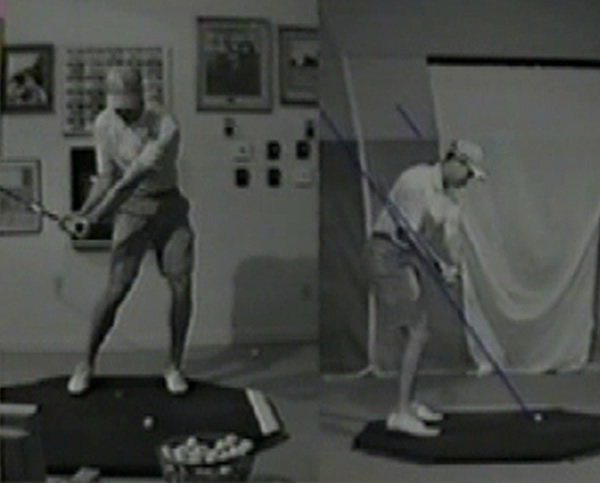 Good width and spacing on the downswing and the shaft through Tiger's right forearm set him up for a simple delivery in to the ball.

At this point, Tiger has the golf club back exactly on the shaft plane from address and his shoulders are still slightly shut. He's continuing to work his hands in front of the ball and has still maintained a lot of width in the downswing as seen from face on. 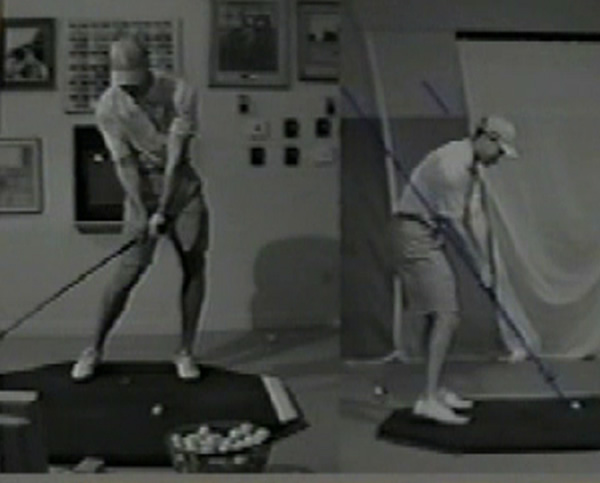 Lastly, the golf impact position. Tiger has his hands ahead of the ball and the shaft returned perfectly to the address position from down the line. His shoulders are square to the target and his hips have not cleared excessively.

From face on, you can see that Tiger's right heel works slightly in down the target line. This keeps his body grounded and allows him to generate force from leveraging the ground rather than just spinning out his hips. 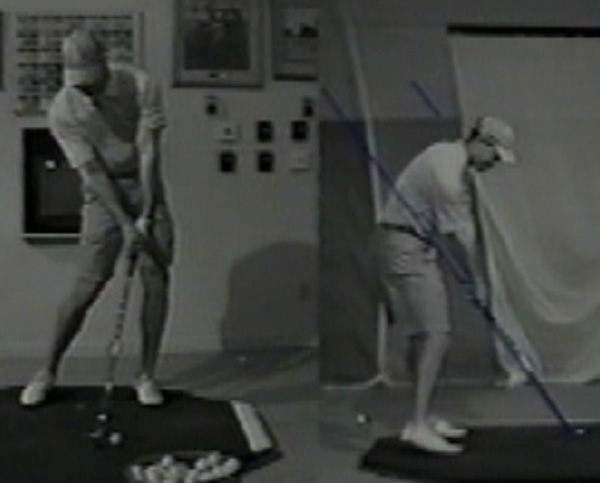 Tiger is in an ideal two plane impact position here with his body more square to the target and hands back in front of his chest.

Get Your Free Membership to Watch "5 Minutes to the Perfect Golf Downswing" Right Now!