Much discussion and debate has occurred over Tiger Woods new, more rounded backswing. Some confusion has come from people believing that Tiger is now a "one plane" swinger, which, is sort of true, but NOT by Jim Hardy's definition.

What is "one plane" about Tiger Woods' swing is that his swing plane is dictated by his shaft plane at address as he swings the club on, or parallel to, that plane throughout his entire golf swing. He shifts to a plane that is parallel to the address shaft plane right after the takeaway is complete and continues up parallel to that plane to the top of his swing as can be seen in the photo below. 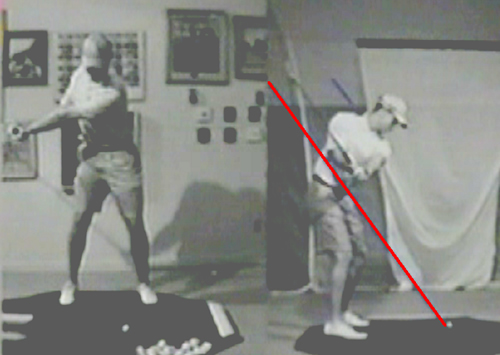 In the photo above, you can see Tiger has shifted to a plane that is parallel to the shaft plane angle he established at address as indicated by the red line.

In order to do this, he has swung his arms slightly more around than he did when working with Butch and the club rotates open during the backswing to achieve this flatter plane.

As a side note, during the telecast of the 2006 Tour Championship that Adam Scott won, one of the announcers mentioned that Butch Harmon had told Adam to start "fanning the clubface open" during the takeaway because it was lagging behind his hands too much during the takeaway.

If you've watched much of Adam this year, you can see that he has started getting into the more laid off position similar to Tiger's at the top and now adding the fanning during the takeaway will go a long way to reshaping his swing to be very similar to Tiger's.

Whether they admit it or not, when Tiger makes a change, people on tour take notice. At the 2006 Masters, I watched at least 4 players working on rotating the clubface open on the way back and getting more laid off at the top, one of which was Padraig Harrington. While he drilled this in his practice swings, his real swing did the exact opposite. Changes can be tough...

Anyway, back to Tiger. From the face on view above, you can see Tiger has hardly moved his hips, a credit to his superior flexibility and hip and core stability.

He maintains a lot of width during the takeaway as he's always done, but one thing that is different is how early his right arm dissappears beneath his left. This is a by product of his rotation of the forearms and clubface clockwise throughout the backswing.

As he gets to the top of his swing, we get to see one of the reasons Tiger's swing looks both so different and so efficient at the same time. 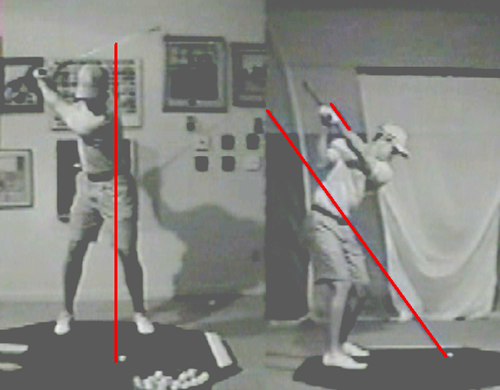 At the top of his swing, Tiger is certainly in a flatter position with his left arm in relation to his shoulders than in 2000, but what is unique is that the left arm, shaft and clubface are all perfectly parallel to the shaft plane he established at address, creating the "laid off" look at the top of the swing.

It is NOT a laid off position, if he continued to turn, the club would end up pointing down the target line, so it is simply an illusion created by the overall movements of the club and the shorter backswing.

Tiger's swing from face on appears very compact and under control. His hips have turned only minimally and his left arm has stopped at about 10:30 if viewing a clock from face on.

Because of the more roundish nature of his new swing, many people have confused Tiger with being a "one planer". At the top of his swing, while he is much flatter, his left arm is slightly above his shoulder plane, although minimally.

He certainly has a spine angle steep enough to be a one planer and a great shoulder plane at the top, but Hank Haney doesn't care whatsoever about the relationship of the shoulders and left arm, so this is really not by design. He is solely interested in the movements of the club throughout the swing, so this is, in a way, merely coincidence regarding the similarities.