Combine the Clamshell Drill with this right knee trick to give yourself more speed in your downswing and help you maintain your posture to stop losing the tush line.

Injury Prevention in the Golf Swing

How to Fix Your Swing Plane and Over the Top Move

How to Learn the Golf Swing

What are Golf Swing Fundamentals? 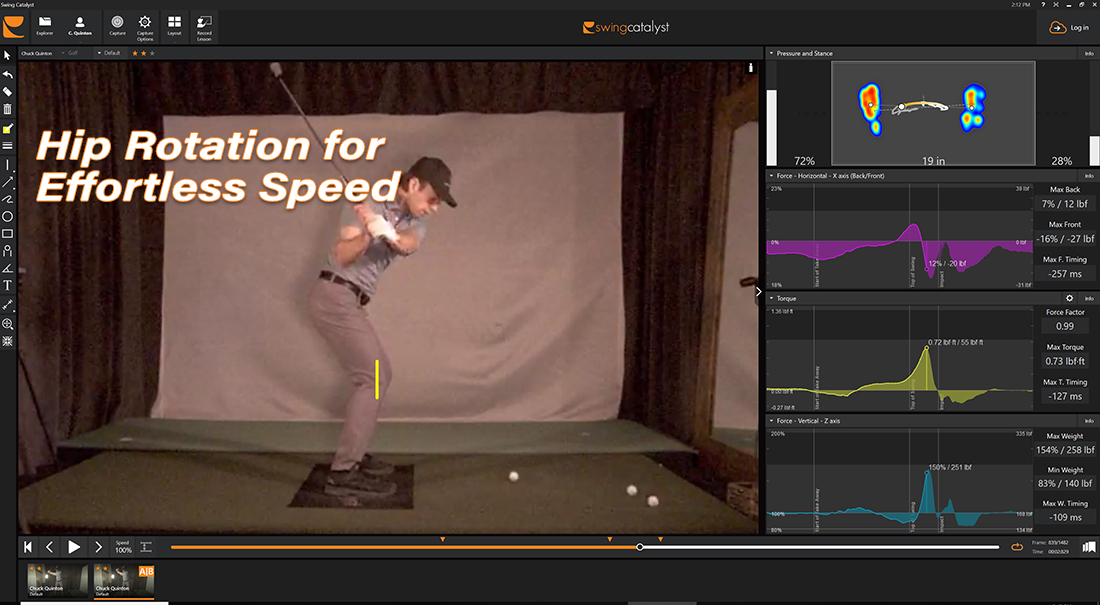 In part one of the video, we talked about how this right knee works in the golf swing and some of the best players in the world. And we could go through dozens and dozens of tour pros, you're going to see the same things over and over again. And especially when it comes to power, those golfers who are really hitting the ball really well, really hard and really high  you're going to see this over and over again. And the reason for this is that this allows the angle of attack to shallow out for higher launching and thus, longer drives. As you come through, as you saw in Brian Gay swing, if you tend to just swing down with the arms or if you're that type of golfer where this right leg straightens, and you just throw the club down, you're going to tend to hit down on the ball pretty sharply. And that's going to cost you a lot of distance with the driver and make it harder hit long irons.

So in order to do this move, what you need to understand is this, again, more than one way to skin a cat, but the basic idea is that as you're coming down, if you remember from the Clamshell Drill, that we, we focus on getting that right hip to go back in the backswing. You saw in Dustin Johnson's swing that right, and he really extends back a long ways and many golfers. You're going to see it not move nearly as much in my case, I don't really move it a lot. It doesn't really matter. It's just really about getting that hip back. And then as you start down, this is where the money is made from here. Most amateurs will tend to drive hard. If they're going to try to use this right side to help produce power, they will drive hard off this right foot and drive the pelvis into the ball.

And of course this leads to early extension. So you can't do that. You can't just push hard this way off your right foot. That's going to cause you to stand up. So instead, if you remember from the clamshell drill, once that right hips back on the chair, the left hip, then also kisses the chair. So now both butt cheeks are on the chair and you'll see, as I do this, my right knee is moving forward. Now I'm not actively trying to move my knee forward. That would obviously cause me to move my pelvis or move my pelvis into the ball. Instead, what I'm doing is my left hip is going back. Obviously, nothing changed. Whether you're going to add a lot of right side into the, to the swing, or you're just going to feel all left side dominant. It doesn't matter. The left side, still leading everything.

And then as you unweight this right foot, you'll see in the tour pro data. If we look at the swing catalyst that 90% of their weight will go to that left foot, the lead foot during the transition. So this legs getting light, the trail, it gets light. And so as I'm doing that, and my hip is going back, both hit, especially the left. One is going back to get onto that chair during the clamshell drill. That's, what's bringing this right knee forward, but I can also do it by beginning to help drive that right hip through. If you want to get a lot of re hip rotational speed, then you can use this right side to help speed that up. As I showed you in my swing, where did both the left side and right side on the one on the left, the left hip, who was doing all the work and my right leg was just pretty chilled out on the second one.

I wanted to add a lot of right side. And so you saw a pretty big increase in that right knee flex. And that was helping me drive my right hip through the ball a little bit. You had to be careful with this. There's a lot of tour pros that do this, but if you're really aggressive with it, you can really get a lot of side bend. Now there's ways to reduce side bend by doing other things. If you still want to add a lot of right hip, if you can add a little bit more shoulder rotation out a little bit more right arm, which will stall the hip out earlier, you won't get quite that open. There are things that you can do, but just be mindful of it. If you're going to use this right side to help your swing, to help produce some speed, then be mindful that you're not getting into this crazy side bend position.

Like you see so many of the younger tour pros. You can do that for a while, but eventually it's pretty tough on the old back to keep getting your hips that severely open and then keeping your shoulders back and creating this massive amount of side bend with rotational twist in there. The easiest way to think about it again is the right knee needs to go forward, but not because you're actively moving it forward. You'll see if I did that. That would instantly move my hip off the chair and the clamshell drill. So again, put this move together with the clamshell drill, put a chair back here, work on keeping during the transition, getting both butt cheeks onto the chair. And then as you keep going through that, right knee can keep help moving forward to get your pelvis through the ball, because if you're hitting the ball and you look like this at impact, right where your hips are pretty much dead square, perhaps this right leg is straightened up.

You're costing yourself a ton of distance. You have to get your hips open. I, as I go through this list of the, you know, the top 10 things that you see, the modern tour prayer player, do their hips being very, very open and impact is one of those key things. And I think a lot of golfers don't really understand how to get those hips open. We'll talk about that, but this is one of the keys. If you're just going here and then just pushing laterally forward and straighten this knee, your hips are never going to open, but if you just start to understand how to do this move with combining that with a clam shell drill, to let this right leg get light, they'll let the knee relax and come forward. As your hips are going back, you can add a little bit of right side push, just be careful of the side, bend that you'd get in there and do this in a way that you feel light and quick.

Don't make it this heavy thing. I see a lot of times when students are submitting drills and they're, they're going like, and they look super tight and tense. And, and perhaps that's my fault. A lot of times I'm dimming the street, demonstrating this stuff. I try to exaggerate some of these moves. So it's easier to see, but the route is you gotta move quick. It's all about quickness and lightness and speed. Not about being heavy and producing a lot of pressure and force. If you go back and at the part one video of my swing on the right the vertical ground force, there was about 260 pounds of ground force. And I weigh about 160 pounds. So I'm producing a lot of force, but that swings happening very quick. I'm not trying to like push hard into the ground. I'm moving quick. And that's, you can, you still create a tremendous amount of ground force by moving very quickly. So keep that in mind, as you're doing this, don't try to get in there and make these drills all perfectionistic and say, okay, I gotta put my hip here and do this. And now you feel all tight and rigid. You've got to be fast. You've got to be light. So if you keep that in mind, as you're doing this, it should look a little bit like this.


JOIN OUR 402,222 MEMBERS AND GET INSTANT FREE ACCESS TO DOZENS OF VIDEOS!

Get Your Free Membership to Finish Watching "#1 - How to Move the Right (Trail) Knee Like the Pros - Part 2" Right Now!

Get Your Free Membership to Finish Watching "#1 - How to Move the Right (Trail) Knee Like the Pros - Part 2" Right Now!